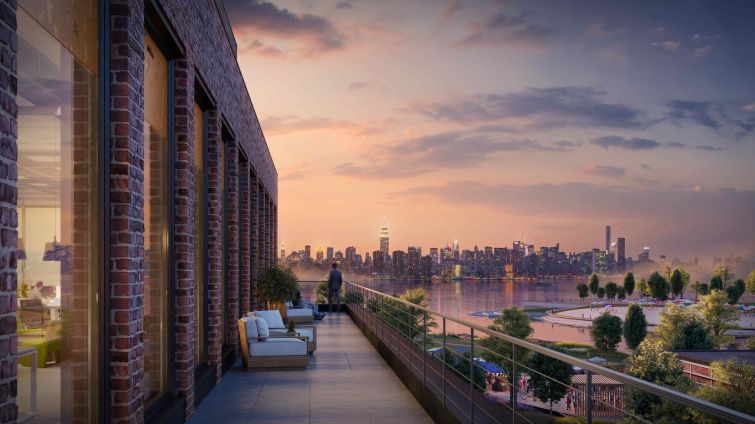 A rendering of the terrace at 25 Kent Avenue (Courtesy: Rubenstein Partners). Cathy Cunningham

Wells Fargo and Natixis Real Estate Capital have provided a $197 million construction loan to Rubenstein Partners and Heritage Equity Partners for 25 Kent Avenue, a mixed-use commercial and industrial property in Williamsburg, Brooklyn, as first reported by the The Wall Street Journal.

The new debt will finance all development costs of the eight-story, 482,424-square-foot Class A building, which will occupy an entire block next to the East River waterfront.

“Our vision of developing 25 Kent Avenue to reignite Williamsburg’s entrepreneurial tradition started some four years ago, and takes another major step forward with the financing we need to start construction,” Moskovits told Commercial Observer. “The city’s expanding creative and tech-based companies have a rare opportunity to create a flagship presence that extends beyond an office location in Williamsburg, tapping into a history and present that captures the spirit of entrepreneurship that is unique to Brooklyn!”

Rubenstein has transacted with Wells Fargo across its portfolio, but the deal is the developer’s first time working with Natixis, Jeremiah Kane, Rubenstein’s director for New York City, told CO. “Both Wells and Natixis demonstrated a commitment to spending the time and effort to understanding a new office market,” he said.

Kane described why the project was especially attractive to the lenders at a time when construction lending has slowed. He said that the appeal came down to the sponsorship and Rubenstein’s track record in developing offices along the East Coast, as well as the project’s location. “We believe that the site is perhaps the best location in Williamsburg: waterfront, incredible views, directly adjacent to the five new hotels either open or about to open in the area, close to parks, and the lenders agreed,”  he said.

The New York office of JLL advised Rubenstein Partners on the financing, with Max Herzog and Marko Kazanjian leading the team.

Officials at Wells Fargo, Natixis did not immediately respond to requests for comment. JLL declined to comment.