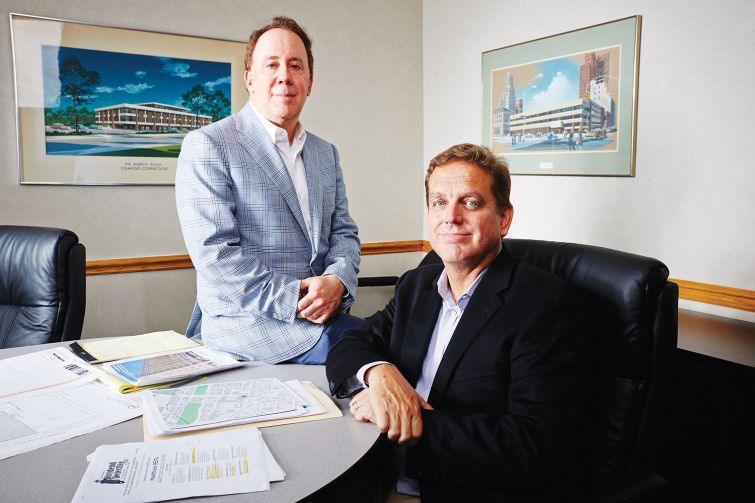 Since the duo formed Altman Warwick in 2004, they have arranged financing on every asset type imaginable from a wet-laboratory building in New Haven to luxury retail centers in New York. To date, the firm has arranged, structured and closed more than $16 billion in real estate financing including debt, mezzanine and equity. The brokerage’s namesakes sat with Commercial Observer and chatted about what’s keeping them busy, the lending trends they are navigating on behalf of clients and the equity financing platform that they are on the cusp of rolling out.

Commercial Observer: How did you two first meet?

BW: We met in the late 1990s. I was at a mortgage company, and Bob owned a mortgage brokerage firm [Mortgage Funding Corporation] with another partner. I met them at an industry function on Long Island. We got to talking, and I ended up joining them and running the debt placement side of their business. We worked together for a few years until Bob and I formed Altman Warwick in 2004.

What was your first big deal together at Altman Warwick?

BW: It was 300 George Street in New Haven—a 10-story, 520,000-square-foot bioscience lab and office building located adjacent to Yale University. This was in 2004, and since it was one of the first multistory wet-lab buildings to be built in the U.S. and the developer was a prominent, old-line New England real estate family, it was a very high-profile deal. Our client was seeking a 20-year, self-amortizing loan, which we placed with a pension fund. The property type was unique in that in order to accommodate the intensive electrical, air-handling and liquid waste disposal requirements of biotech tenants, the developer invested an enormous amount of money to vertically distribute these services to the tenants. In addition, there were tenant improvement investments between landlord and tenant of upwards of $400 per square foot for the lab spaces. Although Yale University was a major tenant, they were under a short-term lease. So our challenge was to convince lenders to lend a high dollar per square foot on a hyper-improved vertical lab building in a small and unestablished office market—in absence of any comparables or any long-term lease commitments from Yale or the other tenants, who were principally biotech startups.

RA: We wanted this financing assignment so much that before it was awarded to us, we actually created a 40-plus-page draft offering memorandum, which we brought to our meeting to pitch for the exclusive. The extra effort paid off.

How has your deal pipeline changed since then, in terms of the transaction size and also the types of deals you’ve worked on?

RA: We are generally in the market at any given time with approximately 20 to 30 transactions. Over the years we’ve seen an increase in both the quantity and size of our transactions. We will be closing shortly on our second nine-figure deal this year. Our clients have grown with us and are doing larger deals. It’s also function of values going up so much.

Historically, retail has been a very strong niche for us. We have financed high profile retail properties such as the Americana Manhasset and The Bay Terrace shopping center. The Americana Manhasset is the one of the highest performing suburban luxury retail centers in the United States. We have also financed high-end urban retail property in places like the West Village, Soho and Waikiki Beach in Honolulu, Hawaii. Our deal sizes have ranged from a 1-million-square-foot big-box retail center in Commack, N.Y., all the way down to 30,000-square-foot unanchored strip centers in rural areas of the Southeast. We’ve run the gamut in all sectors of retail property types.

In general, we work smart and have a lot more control over our transactions than when we first started. Our clients commit to us, and we commit to getting them the best deal available in the marketplace.

Have any properties in your portfolio gone through re-purposing?

BW: We have done several permanent loans on shopping centers that been de-malled and repositioned into open-air centers. We are working on a $55 million refinance of a mixed-use building on Broadway near New York University. It has been repositioned over the past four years. We arranged both the debt and the equity and put a marriage together with the operating partner and a real estate investment trust. They monetized certain parts of the property to generate more cash flow by buying out rent-stabilized tenants and renovating units and by investing in the retail space.

Which other projects are keeping you busy right now?

RA: We have an exclusive $60 million assignment to refinance a 250,000-square-foot office building property located in the Bronx, near Yankee Stadium, for a large and well-respected New York Stock Exchange company. We are also working on a $120 million construction loan for a 300-unit assisted living project on Long Island and a $220 million construction loan for a mixed-use retail, office and residential project in Boston. For another client we are refinancing $90 million on three shopping centers with portfolio lenders, all of which are at 75 percent loan-to-value, nonrecourse.

BW: We’ll also be closing a $100-million loan on a prime 20-story office property in Midtown South next month.

How do you find the construction lending environment right now?

BW: It’s selectively tighter than it has been. If you’re looking to finance new ground-up construction of condominiums, then things have changed. There’s a lot of new for-sale product on the market and lenders have become much more conservative given where we are in the cycle. Not to say financing is not available, but it’s more sponsor-driven than ever.

By and large, lenders have adopted a more thorough and investigative process to underwriting and closing loans since the crash. There are more layers of approval internally, more checks and balances to ensure compliance with regulations. But, that said, there is still healthy competition among lenders for deals. When you have a good deal and good sponsor you’ll drive competition. There’s still liquidity out there, but construction lending is and has always been the riskiest kind of lending there is.

RA: There’s also a distinction between the larger banks that may be under increased regulatory scrutiny, as compared to the smaller banks, which often fly under the regulatory radar and are able to offer more liberal terms. We have closed some amazing deals with several of the “not too big to fail” small and midsize banks who we have convinced to do some pretty large deals for us.

It must be crucial to know which lenders are willing to do what?

BW: It’s our job to know which lenders are the most competitive for any given property type at any given leverage level at any given time. We must make the right marriages for our clients. We have superb, multidecade lender relationships with our lenders. We were both bankers and spent many years in commercial real estate lending. Having done that, you see how it’s very important for brokers to manage relationships properly and respect people’s time. We speak to our lenders constantly in trying to get them what they want.

RA: The genesis of our assisted living deal was from our conversation with a senior executive at a life company who indicated that he needed more loan volume in New York and specifically mentioned a requirement for quality assisted living product in their portfolio. With that knowledge we approached a long-term relationship of ours who develops assisted living facilities. For him, it was like discovering America—a new lender that he never had on his radar that offers such a unique and attractive product as compared to what banks offer.

How has the industry changed since you started your careers?

BW: Back then there was no commercial mortgage-backed securitization—there’s CMBS now. Lenders, by and large, underwrite property more thoroughly, and there are many more lending sources from the local level to the national life companies.

RA: When the secondary market for CMBS is good, it is a great alternative, and we still value it as a vital form of financing. We did one of our largest loans, $169 million, with Morgan Stanley last year. In the past year CMBS lenders have had a harder time being competitive, but I think that CMBS spreads will continue to come in next year. Before the CMBS market crashed, we did 80 percent of our business with CMBS lenders as they were so aggressive and generally reliable, and it was terrific for us.

Which trends are you seeing in the industry?

BW: Family offices on the equity side are becoming pretty prominent. We have a client who has started to go down that road and raise his equity through family offices.

RA: We’ve seen more players in the mezzanine space than ever before. That is a function of the contraction in the LTVs that lenders are offering. There’s a very fertile mezzanine market because cap rates are so low and the senior lenders are sticking to conservative underwriting policies, which often require a second layer of debt, so new mezz lenders have popped up with rates between 7 and 12 percent to bridge the gap. It is, however, hard to find small mezz, less than $10 million, but there are a lot of players in the over $10 million space.

What’s next for Altman Warwick?

RA: Besides growing our debt business, we’re launching a new and exciting proprietary equity financing platform. We see a large untapped demand for equity requirements under $15 million, which is too small for most institutional equity investors. We have a novel and continuous equity source of private investors that have tax-deferred equity requirements from a few million up to $130 million. Unlike 1031 investors, the tax-deferred requirements of these investors are generated from the sale of non-real-estate businesses. These investors want to align themselves with experienced real estate operators and are willing to accept returns significantly below that of the institutional and private equity market. Also, their holding periods are far longer than those of traditional institutional equity, which is in alignment with most real estate entrepreneurs.

BW: We want to grow the company with discipline, hire more people and continue to cultivate more relationships. We’re not just about doing deals. It’s all about a fiduciary duty that we have to our clients. At all times, we have their best interests at heart, and we never forget that. So we never want to be too big where we let things slip through. We have had a very successful business model where we are so hands-on with our clients. We never want to sacrifice the service that we provide.