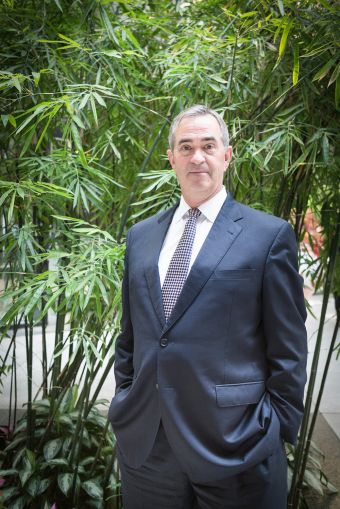 It means “the mood is very good,” said Jerome Sanzo, who is a year and a half into his role as an executive director and the head of real estate finance at Industrial and Commercial Bank of China.

“Our mood is good—we’re growing here,” he told Commercial Observer. “I’ve got a great team I work with, and I enjoy the different cultural interactions. It always makes the workplace more interesting and more fun.”

Sanzo, who worked in banking in Asia and Australia for seven and a half years during the 1980s, said he only speaks Chinese when he “wants to make the office laugh.”

At ICBC’s New York branch, located on the 20th floor of Trump Tower at 725 Fifth Avenue between East 56th and East 57th Streets, everyone tries to learn a new phrase in Chinese each week, Sanzo said. And certainly, the Chinese bank has been growing its presence in the United States, especially on the commercial real estate front.

ICBC opened its first U.S. branch in 2008; before that, it only had a loan production office. In January 2015, Sanzo was brought on to start ICBC’s commercial real estate lending platform. While the bank had dabbled in CRE lending through its subsidiaries, there was no official, organized effort to invest in the U.S. real estate market. That year—after several months of hiring team members, setting up policies and procedures, finding legal counsel, third-party appraisers and construction consultants, among the myriad of tasks that stands before someone who is setting up a real estate platform in New York City—ICBC’s CRE team originated just under $3 billion in commitments on real estate in the U.S. And the platform is on the same track for this year as well, Sanzo said. He estimates its commitments will range from $2.5 billion to $3 billion.

“Real estate is very important to ICBC—it’s obviously a significant industry in China and a significant force across the world,” he said. “I don’t think any foreign bank can truly replace the U.S. banks. We don’t have the scope of across-the-country relationships that they have, but we are here to be a significant presence.”

One of the challenges though is name recognition. When Sanzo joined less than two years ago, “Few people even knew what ICBC was,” said Mark Edelstein, the chair of the real estate finance and distressed real estate practices at law firm Morrison Foerster, who does legal work for the Chinese bank.

“If you’re a U.S.-based developer, especially for a construction loan, and you don’t know ICBC, why do you want to deal with me versus somebody else?” Sanzo said. “So we try to explain who we are and we think we’ve been very successful in getting the name out. That is the biggest challenge. And then the second biggest challenge is of course the reverse, explaining how things are done here versus how they’re done in the home country.”

Sanzo has a tremendous amount of experience when it comes to working at international banks. After graduating business school at the Thunderbird School of Global Management, which is now a division of Arizona State, he went to work at Chase Manhattan Bank’s energy group (now J.P. Morgan Chase) and was transferred to the bank’s international division, working in Asia and Australia in the 1980s.

The soft-spoken and friendly Sanzo didn’t spend too much of his time talking about the years he spent in Asia or down under. He was all business when he sat with CO at the Trump Café inside the Trump Tower, and he didn’t dwell on personal issues too much—but we learned that he grew up in the New York area and is happily married with three children. When not originating loans on real estate or managing his team, he’s out  golfing or swimming. And a former colleague of his told us that Sanzo “has a tie for every occasion.”

When in Australia, Sanzo began to work in real estate property finance and continued when he came back to the U.S. at French bank Banque Indosuez’s real estate platform. By 2000, he landed at GE Capital Markets, overseeing its commercial real estate loan sales and syndications teams. And before joining ICBC, he worked at Eurohypo and saw the real estate portfolio through to its close after it was acquired by Commerzbank.

As Sanzo was closing down the portfolio at Commerzbank, someone from ICBC reached out to him to see if he would want to set up their real estate group. “And here I am,” he said. “It’s been a lot of fun, and in a sense, I’ve closed the circle with starting my career in Asia, and here I am, at the largest bank in Asia.”

When it comes to Chinese banks playing it big in real estate, Bank of China is undoubtedly one of the first to come to mind, last year originating about roughly $5 billion in CRE debt across the country—approximately $2 billion more than ICBC did in its first year with a CRE platform.

On a global scale however, ICBC is the largest bank in the world by assets and in terms of tier 1 capital, and “dependent on currency movements,” it’s worth about $3.6 trillion, Sanzo said. The bank operates in almost 50 countries, and in June officially opened a branch in Mexico.

“Borrowers are always interested in what’s going on in China as they are with any other part of the world,” Sanzo said. “China is the number two economy in the world by [gross domestic product]. It’s natural for anybody here to be interested in what’s going on there. We are a large source of capital for good projects, and that is interesting enough.”

Big banks aren’t invincible, though. According to a July article by The Wall Street Journal, 20 of the world’s largest banks have lost a quarter of their combined value, which totals $465 billion, since the start of 2016. However, ICBC and J.P. Morgan Chase took the smallest hits, losing 11 percent and 9 percent, respectively. Other huge players like Barclays, Credit Suisse, Deutsche Bank, Royal Bank of Scotland and UniCredit lost more than 40 percent of their market values so far this year.

Sanzo said when it comes to CRE, the bank is protecting itself by taking a prudent approach.

Beyond construction, which is between 30 to 40 percent of ICBC’s lending book, the bank is primarily providing debt on office properties and some multifamily, he said, only in gateway markets and with high-quality sponsors.

“At ICBC, Jerome [has been] instrumental in them being an important market player today,” said Karen Ramos, a managing director in the loan syndication group at Crédit Agricole. “They’ve done a number of high-profile deals, and they are now recognized as good partner of a lot of the syndicated deals. They have the ability to hold large amounts and actually close [deals].”

Ramos has known Sanzo since he headed the placement and syndications group at GE in the early 2000s, and even though they have not worked together since he left for CIT Group in 2006, they have always kept in touch and she considers him a mentor.

“As a syndications person—he’s been doing this for more than 20 years—you do get to know the different nuances [of the market],” she said, emphasizing that he is very attuned to the risk appetite of banks. And because of a recommendation Ramos made, Sanzo has been an adjunct professor at New York University’s Schack Institute of Real Estate since 2007—a position he loves very much because it keeps him “young(-ish!)” and challenges him to stay current with the business, he said.

Jo Hastings, a director in the real estate structured finance group at Société Générale, shared the sentiment. “He’s one of the best people I’ve worked with,” she said. The two were colleagues at Eurohypo, and now that they’re at separate banks, she said she would relish the chance to do a deal with him now. “Sometimes SocGen’s clients don’t overlap with ICBC’s, but Jerome knows everyone and everyone knows him.” Sanzo said that nearly half of his firm’s clientele are from Asia, while the other half are purely from North America.

“What distinguishes ICBC from other banks is that they underwrite to American standards,” Edelstein said. “They structure deals like [banks] do in the U.S. and syndicate to U.S. banks.”

While the preference is for ICBC to act as the lead arranger on syndicates, Sanzo said they are happy to share the risk and work with U.S. banks.

“We compete with all of the large U.S. banks that you would normally think of, as well as any of the larger European or Asian banks,” he said. “But we also work together because there are some projects that are so large that no one bank wants to be exposed.”