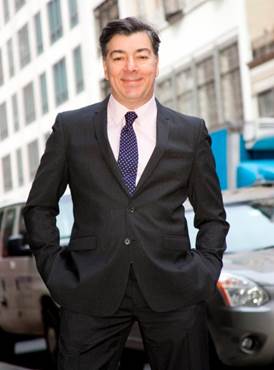 Joseph Aquino has found a new gig about four months after he was terminated from Douglas Elliman, the brokerage he sued this spring over allegations that he was stiffed out of $1 million in commissions.

Aquino, based in Manhattan, has partnered with Marc-Christian Riebe, the founder of the firm who works out of the firm’s headquarters in Zurich. Having a colleague based in Europe speeds up the process, Aquino said, because instead of him taking a trip to the continent perhaps a few times a year, his colleague can travel quickly to meet with clients looking to come stateside.

“There’s someone who can meet the people at the corporate office,” Aquino said. “Marc can go take a train to Geneva and meet the people this afternoon. A lot of these luxury brands, they’re based out of Europe. We feel we have an edge [with this arrangement].”

Aquino said he joined the firm within the last month. He is listed as a partner on the company’s website. It wasn’t immediately clear if he was planning to grow a United States-based team in the near future.

The news comes in the wake of Aquino’s departure from Douglas Elliman this spring after he took legal action against his longtime firm. Aquino sued the brokerage in March, arguing that Consolo used $1 million in commissions that was earmarked for him for her own personal expenses including make-up appointments, as The Real Deal reported at the time (Consolo was not named in the lawsuit). A day after the story broke, TRD reported that Aquino had been let go by Douglas Elliman, where he had worked since 2005.

A spokesman for the brokerage declined to comment to CO today, because “Douglas Elliman does not comment on pending litigation.” Consolo, who has also been the more outspoken partner in the duo, also declined to speak on the matter.

All Aquino would say on the the lawsuit was: “It’s all public knowledge. I have nothing to say about that.” Cindy Salvo, Aquino’s attorney, noted that the brokerage had until the end of July to file a response to the most recent court documents, which she filed in May.

Before he joined Douglas Elliman, Aquino spent 16 years at retail brokerage Garrick Aug Worldwide, according to his LinkedIn profile, where he and Consolo also worked together. Their deals this year have included representing the landlord of 1225 Madison Avenue in a 395-square-foot lease with Benefit Cosmetics, as CO reported in January.