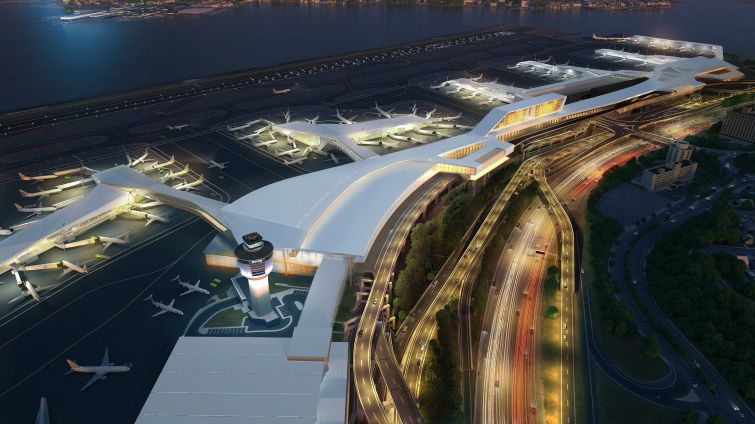 A rendering of the new LaGuardia Airport (Photo: governorandrewcuomo/flickr.com).

Commissioners of the Port Authority of New York & New Jersey voted today to earmark $600 million for its part of building the Delta Air Lines component of the new LaGuardia Airport, with the rest of the $4 billion project under negotiation.

Delta has a handshake agreement with the agency, which controls the ground at the airport, in which it will build new Terminal C and Terminal D buildings closer to the Grand Central Parkway. Patrick Foye, the Port Authority executive director, said the agency is currently working out a renewed ground lease with the airline.

The $600 million breaks down to no more than $200 million for the terminals, $185 million for a new electrical substation and up to $250 million for infrastructure work like roadways leading to the buildings, Foye said during a presentation to the board. Delta will shoulder the rest of the cost, which is expected to tally in at $3.4 billion.

Construction of the project is not expected to begin until 2017, Foye said, with the first phase finishing in 2020. The two buildings are expected to be completely done by 2024.

Port Authority officials are finalizing a deal that would amend its lease with Delta at the sight, running through 2050. Foye said that includes a rent abatement that will be offset by the agency getting a higher take of retail revenue at the terminals. Foye did not describe specifics of what those numbers might be, but said Delta was seeking a break north of $100 million and that the Port Authority was seeking something lower than that.

“Today marks another proud moment in Delta’s ongoing commitment to providing an exceptional experience for New Yorkers,” Ed Bastian, the chief executive officer of Delta, said in a press release issued by Gov. Andrew Cuomo’s office. “Our participation in this historic project builds on the more than $2 billion Delta has invested in New York over the past seven years.”

Cuomo announced a plan last year to basically build a brand new LaGuardia next to the existing facility. When the Delta component is finished, the airport terminals will be connected for the first time by a central hall linked to a new Terminal B, which is currently under construction to the west of Delta’s property. LaGuardia Gateway Partners, a consortium of six development and construction companies, entered into a 35-year ground lease to build the new Terminal B at a cost of $4.2 billion—giving the project a total cost of about $8 billion.

That pricetag hasn’t sat well with groups such as Global Gateway Alliance, a pro-development group focused on improving the city’s airports. Joseph Sitt, the chairman of the group and CEO of Thor Equities, in a statement applauded the vote, but raised issue with the final cost. He called for the Port Authority to build a website that tracks progress and finances at LaGuardia.

“Cost estimates have more than doubled in the last year, so it’s time now for partners to bring greater transparency to the overhaul and build confidence in the project by posting clear budgets and timelines to the project website, and updating it regularly so the public can keep track,” Sitt said in prepared remarks.