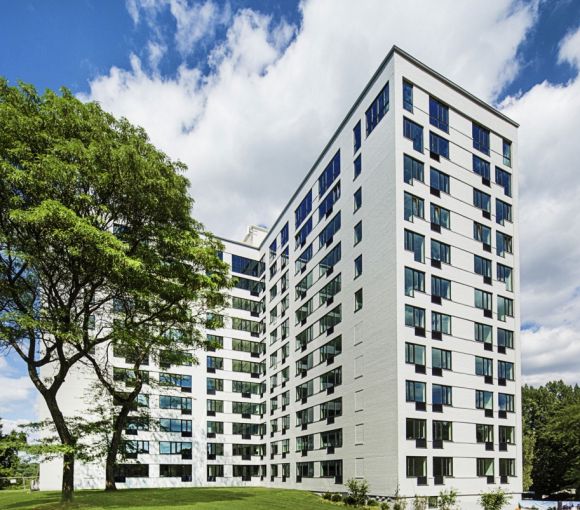 Shawn Rosenthal, of CBRE’s Midtown Manhattan office, worked on the transaction, which carries a three-year term with two one-year extension options. The mortgage is replacing a construction loan that was syndicated by Natixis Real Estate Capital, but it was not immediately clear what the amount of the previous debt was.

“The financing markets were extremely impressed with the quality of the renovations to date, the interiors of the units and the unique and expansive amenities,” Rosenthal said in prepared remarks provided to CO. “The Pestronk brothers truly created a destination Class A multifamily asset, unmatched in the Philadelphia area.”

Philadelphia-based Post Brothers, which was founded by Matthew and Michael Pestronk in 2007, has been redeveloping the four-building multifamily property at 3900 City Avenue since 2014. The remodeling has been split into two phases: The first, which has been completed, included the renovation of the 180-unit Washington Tower and 265-unit Madison Tower. The second phase is currently underway and includes redeveloping the 331-unit Jefferson Tower and the 242-unit Adams Tower. The property is expected to be fully leased in 2017.

“We were pleased to deliver this customized financing solution for the Post Brothers to fund the completion of Presidential City in Philadelphia,” Dennis Schuh, the chief origination officer at Starwood, said through a spokesman. “We believe the project is unrivaled in terms of quality and amenities in the market.”

Apartments in Presidential City range from studios to three bedrooms, and have recessed LED overhead lighting, energy-efficient, carbon-free electric heating and cooling systems and energy star appliances. There are currently 20 units available for rent at the property, with monthly rents starting at $1,325 for a studio and $4,555 for a three-bedroom, according to the Post Brothers’ website.

“The CBRE team was able to help us obtain a loan that was commensurate with the world-class environment that we’ve created in one of Philadelphia’s most significant and historical apartment communities,” Post Brothers President Matthew Pestronk said.