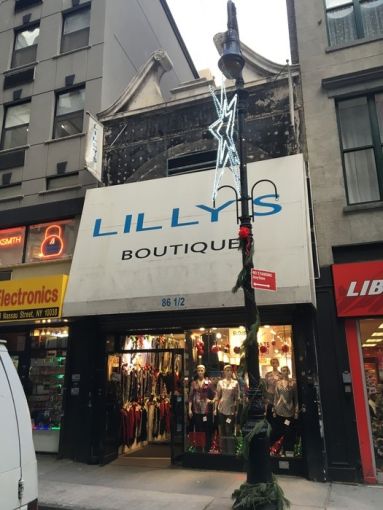 Two Boots, which has 17 locations in six states since launching in the East Village in 1987, signed a 12-year lease for the entire two-story building at 86A Nassau Street near Fulton Street, according to Winick Realty Group, which brokered the deal. The space is 2,250 square feet including the basement, split evenly between the three floors. The asking rent was $250 per square foot.

“Two Boots Pizza had been looking in Lower Manhattan for years because they recognized that this was becoming a true seven-day neighborhood and they could provide a valuable service for the growing residential community,” said Winick’s Aaron Fishbein in prepared remarks. He represented Two Boots Pizza and Veltri Properties, the landlord, along with colleague, Jeremy Wintner.

Clothing store Lilly’s Boutique previously occupied the ground floor. The second floor, with a hidden deco ceiling, was abandoned for more than 20 years, Winick said in a release. Construction has already commenced on the property.

“We’re incredibly excited about both the building and the neighborhood,” said Two Boots Pizza owner Phil Hartman via a Winick spokeswoman, “and we look forward to bringing our unique Cajun-Italian pizza and funky folk art deep into the heart of the Financial District.”

Two Boots Pizza’s plans call for a pizzeria on the ground floor and a “cozy bar/lounge” on the second floor, and there is the potential for rooftop seating, Winick said in the release. The basement will be used for prep and storage. The new eatery is slated to open in the last quarter of the year.

Veltri Properties bought the property in March 2003 for $1.2 million, according to CoStar Group.