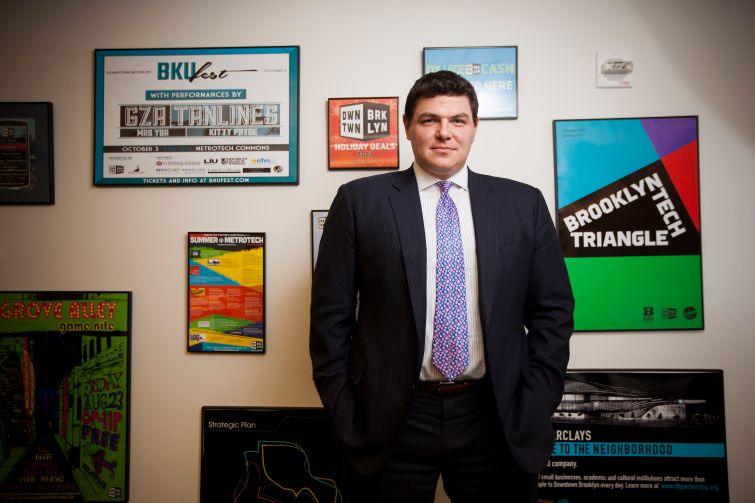 Tucker Reed, the president of the Downtown Brooklyn Partnership, will step down from his role leading the business improvement district after more than four years, Commercial Observer has learned.

“Over the past four and a half years Tucker has been a stalwart champion of Downtown Brooklyn and has presided over a period of great prosperity and economic expansion for our community,” Gilmartin wrote in the email, which was obtained by CO. “As the greater Downtown Brooklyn area ushered in an era of unprecedented new development, Tucker led our business community with bold, smart and savvy programming and spearheaded groundbreaking policy initiatives that will serve our community and our city for decades to come.”

Since taking over the organization in 2012, Reed has introduced a slew of policies to spur both residential and commercial development in Brooklyn. Among those is pushing for the Brooklyn Tech Triangle, a partnership with the Brooklyn Navy Yard and the Dumbo BID, to reduce office vacancy in the area. Downtown Brooklyn’s office vacancy has been reduced to 1.5 percent from 10 percent in the last four years, according to a memo attached to the email listing Reed’s accomplishments.

That’s not to say Reed hasn’t pushed for more office development in the area, which is between the Fort Greene and Brooklyn Heights sections of the borough. In a February 2014 interview with CO, Reed noted that more companies wanted to set up shop in Downtown Brooklyn, which had long been the offices for behind-the-scenes operations.

“Whereas before we were a back-office home to the finance, insurance and real estate industries and government, now you’re finding a lot of firms that want to set up their front-office location here,” Reed said.

In an August 2015 market report issued by the Downtown Brooklyn Partnership, Reed stressed the need for more office development in the area, which has seen a heavy amount of residential building in recent years. Indeed, development is on its way to Downtown Brooklyn as Tishman Speyer is building 10 floors of commercial space above the neighborhood’s Macy’s at 422 Fulton Street. Quinlan Development is creating 230,000 square feet at 41 Flatbush Avenue between Fulton Street and Lafayette Avenue.

Before joining the Downtown Brooklyn Partnership in 2012, Reed spent three years as the director of special projects for Dumbo-based Two Trees Management Company. Reed also did a one-year stint from 2008 to 2009 as chief of staff for the Baghdad Provisional Reconstruction Team in Iraq.

Gilmartin indicated that Reed did not have immediate plans for where he is going, but has been mulling heading into the real estate industry or the entrepreneurial realm.

“As the ever-selfless and responsible leader, rather than test the waters on our time, Tucker has decided to take some time off to weigh options and gain inner clarity on his next move,” Gilmartin said. “Given all he has done for the organization, we plan to offer our unqualified support in honoring this request.”

A spokesman for the Downtown Brooklyn Partnership declined to comment.