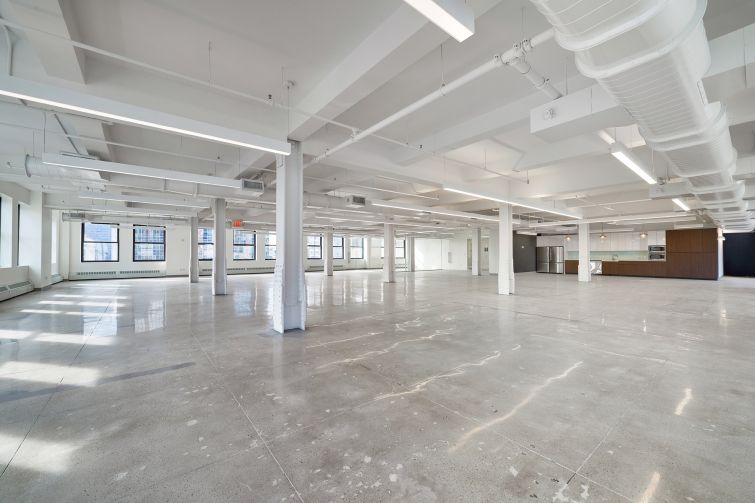 The space on the 21st floor of 24-story commercial office building 180 Madison Avenue was, according to Daniel Montroy, a principal at the architectural firm Montroy Andersen DeMarco (MADGI), “an old, tired office.”

That is why property manager CBRE hired his firm to redo the floor of the building (owned by Prudential Real Estate Investors, as Commercial Observer previously reported) top to bottom, turning it into a modern, open, well-lit space with scintillating skyline views, ideal for TAMI, or technology, advertising, media and information, tenants.

“It was 30 years old or more, just a very old, tired office,” Montroy said. “It had acoustic tile ceilings, [which were] low. It had dark fluorescent lights, and it was all chopped up into dark, small, maze-like spaces.”

As such, the space was the opposite of the sort that attracts big-money office tenants today, who desire openness and light in our collaborative work culture.

MADGI has done other pre-built office spaces in the building—this is its eighth—but with divided floors. Given the 21st floor’s smaller footprint, CBRE thought this space would be ideal for the building’s first full-floor pre-built.

“We have had a great deal of success with divided floor pre-builts in the base of the building,” CBRE’s Evan Haskell, who will handle the leasing, said in prepared remarks via a company spokesman.

“Given that this is a smaller floor plate in the tower, we viewed it as a perfect opportunity to deliver to a slightly larger tenant with a full-floor presence. It is the quality of installation that we have been providing for the divided floor units lower in the building.”

The 10,515-square-foot space, which cost $730,000 and took about six months to renovate, has many of the elements most desired by TAMI tenants seeking more social work spaces. In addition to exposing the building’s duct work and installing a polished concrete floor, the open-plan design comes with an intrinsically social aura.

“Tenants always want a great social space,” Montroy said, “so we did a big, beautiful pantry that’s really a center of the office. I wanted to do a pantry that’s nicer than a lot of people would have in their apartments so that they really feel good about where they work.”

Montroy also, in a first for the building, exposed its structural steel columns, creating a sleek look while opening up more space as well.

“We brought all the columns back to the structural steel and used intumescent paint to fireproof the columns, which provided a great architectural feature,” Haskell said.

Montroy noted that one of the keys to the success of the buildout was that the architecture team built out less than usual to leave incoming tenants with a palate of options for designing the space as they see fit.

“It seems to be very attractive,” Montroy said of the less expansive buildout. “It’s more open than the average tech loft.”

Montroy believes that this openness, and the ability for firms to take immediate occupancy upon leasing, make it an attractive proposition for TAMI firms in every sense of the word.

“I think that was an important part of this, having it be more open and building less, because it gives the tenants more possibilities when they come in. They can really see it as theirs.”