Suicide and Mental Health Issues—Unspoken Topics in the Construction Biz 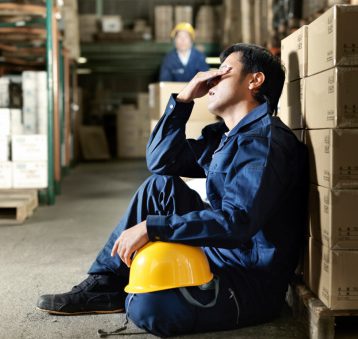 Last year, an ironworker named Gary Russo, dubbed the “Second Avenue Sinatra” by the tabloids for singing karaoke during his lunch breaks while working on the Second Avenue subway line, took his own life.

If you saw him perform or read about him five years ago, this news might have come as a shock; one can still find clips of Russo sweetly crooning “Summer Wind” on YouTube to passersby on the Upper East Side. But after he hung himself last August, it became clear that Russo had been growing ever more depressed over life circumstances, including a breakup.

This March, an electrician jumped from the 53rd floor of a Los Angeles construction site. Joseph Sabbatic, who worked two days on the job, had reportedly been depressed and was looking for a stable career when he died.

Joseph Patti, the vice president and chief financial officer of Welsbach Electric Corp. in College Point, N.Y., recalls someone he knew who was facing a layoff in six months’ time and fell off the bridge of a site near the Washington Bridge while doing a steel inspection. “My suspicion was it was a suicide,” Patti said. “He had family issues.” Then there was a construction worker in a bad way that Patti thought was contemplating killing himself, to whom he gave a suicide-prevention book that helped the worker get on a more positive track.

Such incidents are not wholly uncommon in an industry known for a workforce dominated by men who are not college educated, work on a project-by-project basis, suffer long hours during all weather conditions and inhabit a culture that seldom acknowledges vulnerabilities and has a high tolerance for alcoholism.

According to data from the Centers for Disease Control and Prevention ranks suicide ranks as the fourth leading cause of death for males ages 25 to 54 in 2014—the age bracket, which comprises the majority of the construction workforce in the United States.

The construction industry is “inherently more dangerous, and I think that puts more pressure [on employees],” said Louis Coletti, the president and chief executive officer of the Building Trades Employers’ Association of New York City. And the world of construction has become more demanding. “I’ve been in the business for 30 years,” he added. “I’ve never seen this pressure since the recession. Cost was always an issue. But all of a sudden, cost has become the only issue.” And with cost, issues like mental health fall by the wayside.

One owner of a Manhattan multigenerational construction company who declined to be cited by name said, while he has not had any workers kill themselves, he knows the guys contend with mental health issues.

“Alcoholism and depression, I think, are a part of the culture of construction,” the company head said. “When people are unhappy, they seek out alcoholism. If that doesn’t work, they will consider other things.”

There is a correlation between addiction and depression and suicide.

“Depression and addiction are significant contributors to suicide risk,” said Sally Spencer-Thomas, the CEO and co-founder of the Carson J Spencer Foundation, a Denver-based organization leading innovation in suicide prevention.

And beyond emotional issues, construction workers battle chronic pain and health problems, said Jill Harkavy-Friedman, the vice president of research for the American Foundation for Suicide Prevention, which can impact mental health.

Lendlease, one of the world’s leading project management and construction companies, has been investing resources in the mental health space since 2008. But the issue of suicide became more heightened in 2014 when a Lendlease worker fell from a construction site at Barangaroo in central Sydney, Australia. Since then, there have been no fatalities on any other Lendlease site, according to Sonia Higgins, the Australia-based global general manager of group sustainability at Lendlease, who oversees the company’s health and wellness efforts. (But that doesn’t include deaths off-site that are not classified as suicide but could be—like drug overdoses or one-person car crashes.)

Among the 1,700 U.S. Lendlease employees, 340 construction workers were surveyed in 2015 to determine the behavioral, environmental and physical health status of the organization. Based on self-reporting, there was a 5 percent prevalence of stress, anxiety and depression among the workers (which didn’t just include those in construction) and 36.5 percent of the workers claimed to be abusing substances.

Suicide and mental health issues in general are not unique to Lendlease, but the company appears to be the only major construction firm in New York City speaking openly about the topic.

“It’s kind of a weird little secret that we don’t like to talk about,” said the Manhattan construction company proprietor who declined to be named, in large part because of the mores and sensibilities of the construction worker.

Lendlease makes mental well-being a priority by using a suicide prevention guide, “A Construction Industry Blueprint: Suicide Prevention in the Workplace” (created by the Carson J Spencer Foundation, in partnership with RK Mechanical and the National Action Alliance for Suicide Prevention), training nearly 200 senior employees to become mental health first aid officers, incorporating a well-being conversation into the performance-review process, giving employees and their families access to an employee assistance program and adding “well-being leave” to paid time off. The company created an online “Mental Health in the Workplace” guidebook for employees.

The company is also looking to establish  a construction consortium in the U.S., like MATES in Construction in Australia, a charity established to reduce the high level of suicide among Australian construction workers, along with Spencer-Thomas. Part of the impetus is the dearth of comprehensive suicide data among U.S. construction workers, Higgins told Commercial Observer last week at the company’s New York City offices at 200 Park Avenue.

Coletti hailed Lendlease as a vanguard in the construction industry.

“If there are any other construction companies that are providing that type of service for their management employees, I haven’t heard about it,” he said.

“We recognized that the construction industry is in the top 10 industries prone to suicide,” said Heather Gallien, the director of marketing and communications at RK. “Since we are in the construction industry and employ over 600 skilled trade workers, which are predominantly blue collar men, it’s important to us. Their mental health is important.”

The issue hit close to home in 2011 when one RK employee started giving away all of his tools to co-workers before killing himself.

“He was exhibiting some signs that he was mentally distressed on the job,” Gallien said. “His supervisor wasn’t ready to recognize that and deal with that back then.”

In the last few years, since implementing good mental health practices, RK has been able to help intervene in the case of four workers who were considered suicidal, Gallien said. In those cases, either the supervisors talked to the workers or the workers booked time with the company’s full-time wellness coach.

It shouldn’t be a surprise that this conversation is starting to emerge in the construction industry in the country; suicide in the U.S. has reached a nearly 30-year high, according to the National Center for Health Statistics. The CDC’s fatal injury database indicates there were 42,773 suicides in 2014 in the U.S., up from 41,149 such deaths a year prior.

However, to see how suicide impacts the U.S. construction industry, specifically, requires cobbling together dated data and research from outside of the country.

Men are four times more likely to kill themselves than women, and white working-age men have the highest rates of suicide, according to the Blueprint, which also noted that people in occupations requiring only a high school degree are more at risk for suicide. The construction industry is one of the top nine occupations at highest risk for suicide, according to 2009 Bureau of Labor Statics figures. In 2011, Business Insider found that supervisors of heavy construction equipment are 1.5 times more likely to commit suicide than people in other professions. The publication used data from National Institute for Occupational Safety and Health covering death certificates from 1984 to 1998.

Finally, according to the Blueprint, “people who have access to, and familiarity with, lethal means like firearms, pills and high places, are often less afraid and more capable of self-inflicted harm by these means.”

“Given the demographics of who is working in most of the construction industry, it is not surprising that the industry would have elevated rates,” Spencer-Thomas noted.

“The real problem is that the people who are at risk may not even know they are at risk until it is too late,” he said. “I’m sure my friend that I worked with that I gave the book to had no idea he was at risk until he was going to be unemployed. The person that fell off the bridge had no idea he was at risk until he found out he was being laid off and saw no way out. This is such a delicate topic that the only thing you can really do is to show the people that they have someplace to go when they feel like there is no place else.”

And that is part of what Lendlease has been working to do with its people. In time the company hopes to extend its efforts to its supply chain.