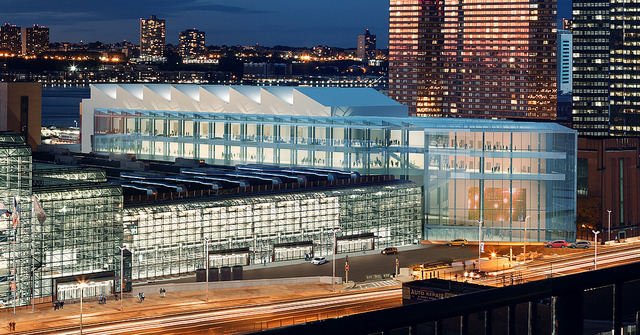 A rendering of the proposed expansions to the Jacob K. Javits Center (Photo: Gov. Andrew Cuomo's office via Flickr). tcullen2015

Three design-build teams have made the short list to complete the $1 billion expansion of the Jacob K. Javits Convention Center on Manhattan’s Far West Side, Gov. Andrew Cuomo announced today.

Gilbane Building Company; a joint venture between Lendlease and Turner Construction; and well as Skanska USA and two architecture firms are now eligible to respond to the requests for proposal issued by the state. These teams responded to the initial request for qualifications in May.

Although Cuomo initially planned to break ground on the project by the end of 2016, today’s release indicates the developer will not be selected until early 2017. The three bidders have until until Oct. 31 to submit plans for the 1.2-million-square-foot expansion.

“Skanska USA is excited to be a finalist for yet another transformational infrastructure project supported by Gov. Cuomo,” Tom Webb, the executive vice president and general manager of Skanska USA, told Commercial Observer in an emailed statement. “The proposed expansion will bring the facility into the 21st century with more space for meetings and exhibitions and ensure New York remains a bustling hub of commerce.”

The company’s joint venture, dubbed Skanska Javits Design-Build, includes architecture partners HOK and STV, a Skanska spokeswoman confirmed. A spokesman for Lendlease declined to comment while Gilbane did not immediately comment via a spokesman.

The Empire State Development Corporation, a state-run entity that controls the 2.1-million-square-foot center, will foot the expansion bill, as CO previously reported. Cuomo announced the expansion plan in January 2016, as part of a bigger infrastructure push that includes an overhaul of Pennsylvania Station, adding a track to the Long Island Railroad, a new train tunnel under the Hudson River and Wi-Fi in subway stations.

“Clearly the RFQ process was a success, with three strong teams selected to compete for the right to design and build a major expansion to one of New York’s most iconic and exciting event spaces,” Howard Zemsky, the president of Empire State Development, said in prepared remarks.

Cuomo’s design-build strategy intends to save money and accelerate the process by combining design and construction in a single contract.

“We plan on maintaining our normally packed schedule through construction and filling the new space as soon as it opens,” Alan Steel, the president and chief executive officer of the New York Convention Center Operating Corporation, which operates the Javits Center, said in the governor’s press release. “We will be able to attract a new generation of customers to the Empire State, leading to the creation of new jobs and new business opportunities for New Yorkers.”

New construction at the center will bring more amenities, new state-of-the-art meeting rooms and ballroom spaces, 27 loading docks, a rooftop terrace and a pavilion that can accommodate around 1,500 people, according to the governor’s office.

“The Javits Center is one of New York’s greatest economic assets, and this project will help to ensure it remains a source of jobs and economic activity for years to come,” Cuomo said in prepared remarks. “This is an important milestone in our plan to transform Javits into a 21st century venue for the next generation and I look forward to seeing this project get off the ground.”