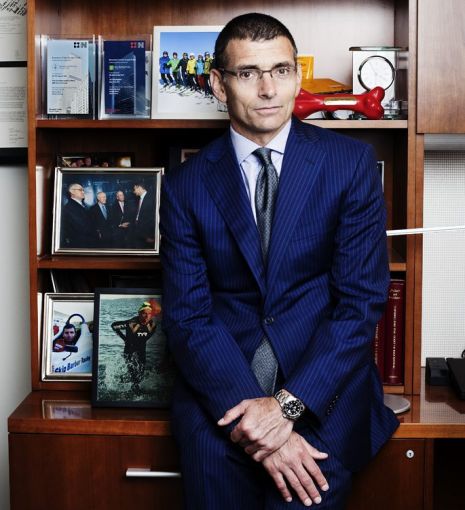 Real estate is a hard business—but it’s not, exactly, like splitting the atom.

Unless, of course, it’s finding a vacancy for a tenant that splits atoms. That’s actually pretty hard.

From 2010 until last July, Mark Weiss (formerly of Newmark Grubb Knight Frank, currently of Cushman & Wakefield) negotiated on 20 different sites throughout the city to build a proton beam therapy center that will treat children with brain tumors. The consortium of hospitals he was representing wasn’t looking for just a specific size or close proximity to the subway like most developers. In this case, the group of hospitals looking to build the center needed a certain geometry, be vibration free and away from any structures or technology that could disrupt the equipment, because this will be a ground-up facility where the atom will be split.

Weiss, with more than 30 years of experience in the real estate business, described it as the hardest and most grueling deal he’s ever worked on. Eventually, the consortium—Memorial Sloan Kettering Cancer Center, Montefiore Medical Center, Mount Sinai Hospital and ProHEALTH—closed on the 51,000-square-foot plot at 225 East 126th Street between Second and Third Avenues for $14 million last July.

“When we closed, there were 40 people in the room, and we were all speechless and drained,” Weiss recalled. “It had more challenges than anything I had ever seen.”

That wasn’t his most touted deal of 2015, by the way. Earlier this year, Weiss took home his third Real Estate Board of New York Ingenious Deal of the Year award in 10 years. The $226 million land acquisition of an Upper East Side site, which closed in April 2015, will eventually lead to a new outpatient facility for MSKCC and a new nursing school for Hunter College.

Surely, 2015 was a whirlwind for Weiss, who left NGKF this January after almost 14 years with the brokerage to become an executive vice chairman at C&W. He ranked as one of the top 10 moneymakers at the firm, as CO reported in November 2014. After making a name for himself representing nonprofits, law firms and life science companies, the Upper East Side resident is now looking to reshape himself as the go-to real estate guy for the financial sector.

“I was acutely aware that I had one last chance to reinvent myself professionally,” Weiss, 53, told CO. “It was agonizing, because I cared about Newmark. They’re good people. I did very well there. But I felt, on the whole, my chances of reinventing myself and accomplishing the sort of things I hope to accomplish are better here than they would be there.”

The proton beam therapy center will be particularly impactful because it will be the first of its kind in New York State. Pennsylvania, California and Florida all have facilities of this type. But parents bringing their children to MSKCC or Montefiore with a brain tumor had to leave New York for treatment.

Naturally, the community was worried about a facility where an atom would be split a few blocks away from homes in El Barrio/East Harlem. The deal never would have gone through without the support of City Council Speaker Melissa Mark-Viverito, who represents the area, Weiss said.

“The New York Proton Center will offer an important health care option for New Yorkers, while providing local jobs to the El Barrio/East Harlem community,” Mark-Viverito said in a statement via a spokeswoman. “The health care institutions and the developer have put forward a strategy to train and hire locally for a range of positions, and we look forward to working with them in the months and years to come to realize their commitment to local hiring.”

The Upper East Side deal that Weiss and his former NGKF colleagues won the REBNY award for was no picnic, either. MSKCC and Hunter formed a partnership to buy the land, which is bound by the FDR Drive between East 73rd and East 74th Streets, from the City of New York. The New York City Department of Sanitation formerly used the plot and required a replacement site as part of the sale agreement with the city, as CO reported in April 2015. Hunter agreed to give up the patch of land formerly home to its school on East 25th Street near the FDR Drive.

“Pulling everything together quickly and decisively was the most challenging task of my career,” he said. “It brought out all of the skills that I developed over the previous 30 years.”

Michael Gutnick, the chief financial officer of MSKCC, has known Weiss for more than 10 years and described him as “actually much more than a broker, he’s a business partner.” (MSKCC still uses NGKF as its broker.)

Gutnick added, “It was an extraordinary deal. It allows both Memorial Sloan Kettering and Hunter College to expand dramatically. He spends the time and effort and only brings you to deals that make sense for you.”

Weiss’ introduction to hospitals and life science companies was an extremely meaningful, but fraught one: In 2002, his wife was diagnosed with cancer and by 2003 she was undergoing treatment at MSKCC. Weiss credited the hospital for saving his wife’s life, and he wanted to give something back. (She is alive and healthy today, and they have three sons ages 22, 16 and 8.)

Gutnick didn’t even know at the time that Weiss’ wife had been ill. It was only years later—after Weiss wrote a book When Your Wife Has Breast Cancer…: A Story of Love, Courage and Survival in 2006 about the experience and appeared on the Today show—did he realize how personally Weiss took his connection to the hospital.

Weiss began working with the hospital on several deals starting with a 2,000-square-foot mammography center in Harlem that was being funded by Ralph Lauren. That snowballed into cultivating more life science clients.

Now that he’s at C&W, however, his goal is to work with companies in the financial sector.

“While people in the past had focused intensely on them, they’ve fallen out of favor because of the climate of regulation,” he said. “But I have 100 percent certainty that they’ll figure out how to reinvent themselves and the time to engage that sector is when they’re down, not when they’re up.”

Finance and insurance employment in New York City increased by 7,000 jobs in 2015, the second straight year the industry saw job growth, according to the New York State Department of Labor. But Weiss said the bottoming out still hasn’t happened because regulations from the Dodd-Frank Wall Street Reform and Consumer Protection Act have not been fully implemented. Financial firms, which had long been a tenant many brokers wanted as clients, would still see their worst hour, Weiss said. Thus, they will begin to reconsider how their real estate is going to be best used. Gunning for an industry that might not be in the best shape, or that interesting to the competition, is the same tactic he took with health care companies, he said.

Lo Russo described Weiss as having an energy that’s infectious to the people around him. The veteran broker also has a determination to constantly better himself. His work ethic—not to mention his experience working with such big-name clients—was one of the things that landed him on C&W’s radar, Lo Russo said.

“He’s the kind of person that wants to do and be better than the day before,” he said.

Weiss hasn’t always had the best luck getting hired by this particular company: The latest was his third try. He said he applied for a job there more than 30 years ago, when he was just starting out. Another stab a few years after that was also unsuccessful. But between then and now, he did stints at a few places and touts the mentors he learned from: Edward J. Minskoff, a former principal of Olympia & York, where Weiss worked in the mid-1980s; Edward S. Gordon, the late founder of his namesake brokerage; Julien Studley, the late founder of what is today Savills Studley; and Barry Gosin, the chief executive officer of NGKF. (Gosin declined to comment for this story.)

He’s also gone on to win REBNY’s Deal of the Year award twice before as a tenant representative; Weiss took the prize home in 2005 for law firm Ropes & Gray’s 251,000-square-foot lease at 1211 Avenue of the Americas, and five years later won the second-place award for 32BJ SEIU’s 247,000-square-foot lease with the option to buy at 620 Avenue of the Americas. According to C&W, he’s the only broker in recent history to also win New Jersey’s equivalent to the REBNY award (NAIOP New Jersey’s Deal of the Year) for a $37 million land acquisition to build an MSKCC outpatient center and the Long Island version (The Association for a Better Long Island) for a sale and leaseback for Publishers Clearing House—all in a single year, 2015.

Mary Ann Tighe, the CEO of CBRE’s New York tri-state region, would have lunch with Weiss when the two took a broker course together in the early 1980s. She described him as smart and energetic even back then. She said he’s one of the brokers she looks forward to working with on opposite sides of a deal. While many real estate representatives are quick to take every direction from their client, Weiss is the rare breed who isn’t shy about offering an opinion when something about a deal isn’t right.

“When you hit the ball back and forth with Mark, the ball has spin on it,” she said. “If I’m representing a landlord and I see him coming, I’m like, ‘Hurray, now we’re going to do something interesting and important.’ ”

Weiss, too, said it’s not his nature to be “an order taker” from clients. Instead, he would  rather focus on learning about every part of the client’s business and what might be best for the company (he claims to know a section of the state health code “clean”). He said the pay off isn’t so much the commission check (not that that doesn’t matter) but the acknowledgement from his clients that he’s one of them—referencing the executive in a company who called him a strategic partner.

“If you ask any of the successful brokers around town, that’s the real driver,” he said. “The money is the money. Everyone makes plenty of money. It’s that feeling, when you were a kid and you hit a home run in the little league game and the coach came and patted you on the back. It’s that pat on the back you remember.”