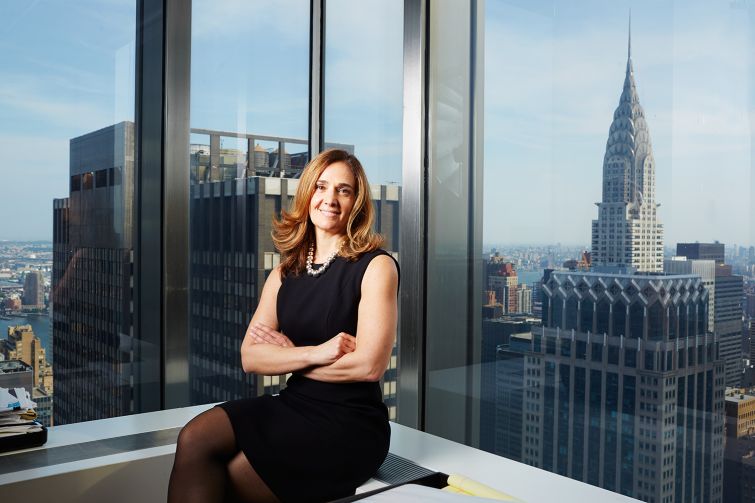 Bigger isn’t always better—and that is something that the folks on J.P. Morgan Chase’s commercial mortgage lending team can certainly attest to.

J.P. Morgan Chase’s CML group has an average loan size of roughly $5 million. These loans may not be the largest on Chase’s balance sheet, but executives at the bank see distinct opportunity at this level of commercial real estate lending. From first-quarter 2015 to first-quarter 2016, Chase’s commercial term lending portfolio—which focuses on smaller real estate loans nationwide and includes CML—saw  a 15 percent increase to $64.3 billion from $55.8 billion. The numbers show a growing effort from the international bank to increase its commercial real estate presence and outpace rivals—including Bank of America, Wells Fargo and Citigroup.

At the forefront of the effort, and overseeing lending in one of the country’s largest markets—New York City—is Judy Guarino, the northeast regional manager of CML at Chase.

Guarino has been in the banking business since the age of 17, when she landed her first job coding the account numbers and dollar amounts on checks for Bank of New York. Guarino, now 48, who grew up in the Flatbush section of Brooklyn, worked her way up the ladder, eventually becoming an assistant manager, overseeing 46 Bank of New York branches in New Jersey. In 1996, she was recruited into the business banking division of Fleet Bank, and nine years later joined the commercial term lending team at Washington Mutual, which Chase acquired in 2008.

“These were opportunities that were brought my way and I took advantage of every single one of them,” Guarino told Commercial Observer from Chase’s 270 Park Avenue office between East 47th and East 48th Streets. “I always look at it as, what’s the worst thing that could happen? Right? You can always go back to what you were doing if it’s just not the right fit for you, and I have been fortunate enough that every move I have made so far has been the right fit for me.”

Now, the opportunity that Guarino and the CML team is seizing is the demand for loans in that $1 million to $25 million range.

“It’s one of those things where you’re never going to win a popularity contest at happy hour talking about the $1.5 million retail center [loan] to a guy who has owned it since the 1960s,” said Troy Applegate, the national head of CML at Chase. “But that’s what we do. We fly underneath the radar screen, just trying to attract those customers with a very transparent, easy process.

“When you get up to that $25 million to $50 million range, it becomes a commodity and a beauty contest,” he added. “Everyone wants to get those deals done, and there is less competition in those smaller loans. We found that the credit quality is just as good if you keep your leverage at a moderate rate, and it’s been working for us nationwide.”

Guarino said that deals—which range from three-year to 15-year financings—are typically closed within 50 days, and that being a portfolio lender and a low-cost provider gives Chase a competitive edge.

“The loan underwriting, approval and closing were streamlined as we worked with the same team throughout the loan process,” said Paul Talbot, a senior managing director at Newmark Grubb Knight Frank Capital Markets. Talbot has worked with Guarino and her team doing deals for Eric Gural, the third-generation leader of Newmark Holdings.

“We did multiple deals last year totaling $100 million and the rates and terms were excellent and further enhanced by the ‘hands on’ approach that Judy and her team exhibited,” Talbot added.

The strategy is not new, though. Chase’s commercial term lending business uses the same approach, which has been especially successful in multifamily space, which is overseen by Chad Tredway, the managing director and head of CTL East.

“What we really want to do, and what we strive for, is to emulate the great business we built in multifamily, to use that same platform,” explained Guarino. “We have the same process. It’s a great business. We’re just looking to leverage that and grow the CML business.”

Guarino said that the retail space in particular is a growing driver of the CML business for her and her six client managers, especially in New York.

“You hear more about how in multifamily the units are getting smaller. Well, they’re getting smaller because people aren’t home,” she said. “They’re out. New York provides areas for folks to get together and socialize.”

One of the larger deals Guarino recently closed was a $37 million portfolio of primarily retail buildings around Madison Square Park. Tenants primarily included small health care providers, beauty salons, yoga studios and stationary cycling gyms. Most spaces didn’t exceed 3,000 square feet. (Guarino also noted that this diversification is a plus, because if one tenant leaves, there are still plenty more to pay rent, and the spaces don’t require much improvement work, so a new tenant can quickly fill the space.)

In CML’s realm of work, refinancings have comprised a majority of originations.

“You have properties that were built in the 1930s, with owners who have owned them since the 1970s or built them in the 1970s and the 1980s and still own today,” Guarino said. “Those are the assets I finance, so I don’t really see a lot of acquisition because it’s portfolios of properties held with second or third generation [owners]. I see a lot of cases where the investors grandfather bought the property.”

That said, Guarino’s team is made up of New York Natives, or honorary New Yorkers at the least. (Although, Guarino left Brooklyn at the age of 12 and now lives on Long Island with her six-year-old son.) Her client managers have been lending on real estate anywhere from 15 years to more than 30 years. Their familiarity with the New York market “is very important when you’re working with real estate investors who are multigenerational, who have also been raised in the streets and also now want to grow their business,” she noted. “It’s important that we know the market as well as they know the market, although we learn from them every day, too.”

Guarino’s team is just one fragment of Chase’s overall growth in commercial real estate holdings since the last recession.

“Part of [J.P. Morgan Chase’s Chairman, President and Chief Executive Officer] Jamie Dimon’s strategy is that he likes to have a broad-based bank,” said Roger Arnold, the chief economist at money management firm ALM Advisors and a columnist for TheStreet.

Competitors like Wells Fargo and Bank of America don’t necessarily do the same he said, explaining that while Wells has been attempting to diversify its business, it still has a high concentration of residential mortgages. Chase, on the other hand, has always tried to diversify and in the last three years has aggressively moved into the residential market, increasing that portfolio by 100 percent, Arnold said.

Additionally, Arnold pointed to recent comments from Dimon, where he expressed that auto loans, which account for roughly $6 billion of Chase’s business (double that of CRE) in particular, are facing some headwinds.

“That’s an important component of this,” Arnold said. “[Dimon] is indicating to us that he is likely going to be starting to shift the bank’s business more toward the commercial space.