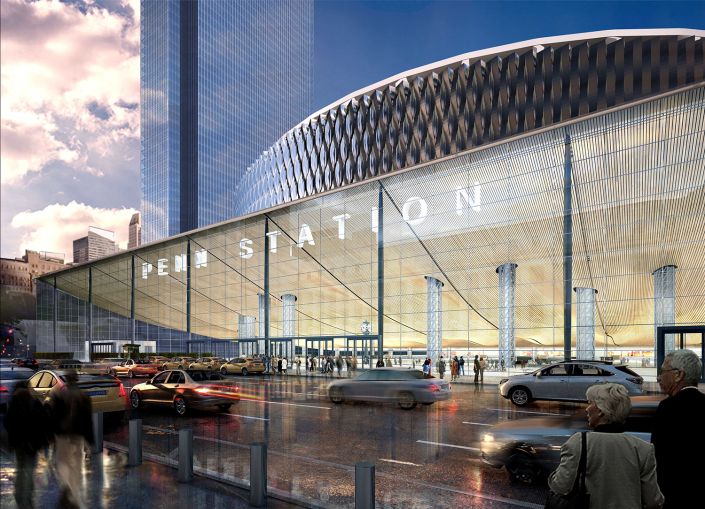 A rendering of the new entrance to Penn Station (Photo: Governer Cuomo's Office/Flickr).

Steven Roth, the chief executive officer of Vornado, said the company partnered with Related and construction giant Skanska in its bid to develop the post office, while it submitted a solo bid to overhaul Penn Station. This is the second swing Vornado and Related are taking at developing the post office in the last 10 years.

“We were the early mover in Penn Plaza,” Mr. Roth said on a call with shareholders and analysts. “We have accumulated 9 million square feet here on Manhattan’s new West Side.”

Gov. Andrew Cuomo in January announced a $3 billion plan to overhaul the existing Penn Station and convert the post office into an extension for Amtrak trains. The public-private partnership gave developers the potential to redevelop either the whole complex, Penn Station or Moynihan Station (as the post office would be renamed after the late Sen. Daniel Patrick Moynihan). Because it’s a public-private partnership, the eventual developer or developers would foot most of the bill in exchange for property management rights over a set period of time.

Suitors had until April 22 to respond to a request for proposal with Empire State Development, which handles real estate transactions for state government. Other interested parties that have toured the station include Boston Properties, Tishman Speyer and Silverstein Properties, as Crain’s New York Business reported last month.

A spokesman for ESD declined to confirm who has submitted bids. A Vornado representative didn’t immediately comment further via a spokesman.

While executives for the company have publicly supported Mr. Cuomo’s announcement in past earnings calls, this is one of the first confirmations that a major developer is seriously considering doing the overhaul. The REIT is already the largest landlord in the surrounding Penn Plaza area and would increase its square footage if it won the bid. Vornado over the last year has rolled out plans to upgrade its holdings in the area, including new public plazas as well as integrating One Penn Plaza and Two Penn Plaza into a 4.2-million-square-foot complex.

Mr. Cuomo’s Empire Station Complex plans also nullify Vornado’s pre-existing rights to redevelop the post office into Moynihan Station. Vornado and Related were named the co-developers of the post office in 2005 to turn the more than 100-year-old building into a mixed-use facility. Original plans called for a 300,000-square-foot transit hub, along with 850,000 square feet of commercial space, according to a July 2005 Vornado press release. A Related spokeswoman did not immediately comment.

Update: This story was edited to include information on Related and Skanska’s involvement in the project.