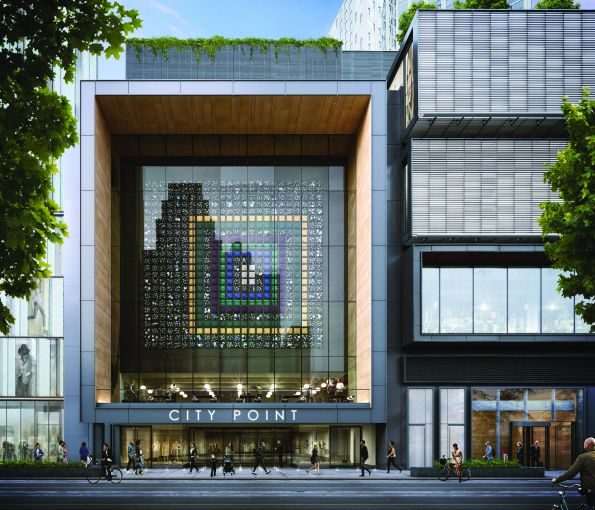 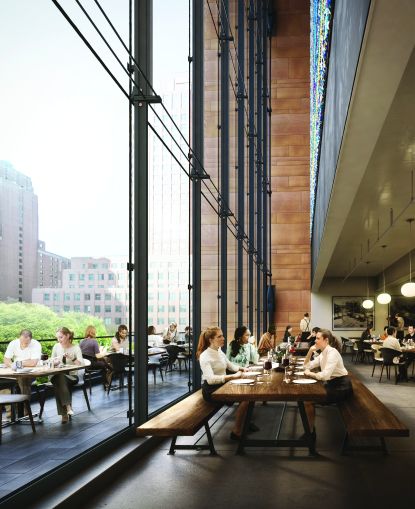 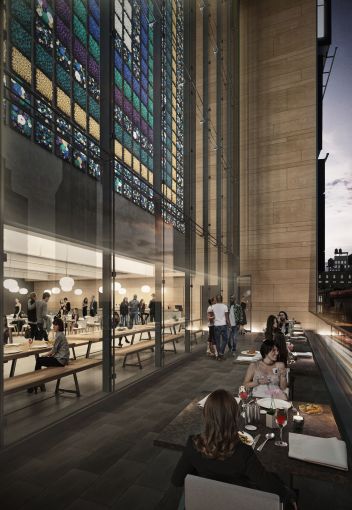 The restaurant will have a 150-square-foot terrace so tenants can dine al-fresco (Rendering: COOKFOX Architects). Liam La Guerre

Wanted: High-end restaurateur to take a spanking new space at one of the biggest and most chattered about 1-million-plus-square-foot complexes under construction.

No, not Hudson Yards (Thomas Keller and José Andrés have signed up there)—we’re talking Brooklyn.

City Point will be bringing a lot of new retail to Kings County when it opens later this year—about 700,000 square feet of it. There’ll be Target, Century 21, Trader Joe’s, the borough’s first Alamo Drafthouse Cinema and a food hall with a variety of purveyors. Add a high-class restaurant to that list.

On the mezzanine level of the 1.8-million-square-foot retail, housing and office complex, which was designed by COOKFOX Architects, developers Acadia Realty Trust and Washington Square Partners have sectioned off a 7,700-square-foot space for a luxury eatery, and they’re currently on the prowl for a world-renowned chef who will turn the venue into Brooklyn’s signature destination for special occasions.

“Downtown Brooklyn has matured. We have hotels, there are 12,000 residential units, there are all of these tech firms coming in, there is a tremendous growth in schools, so we really think the market is ready for this kind of restaurant,” Paul Travis, a managing partner at Washington Square Partners, told Commercial Observer during a recent tour of City Point. “The opportunity we thought was, this to us will be Brooklyn’s version of the Four Seasons restaurant in Midtown.”

Mr. Travis said the only other bistro in the borough that will be able to compare would be The River Café under the Brooklyn Bridge.

City Point’s restaurant space, which is near the intersection of Willoughby Street and Albee Square West, has 12-foot-high ceilings in a virtually column-free expanse. A 150-square-foot outdoor terrace, which will overlook the one-acre Willoughby Square Park being built along Albee Square West, will give customers the opportunity to dine al fresco while viewing the activities going on in the green space and shiny new towers in the area. Mr. Travis said the restaurant would serve breakfast, lunch and dinner. The landlords are hoping to rent the space for between $75 and $100 per square foot.

The developers have left the design of the future restaurant undetermined to give a chosen chef the ability to conceptualize it. However, renderings of a potential eatery show a room outfitted with large wooden tables, polished floors, enormous windows and glowing orbs that light the space. (Not bad, ye potential chefs.) The developers are hoping to select a chef this summer and open the restaurant next year.

The exterior will be covered in metal panels and terracotta, matching the rest of the retail section of City Point. A large glass opening will make the restaurant partially visible from the street below and artwork will be crafted by a local Brooklyn artist to fill the glass façade, according to Mr. Travis, who could not reveal art or artist just yet.

Of course, it’s not just the artwork that’s going to get customers to come to the restaurant.