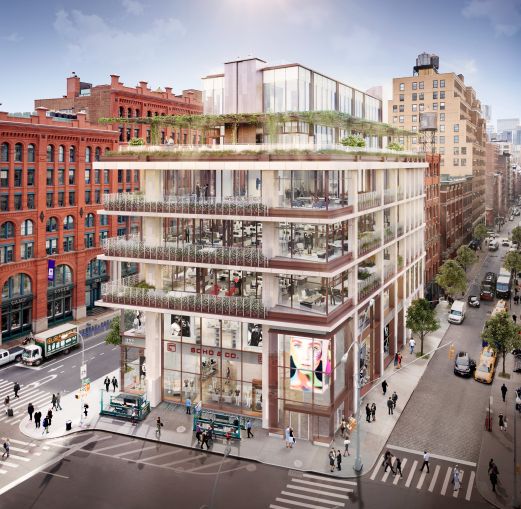 Related Companies has received $88 million in construction financing from Deutsche Bank for the development of a new eco-conscious, mixed-use building at 300 Lafayette Street in Soho, the former site of neighborhood bar Puck Fair and a BP gas station.

The funds include a $69 million construction loan, which will be used for costs of improvement in renovation and development of the project, as well as a $19 million project loan, according to city filings.

Related and Manhattan-based LargaVista are transforming the property—which spans an entire block between Crosby, Lafayette, East Houston and Jersey Streets—into an 80,000-square-foot boutique office and retail building. The property will include 50,000 square feet of office space on the top four floors and 30,000 square feet of flagship retail space. The seven-story development is the first new Class A building in the Soho district in more than 100 years, according to a release by Related.

Related has already received several inquiries from prospective retail tenants, Avi Kollenscher, a senior vice president at Related, told Commercial Observer, but for now the developers are focused on the property’s construction.

The $200 million project is now fully capitalized and has an estimated completion date of first-quarter 2018, Mr. Kollenscher said. It will be highly visible in the neighborhood, with 300 feet of frontage each on Crosby, Lafayette and East Houston Streets. Demolition is currently underway on the three structures that occupy the site. Puck Fair bar, which called 298 Lafayette Street home for 16 years, closed its doors for the last time on March 27.

Eco-friendly architect COOKFOX designed the building, which includes a significant amount of outdoor space—each floor has a terrace and there is also a rooftop garden. Rick Cook, the architect behind the sustainable Bank of America Tower at One Bryant Park, led the project. The  building meets the demand for high-end office space with access to nature, Mr. Kollenscher said. “It’s a very interesting adaptive re-use of the site,” he said, referring to the stark contrast between the former occupancy of a gas station to an environmentally-focused property.

As previously reported by CO, American International Group provided a $40 million mortgage to LargaVista for the fee simple interest in the development site in December 2014.

A spokeswoman for Deutsche Bank did not respond to requests for comment.