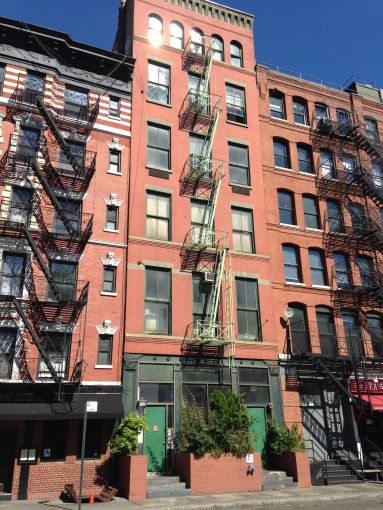 The estate of Madeline Arakawa Gins and husband Shusaku Arakawa has sold the well-known artist and architecture couple’s Greenwich Village home and studio for $15.4 million, Commercial Observer has learned.

Proceeds from the sale of 124 West Houston Street will go to the Reversible Destiny Foundation, which the couple founded in 1987 to promote their abstract art.

Gins and Arakawa, who died in their 70s at 2014 and 2010, respectively, bought the six-story, 13,150-square-foot building between Thompson and Sullivan Streets in 1966, according to Eastern Consolidated, which represented both parties in the deal. The company would not disclose the buyer, but said it’s a local investor who owns properties in Brooklyn.

“The Arakawa/Gins Building has a rich history of innovative art and architecture produced by the original owners and other artists including Bob Dylan, who used the ground floor as his private rehearsal studio,” Eastern Consolidated’s Peter Hauspurg, who represented the seller with colleague Evan Papanastasiou, said in prepared remarks. “Because the property was under the same ownership for 50 years, the building’s remarkable original architectural details remain intact.”

The property features 14-foot ceiling heights and open-floor plates without columns on floors two through six. It also has large windows that let in natural light.

Gins and Arakawa used the building as their residence and art studio until Gins’ death. Their foundation, which operated from the building, relocated to 110 Lafayette Street. The couple’s most well-known project is the Reversible Destiny Lofts-Mitaka in Memory of Helen Keller, which is a bright, multicolored apartment complex in Tokyo, completed in 2005.

Except for an occupied rent-controlled apartment on the fifth floor, the building is currently vacant. The new owner plans to restore the building, renovate the vacant apartments and turn the ground floor and basement into a retail space, according to an Eastern Consolidated spokesman.

“This property will give the new owners a blank canvas that will allow them to come in and redevelop a unique space on one of the hottest commercial corridors in New York City,” Jonathan Schwartz of Eastern Consolidated, who represented the buyer, said in a statement.  “The building is located in a residential zoning district with commercial uses permitted on street level, making it ripe for multiple uses.”