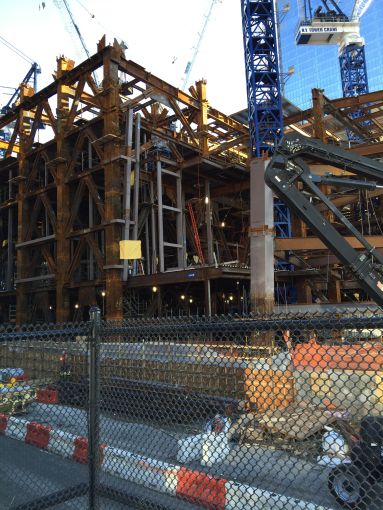 Related Companies and Oxford Properties Group’s Hudson Yards development could pay for a slew of transportation programs with the tax revenue it’s generating with their multi-decade project along the Far West Side, according to a new report commissioned by the companies. The 38-page study, prepared by economic study group Appleseed, examines the economic benefits of their complex for tenants, the surrounding area along with the city government and the Metropolitan Transportation Authority.

Using currency expectations for 2018—the midway point of construction—the study estimates that the MTA will take in $1.78 billion in tax money from the multi-phased construction between 2012 and 2025. That will be followed up in the coming years by roughly $89 million in annual tax money to the state entity once the full complex is operational.

What does $1.78 billion buy you if you’re the MTA? The report quantifies what the money could be used for in both the small- and large-scale projects. It suggests the nearly 15 years of tax revenues could fund phase two of the Second Avenue subway, which the MTA expects will cost $1.59 billion in its recently passed five-year capital plan. That would extend the long awaited line from East 96th Street to East 125th Street and Lexington Avenue.

Following construction, the developers will continue to pay more than $89 million annually in in rent for its ground lease over the authority’s rail yards and taxes that will directly go to the MTA, according to the report. That effectively could pay either to renovate four of the city’s 469 subway stations, buy 35 new subway cars, get 136 new buses or replace three and a half miles of track and switches.

The report notes this money is going to the authority through a series of city and state tax programs during and after the 14-year construction period. One includes payment-in-lieu of mortgage recording taxes, which is a financing fee for the developers’ buildings. Closing on financing for the the under-development 55 Hudson Yards, the planned 50 Hudson Yards and the residential towers slated for the western part of the site is expected to generate $280.4 million through these payments, the report estimates.

While the report didn’t provide a metric for how this is calculated, the financing for Related and Oxford’s properties has been significant. Last November, the developers closed on $1.3 billion in financing for 15 Hudson Yards, the first residential tower at the site that will feature 285 condominium units and 106 affordable rental units. That was carried by a $850 construction loan from The Children’s Investment Fund, tax-exempt bonds issued by the New York State Housing Finance Agency and equity from the developers.

One of the largest financing packages for the development was the combined closing on the 90-story 30 Hudson Yards along with the dining and shopping component attached to it. Nearly $2.2 billion of the $5 billion financing was debt, as Commercial Observer has previously reported. Bank of America Merrill Lynch, Wells Fargo and Canadian Imperial Bank of Commerce provided a $690 million loan for the office condo tower; Deutsche Bank, Bank of China, Industrial and Commercial Bank of China and Crédit Agricole provided a whopping $1.5 billion for construction of the high-end shopping center.

Payment-in-lieu of taxes, or PILOTs, has been and will continue to be a major program to fund transportation, according to the report. Related and Oxford, like most developers in the Hudson Yards Special District, are exempt from the city’s normal property taxes. Instead, the PILOT payments go to the New York City Industrial Development Agency, an arm of the New York City Economic Development Corporation. From there it goes to another subsidiary: the Hudson Yards Infrastructure Corporation, or HYIC, which coordinates infrastructure projects in the district and pays down the debt on those public works.

But paying down the debt on the more than $2 billion project is still a long way away. The Independent Budget Office reported in 2015 that HYIC has issued $3 billion in bonds backed by revenue by developers in the special district.

The report expects that by the time the Related and Oxford buildings are done, they and the tenants will be paying $81.3 million annually through the program. HYIC uses 84 percent of the money it takes in from all the developments in Hudson Yards district to pay down the debt service on bonds issued to fund the 7 train extension, which opened in September 2015, according to the survey. Related and Oxford would thus be contributing $68.3 million a year to pay down the debt.