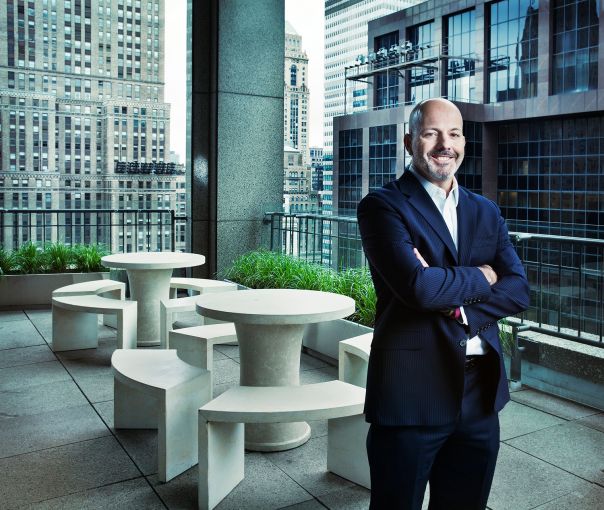 In the early 1990s, six months into his first job out of college, Eric Gelber walked into his boss’ office at what’s now Forest City Ratner Companies and said his current job as a property manager wasn’t for him. He wanted something with a little more freedom.

Mr. Gelber’s boss said he could collect rent and handle leasing for the property instead. So the young real-estate-pro-in-the-making started communicating with tenants, learning about their businesses and in some cases, why they couldn’t pay the rent. He also, with the help of another leasing expert, signed Discovery Zone and Toys “R” Us to retail space in Albee Square Mall.

“It really helped me focus on understanding all the players,” he said. “You can’t just ram opinions and situations down people’s throats. I want to understand what you’re about, what your goals are. I know what the goals are on my side of the table. You’ve got to figure out how to make those mesh and create a transaction.”

This would begin the retail career of Mr. Gelber, who joined Edward S. Gordon Company in 1994 as part of what’s today billed as CBRE. As an executive vice president in the brokerage’s retail division, the 49-year-old father of three has been doing big deals representing either landlord or tenant. Since joining the brokerage 22 years ago, his track record includes $4 billion worth of leases and sales, according to CBRE.

Two of his deals from last year are currently in the running for the Real Estate Board of New York’s Retail Deal of the Year award. The first submission was representing Foot Locker in a 36,000-square-foot lease at 1460 Broadway at the corner of West 41st Street, which will become the retailer’s flagship store. The second was for Sephora’s 17,000-square-foot deal at 580 Fifth Avenue between West 47th and West 48th Streets, in which Mr. Gelber was on a team that represented the landlord.

It’s an understatement to say Mr. Gelber has good hustle. It’s literally true. While he’s doing these deals in some of Manhattan’s hottest retail markets, the Westchester County resident is running ultra-marathons in Central Park and California’s Death Valley to raise money for the Multiple Myeloma Research Foundation, a cause close to his heart after losing a friend to the illness four years ago.

“He knows his business,” said C. Bradley Mendelson, his former boss at Edward S. Gordon Company who’s now a vice chairman at rival Cushman & Wakefield. “He knows how to conduct himself. You have to be able to manage people’s expectations, and I think Eric has done a great job at that.”

The story of the Foot Locker deal at 1460 Broadway dates back to roughly 2013 when the landlord Equity Office had brought him in to help repurpose the building’s retail and market it. The building was home to Chop’t, Godiva and Starbucks. Most of the leases were expiring—with the exception of Starbucks, which Mr. Gelber began restructuring. But that work came to a halt when Equity Office, which owned the building with The Swig Company, put its controlling stake on the market.

When Himmel + Meringoff closed on the controlling stake of 1460 Broadway in 2014, the new owners also decided to go through the process of remarketing the property (they changed the name to 8 Times Square) and split the building into separate office and retail portions.

And they, too, had designs for the retail: The plan was to enlarge the single-story retail to three stories, or 36,000 square feet, with a glassy exterior and bright signage.

Mr. Gelber had an idea of who should take the space: Foot Locker.

He had briefly discussed a plan with the retailer when 1460 Broadway was still owned by Equity Office and was greeted with interest but some skepticism from Foot Locker, Mr. Gelber recalled.

But almost immediately after Himmel + Meringoff closed on the buy, Mr. Gelber reached out to everybody again.

Foot Locker executives weren’t really looking to do a flagship of that size or move outside of the Bow Tie district. The opportunity for Foot Locker, however, became too good for it to house several of its subsidiaries in one place, the pricing and signage that Mr. Gelber said will be prominent when viewed from several blocks to the south or to the north.

“They weren’t looking for that at all,” Mr. Gelber said. “I think they were looking to do Foot Locker and the [basketball-focused sneaker retailer] House of Hoops, and that was kind of it. This gave them the opportunity to do not just a flagship, but it’s going to house all of their brands.”

Jason Vacker, Himmel + Meringoff’s director of leasing, worked opposite of Mr. Gelber on the lease and said the deal expands the traditional borders of Times Square south of West 42nd Street.

Construction of the store has already begun, and Footlocker is expected to open during the holiday shopping season, according to Stephen Meringoff, a co-founder of Himmel + Meringoff.

That was just one of the two deals Mr. Gelber did this year that has been submitted for the REBNY award. With his colleagues Andrew Goldberg and Preston Cannon, he represented the landlord (Forty Seventh Fifth Company) in a two-story deal with Sephora at 580 Fifth Avenue. The cosmetics retailer is taking about 17,000 square feet at the building. That deal particularly stands out because finding the right tenant took five years; it also involved restructuring deals with existing tenants and terminating the leases of others.

“It continued the solidification that being south of [Rockefeller] Center is a good place to be,” he said. “They had their reason for moving from where they are today, but they didn’t go north. They stayed south.”

To be in the running for a REBNY Deal of the Year award employs a different nomination process from traditional awards. Instead, brokers or the brokerage usually submit deals from a given year that they believe stand out. REBNY then weeds out those that meet the 13-rule criteria to be in the running. To be eligible, nominees have to be a licensed salesperson or broker. Contestants with an ownership stake in a building are disqualified. A team of more than four brokers must explain what each individual did on the deal that made it really pop. (Entrants also have to be present at the June 7 awards ceremony.)

And this year’s roster of deals is diverse and unique. Other transactions up for consideration this year include: TurnStyle, the retail concourse in the Columbus Circle subway station; two separate leases for auto dealerships at 787 11th Avenue; and Anthropologie at the landmarked 195 Broadway (Mr. Gelber’s former boss, Mr. Mendelson, is in the running for that one). Of the 13 deals, one will be selected as the most creative and another as the most ingenious.

If Mr. Gelber wins for either, it’ll be the third time he takes home a REBNY award. He first won in 2001 for being a part of a sales team that coordinated Himmel + Meringoff’s $14 million sale of 1356 Broadway between West 36th and West 37th Streets to Haier America. Mr. Meringoff joked that every time Mr. Gelber does a deal for the company, the broker wins an award (currently, he’s one for one.) He took home another award in 2006 for arranging Gucci’s flagship store at Trump Tower, which has an official address of 725 Fifth Avenue between and is between  East 56th and East 57th Streets.

It’s not about submitting the biggest deal of the year, Mr. Gelber said. There has to be something particularly special about the retail lease—it has to be intricate and you have to be able to craft a strong narrative about the transaction.

“I think [a submission] has to have whatever you feel it is that makes it that something extra,” he said. “You have to be able to remember because some of these take years and tell the story in its best light. And you see what happens.”

In the case of the Foot Locker deal, that extra something was working first with one landlord and then a new partnership between Swig and Himmel + Meringoff. Part of the challenge, he added, was dealing with Starbucks’ existing lease, relocation rights and termination rights.

“He is hard working, persistent and most importantly a closer,” said David Firestein, a partner of SCG Retail who represents Starbucks in New York City. “He is an athlete, and has the stamina not to give up in both running and real estate.”

The Foot Locker deal was “more than one transaction,” Mr. Gelber said. “I was dealing with one ownership. Then I had to deal with a new, newly formed partnership that you don’t know.”

But when he’s not running around Manhattan arranging these multilevel deals, Mr. Gelber is training for long-distance runs to raise money for multiple myeloma research. He’s done the Badwater run—135 miles in California’s Death Valley on the desert border with Nevada twice (It took 42 hours and 38 minutes in 2012, and 46 hours and 11 minutes in 2015). He’ll take his third and what he says is his final—attempt this September at running 200 miles around Central Park over a 48-hour period in a fundraising effort for the Multiple Myeloma Research Foundation. He made it to 164 miles in 2013, bringing in $140,000, and 176 miles in 2014, during which the run raised $240,000. He took off last year to do Badwater, which raised another $140,000.

Mr. Gelber, a resident of Westchester County, said he runs a few days a week (the rest is cycling or other training) and typically gets up at about 4:30 a.m. Saturdays he tries to build up his endurance, so he awakes  at 3 a.m. to do a seven-hour run to make sure he’s back home in time to have breakfast with his wife, two sons, ages 17 and 14, and 6-year-old daughter.

What’s the trick to getting through a full Saturday after such a run? Don’t let yourself sit down on the couch, he said.

The real estate community has been behind him with his company and colleagues supporting his charitable efforts. They began in 2007 when he ran the New York City Marathon to raise money for researching the incurable disease. At the time, his and his wife’s friend, Anita, was diagnosed with it. (She passed in 2012.)

The runs started to increase in length, and so did the fundraising. If the Central Park trek this year meets the fundraising goal of $250,000, Mr. Gelber said, the runs will have raised more than $1 million for multiple myeloma research.

“The guy’s an animal,” said Winston Fisher, a principal of development firm Fisher Brothers, who also does extreme cycling for charity and whose company has hired Mr. Gelber in the past. “You’re running through Death Valley…the temperature is hotter than the [135-mile] distance.”

Neither can Mr. Gelber. He said the trick is 10-minute catnaps. Commercial Observer  asked why Mr. Gelber decided this would be the last year trying the 200-mile Central Park run. He acknowledged that the plan could change by next year.

“That’s what I say now, but it’s a hard thing to walk away from,” he said. “If people stop donating, it’s easy because I don’t need to do this for me. But every year, we just keep getting so much attention and a ton of money. The exposure is great for the foundation.”