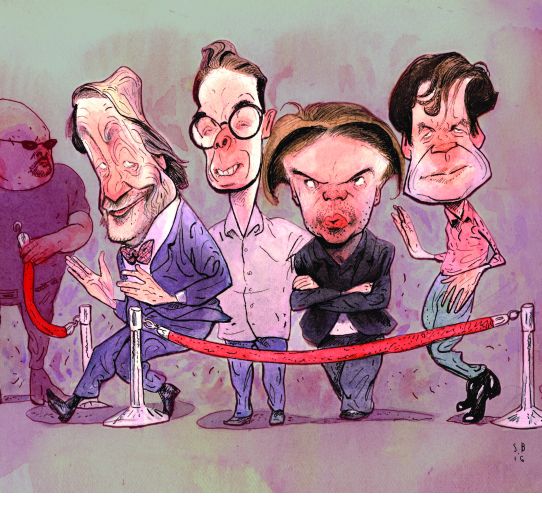 Over the last few weeks we’ve had quite a few people anxiously calling to find out if their name is on the Power 100—and sometimes we’ve had to assume the less-than-likable role of bouncer: “Your name’s not on the list.”

Commercial Observer tries to keep every Power 100 interesting. We admit a few rookies every year—which comes with the accompanying duty of having to turn a few veterans away. (Sorry dude, our inner-bouncer says. The fire department says that “106 most powerful people in real estate” sounds really stupid.)

The highest new entry into the Power 100 was Charles Cohen of Cohen Brothers Realty Corporation, whom we awarded the No. 30 spot. But right next to Mr. Cohen, coming in at No. 32, is an unlikelier pair: Jonathan Butler and Eric Demby.

Mr. Butler is a familiar name to anybody who follows residential real estate (he founded Brownstoner); a few years ago, he and Mr. Demby started a project which would shake up New York retail in a very dramatic way: They founded Brooklyn Flea, the largest public market in the city, and followed it up with Smorgasburg, the outdoor artisan food fair. This new model of having a ton of different high-quality chefs doing relatively inexpensive street food has singlehandedly spawned tens of millions of dollars worth of imitations.

Some names are returning to the list after a brief hiatus. We didn’t have a particularly good reason why Tommy Craig from Hines wasn’t on the Power 100 last year—but with the opening of 7 Bryant Park, not to mention the development of the MoMA Tower at 53 West 53rd Street currently underway, you’d better believe Mr. Craig would be on this year.

Construction is an important part of what we cover, and for this reason we felt that Dan Tishman and Jay Badame of Tishman Construction and Michael Horodniceanu, the president of MTA Capital Construction, should be on.

Some of the names might sound unfamiliar—even to an educated reader.

Most readers know, for instance, that the Jehovah’s Witnesses owns a huge amount of real estate on the Brooklyn waterfront, but we decided to attach a name and a face (Daniel Rice, No. 64) to this real estate behemoth.

Likewise, if you ask who bought the Waldorf Astoria New York, most real estate professionals will correctly answer Anbang, but little else about the company—including the name of its chairman, Wu Xiaohui.

When the deal between Silverstein Properties and News Corp. went south for 2 World Trade Center, many thought that might end 2 WTC once and for all. But Bjarke Ingels’ design for the building,