The Empire State of Mind 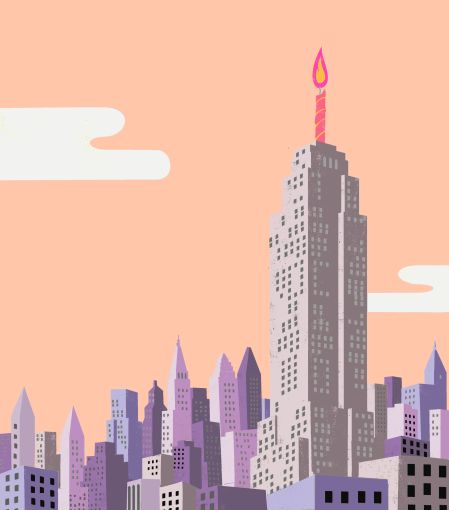 The Empire State Building opened 85 years ago this week.

This week it will be 85 years since President Herbert Hoover pushed a button in Washington, D.C., that symbolically turned the lights of the Empire State Building on for the first time.

King Kong would scale it in 1933; a military bomber would accidentally crash into the 80th floor in 1945 (eight people were killed); it would be Manhattan’s tallest office building on two separate occasions (from 1931 until 1972 when the North Tower of the World Trade Center was opened and from 2001 when the towers fell until 1 WTC opened in 2014); and the American Civil Society of Engineers named the Empire State Building one of the seven wonders of the world.

“The Empire State Building used to be on the New York State automobile license plate,” said John Tauranac, who penned a book on constructing the city’s most famous skyscraper. “It speaks to the city more than any other structure, and that includes the State of Liberty.”

But only in recent years has the 2.8-million-square-foot Art Deco masterpiece become the kind of tower that its developers intended. It was built and opened during the height of the Great Depression, and while few would deny its magnificence, it didn’t initially attract the kind of high wattage tenants one might assume. In the development-happy 21st century, its owners are using it as an example of how you can convert older buildings to compete with the new office stock popping up in Manhattan.

ESRT has made it the crown jewel of its company. In recent years, the public company has poured $550 million into making it a newer, more energy-efficient property that’s attracted established technology companies such as LinkedIn and Shutterstock and high-profile construction group Skanska.

“It’s a world of difference from when it was 75 years old,” said Anthony Malkin, the chief executive officer of ESRT. “Now it’s 85 years young. So as far as we’re concerned, the 85th anniversary is the beginning of a 15-year countdown to the 100th. And we feel that we are going to be even more relevant, even more successful and serving tenants even better when it’s 100 years young than when it is when it’s 85 years young.”

According to Carol Willis’ Building the Empire State, contracts were signed just weeks before the stock market crashed in 1929.

It was completed in a year, making it stand out in construction history, Mr. Tauranac said. Work began on St. Patrick’s Day 1930 and was finished about a year later. The building’s construction provided jobs when there were few other opportunities, he added. Historical accounts estimate that 3,000 people worked on the skyscraper, building four and a half floors each week.

Construction supplies were also easy to come by, which significantly sped along the $40.9 million project. Materials were produced and delivered quickly to the site because few other projects of this scale were being done at the time, Mr. Tauranac said.

“In essence the market had dried up,” he said. “They could place an order for steel one day, and they could get delivery of it while it was still hot from Pittsburgh the next day.”

The work also served as a boon to the city at a time where there wasn’t much else in terms of economic activity, said Richard Anderson, the outgoing president of the New York Building Congress.

“We needed construction work in the city,” he said. “It was a blessing to have a project of that scale in the construction market.”

Mr. Malkin said less import should be put on the fact that the work was done during the Great Depression than on the planning that went into it beforehand. He noted that it was designed with cutting-edge technologies at the time, including the engineering process, and use of new materials such as aluminum.

The Empire State Building was completed in mid-April, 1931, but its owners waited until May 1 to cut the ribbon. (Back then, most residential and commercial leases ended in April; new ones kicked in the first day of May, Mr. Tauranac explained. The Big Apple even dubbed it Moving Day—something of a chaotic municipal holiday.) So Smith and Raskob had to hold off until tenants were ready to move in.

The only problem, Mr. Tauranac said, was that many weren’t ready. Only about 25 percent of the building was occupied when the ribbon was cut. Smith, the president of the tower, planned to use his connections to get government agencies to occupy the building. But he was on the outs with Roosevelt, and Mr. Tauranac said no leases with the government were signed. Building managers would go around at night turning on lights to create the illusion that the Empire State Building was occupied.

“It was already given the nickname ‘the Empty State Building’” by fall 1931, Mr. Tauranac said. “It wasn’t until World War II when space started filling up.”

The occupants weren’t the major automobile companies, advertisers or international corporations that planned to occupy the building. Instead it was dentist offices, employment agencies, one- or two-man law offices and small-time insurance companies.

Mr. Malkin, whose father and grandfather were part of an investment group that bought the building in 1961 with Harry Helmsley, got control of the tower in 2006 from Helmsley-Spear after a nine-year legal battle. (Before taking over, there were various incarnations of ownership and partial ownership.)

He described the hallways as looking more like those of a hotel with continual doors. The 752 suites that formerly made up the building ranged anywhere from 550 to 1,250 square feet, he said. Although it might have been the building synonymous with New York, Mr. Malkin said, brokers wouldn’t even take a tour.

When the executive team of Malkin Holdings sat down to figure out what to do with the tower, the options were either to sell or do a similar renovation as it had done at 501 Seventh Avenue and begun to do at 1 Grand Central Place, Mr. Malkin said. The company settled on a $550 million overhaul to make the building more energy efficient.

Those tenants include LinkedIn, which has expanded over the last several years to nearly 280,000 square feet. The professional networking website first moved into the building six years ago onto the 25th floor. By last July, it took another 130,000 square feet on top of the 150,000 square feet it already occupied. The practical doubling won LinkedIn’s brokers second place in this year’s Real Estate Board of New York Ingenious Deal of the Year award.

Mr. Anderson added that the recent overhaul of the tower has become a model for renovating existing New York structures for the 21st century. “It’s certainly an impressive demonstration of re-purposing,” he said. “It’s a model for how to repurpose a large, urban building.”

ESRT has been renovating and upgrading space as it becomes vacant. Mr. Malkin said there are still a few hundred square feet to be flipped in the coming years. In the meantime the building is hovering around 90 percent occupied. The Empire State Building has a fitness center, seven dining options with an eighth coming and the first-ever, delivery-only Starbucks that delivers to tenants.