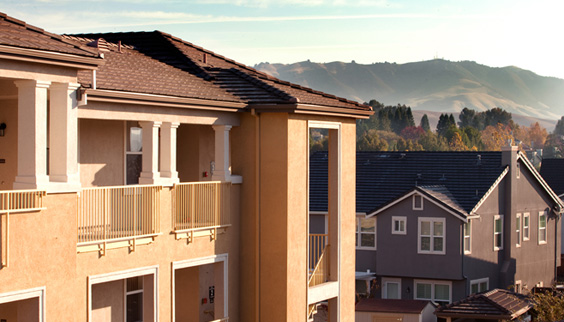 Both the lender and borrower confirmed that the proceeds of the financing are being used to replace old debt on the properties, which are located across three states. The new debt, which was originated out of PMCC’s Los Angeles office, carries a 10-year term with a fixed rate. John Jacobs, a principal with the life insurance company, led the deal.

“The strong underlying fundamentals of the assets and markets combined with our confidence in the operational abilities of the borrower made this an attractive transaction for us,” Mr. Jacobs said through a spokesman.

The portfolio is comprised of six multifamily properties and Blackhawk Office, a 23,903-square-foot suburban office building in Danville. The property was constructed in 1989 and is occupied by eight tenants, including the borrower, Braddock & Logan.

The residences include Villas at Monterosso, a 96-apartment complex in Danville; Monte Vista Apartments, a 1989-vintage property with 138 units in Morgan Hill, Calif.; the 245-apartment Cypress Point in Santa Cruz, Calif.; Rock Creek Ridge, which has 233 units, in North Bend, Wash.; the newly constructed Canyon at Saddle Rock Apartments in Aurora, Colo., which has 263 units; and Outlook Apartments, another newly constructed, multifamily dwelling for 250 families in Littleton, Colo.

In February, Commercial Observer spoke to a number of industry folks who expressed that life companies are at a competitive advantage in 2016, given the volatility in the capital markets and risk retention looming over the market.

David Durning, the president and chief executive officer of PMCC, shared some insights with CO on the matter as well, saying, “Some of the uncertainty about [commercial mortgage-backed securities] has resulted in benefits to us and other life insurance company lenders. [This] is why there have been some large transactions [in which] CMBS would have been an option, or a much more strongly considered option.”