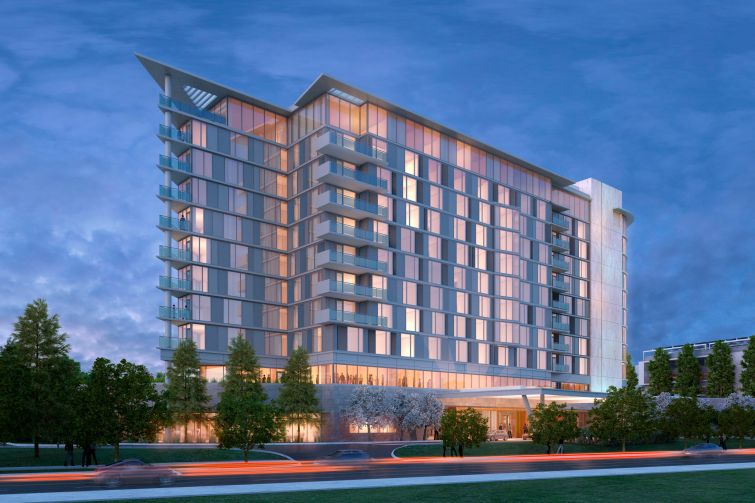 A rendering of the Marriott at 100 Independence Drive in Silicon Valley. danibalbi

It looks like Silicon Valley is getting more than just tech offices.

“Using our balance sheet as a one-stop shop, we can take down the whole transaction,” Warren de Haan, a founding partner and managing director of ACORE, told CO. “Having the ability to do that is pretty unique. The competing bidders would usually be some combination of a bank or a syndicate of banks and a mezz lender.”

When it comes to construction deals, it’s comforting for a borrower to only have to deal with one lender, he said. The transaction closed on March 21 and construction of the NEW 11-story hotel at 100 Independence Drive began two days later.

The hotel, which is slated to open in 2018, will be branded under Marriott International’s Autograph Collection and will have 250 rooms, according to a press release about the groundbreaking. It is part of local California developer David Bohannan’s master-planned, 16-acre mixed-use project called Menlo Gateway.

AECOM and Ensemble recently partnered with Mr. Bohannan, who has been developing that stretch of land east of Highway 101 in the San Francisco Bay Area city of Menlo Park, Calif. for the last decade. Community meetings and planning commission debates stalled the development’s progress, according to a story from Silicon Valley Business Journal. In addition to the Marriott-branded hotel, Menlo Gateway will also have an outdoor venue, fitness club and two office buildings.

“We are pretty late in the cycle with hotels, so when we look at hotel construction we’re extremely selective,” Mr. de Haan said. “The reason we did [this deal] is because we fundamentally and very strongly believe in the real estate, where the real estate is, the demand drivers and the sponsorship.”

“The market really needs a boutique, higher-end branded property. A deal like this makes sense,” he added.

Mr. de Haan pointed to AECOM’s familiarity with construction, being the parent company of Tishman Construction, and Ensemble’s experience doing hotel deals. “We get a lot of comfort knowing they’re the sponsorship,” he said. “[AECOM] knows how to price projects correctly, the project will get built, and [Ensemble] also knows the nuances of [hotel] operations.”

This latest deal is one of many to come, executives at ACORE told COF. This week, the firm received a $1.2 billion capital commitment from insurer Tokio Marine Group’s subsidiary Delphi Financial Group. Delphi originally provided ACORE with $1.6 billion to get the firm’s business off the ground in May 2015, as Commercial Observer previously reported. “[Delphi] reviewed what we accomplished, the quality of the assets we’ve been able to produce, and in turn decided to give us another additional billion dollars,” Mr. Fellows said.

ACORE should be able to use the new capital commitment to originate another $4 billion to $5 billion in whole loans in the next nine to 12 months, he said.

“We want to broaden our ability so we can do a greater percentage of opportunity in the traditional value-add lending space and potentially combine it with Delphi’s to do even larger loans,” he said, adding that ACORE is in talks with other institutional investors to further grow their business.

When CO spoke to Messrs. de Haan and Fellows for The Top 50 Most Important Figures of Commercial Real Estate Finance list in March, ACORE had already completed a total of $2.6 billion in deals.

“There’s no credit problem but there are liquidity issues [in the market],” Mr. de Haan said, and pointed to volatility in the CMBS market, and more bank regulations coming into play. “It’s another reason we were able to raise $1.2 billion. Our investor recognized the opportunity out there.”

Spokesmen for AECOM and Ensemble did not respond to requests for comment.