When it Comes to Retail, Is Bleecker Street Becoming Overshadowed by Washington Street? 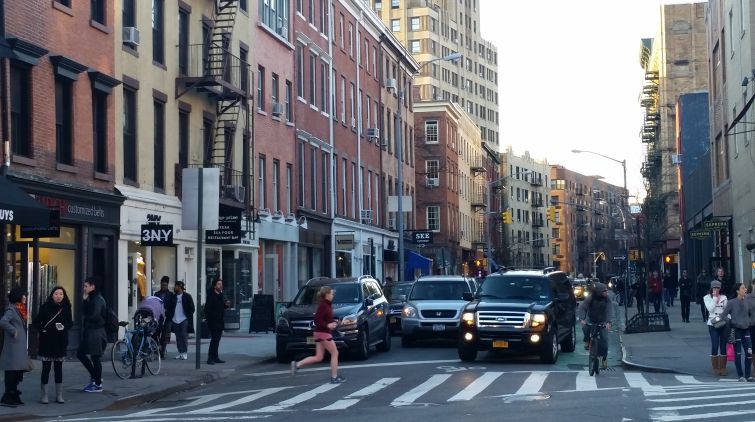 The West Village’s Bleecker Street has enjoyed a pretty good run as one of the unchallenged epicenters of southern Manhattan retail.

Of course, the street has an incredible pedigree to go along with its sky-high rents and tenants. How many streets have a Simon & Garfunkel song named after them? (See Wednesday Morning, 3 AM.) How many strips could you spot Jimi Hendrix, Woody Allen, Lenny Bruce and Bob Dylan on—sometimes all on the same night? (Maybe at the same spot: the Café Wha?, technically on MacDougal, between Bleecker and West Third Streets.)

But beyond its honored place in the lore of 1960s West Village, Bleecker had—up until recently—commanded some of the highest retail rents in the city with some of the swankiest brands known to man.

However, as rents have climbed and the Meatpacking District has increased its street credibility, some tenants now prefer Washington Street to set up shop.

“There’s a lot of availability on Bleecker now,” said Richard Hodos, a vice chairman of the retail services group at CBRE. “A lot. This is not rocket science. The rent got too high. The rents were great on Bleecker 10, 12 years ago. They were affordable relative to sales. And then they got too high, and now they’re unaffordable. Now there’s availability.”

There are eight retail vacancies plus a number of occupied but available spaces on the market along seven Bleecker Street blocks from Bank Street to Seventh Avenue, according to a map provided to Commercial Observer by a brokerage that requested anonymity.

Meanwhile, the neighboring Meatpacking District has gotten stronger than ever, moving beyond its longstanding strength along West 14th Street and Ninth Avenue, with Washington Street proving to be a great alternative for retailers.

“I believe that Bleecker Street rents escalated inappropriately as did many high profile retail corridors,” said Robin Abrams, an executive vice president at Lansco.“At the same time, Meatpacking continued to evolve. Most retailers consider both markets and locate ultimately in one or the other. As Bleecker Street was hot initially, while Meatpacking’s retail continued to evolve, more small space fashion users looked to Bleecker Street. But as those rents escalated, and Meatpacking got stronger with more appropriate co-tenancy, tenants shifted their interest.”

Bleecker Street was lined with pet stores and antique shops when Marc Jacobs opened up shop on the block in 2001. Ralph Lauren followed a year later. At the time, rents were $75 per square foot. By 2005, Bleecker Street rents reached $300 per square foot, according to The New York Times. Five years later, they ranged from $300 to $500 per foot, The Wall Street Journal reported, calling the neighborhood “the new Gold Coast for designer boutiques.”

From 2009 to 2014, Bleecker Street was “hot,” Ms. Abrams said, with luxury retailers looking to Bleecker Street as a denser and less commercial Downtown “alternative” to Soho or Nolita streets. By 2014, she said, rents reached the $600- to $800-per-square-foot range, “with big increases occurring in 2012-2013, as more luxury brands leased small boutique space on the street.”

More recently, deals have closed on Bleecker Street at as low as $500 per square foot, according to a source who requested anonymity.

John Brod, a partner at ABS Partners Real Estate, said all of those factors, plus the fact that “two of the hottest restaurants are here—Santina [at 820 Washington Street] and Untitled [at the Whitney Museum at 99 Gansevoort Street],” have helped to rejuvenate Washington Street, once home to meat suppliers and art galleries.

A couple of years ago, rents on Washington Street ranged from $150 to $400 per square foot, Ms. Abrams said. Today’s asking rents range from $300 near Gansevoort Street to $800 at the corner of 14th Street.

As might have been the case for Bleecker Street, once, the culture is a big draw to Washington Street.

“The architecture is more interesting on Washington Street. The Whitney, to me, anchors the area,” said Anita Grossberg, a retail broker with Douglas Elliman’s Sroka Worldwide Group. “It anchors the Meatpacking and the High Line. There are retailers in the area, and it’s not about the price. People are going to Washington more for the architecture [and] size of available spaces.”

Matthew Seigel, the executive vice president of Thor Retail Advisors, said the asking rent in both places seems to be the same, averaging at about $600 per square foot. The only difference is you’re paying more on Washington Street because if you’re there, you’re likely in a bigger space. “The store size on Washington is a bit bigger,” Mr. Seigel said. “Your gross annual rent obligation is higher on Washington.”

With rents that are somewhat similar, some brokers said that tenants generally pick to open a store on Bleecker or Washington Street, not both. (A few retailers like multi-brand fashion retailer Intermix and French-based men and women’s fashion label Zadig & Voltaire have shops on both.)

“Bleecker Street is certainly one of the best little blocks in Manhattan but is stymied as being a land-locked residential neighborhood with retail spaces largely challenged by existing architecture and retail configurations,” Mr. Brod said.

It’s hard to refute that Washington Street has been drawing a lot of attention.

“The upside of Washington Street today is you have… The Standard and Restoration Hardware [which in 2014 signed a 70,000-square foot lease at 9-19 Ninth Avenue at the corner of Little West 12th Street] and Pastis coming back [at 52 Gansevoort Street],” said Karen Bellantoni of RKF. Bleecker Street, by comparison has a “neighborhood charm,” she said, with “cute little shops” and not as many tourists. Foot traffic is less on Bleecker Street, she said, and “that’s just a function of what’s going on in Meatpacking.”

For Washington Street and the rest of the neighborhood, Mr. Hodos said, “I think Meatpacking is coming back. It was hot, then it wasn’t. The rents were too high. I feel better about Meatpacking today than two years ago.”

With its smaller floor plates, Bleecker Street is best suited for boutique-type stores. “It’s a bit more neighborhoody,” Mr. Seigel. “Washington Street has become pretty unique with the Whitney, the Standard and now Samsung [at Thor Equities and Taconic Investment Partners’ 837 Washington Street where asking rents were $500 per square foot]. I expect a nice mix of contemporary fashion, semi-commerce. The reality is that it now has a very broad appeal. I would expect categories that haven’t been present on Washington Street to start to give it consideration because of the traffic.”