West in Show: Filling up the 7 Million Square Feet of Manhattan West 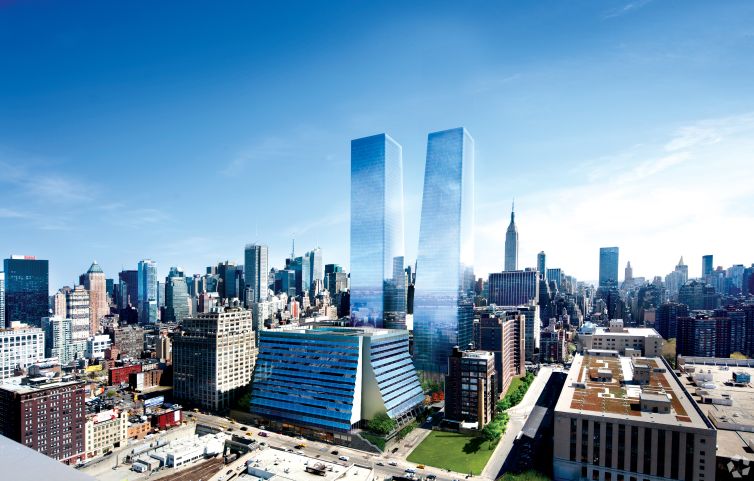 A rendering of Manhattan West.

No longer is the Far West Side the place you go for a new car, to attend a convention or to participate in an illegal activity or two. But with millions of square of development—about the size of Dallas’ downtown—the patch between West 30th and West 40th Streets is really coming alive.

Brookfield Property Partners has dibs on West 31st to West 33rd Streets between Ninth and 10th Avenues, where it is developing the 7-million-square-foot Manhattan West project. That includes new office and repurposed office space built when John Lindsay was mayor, as well as residential and amenity-style retail. New commercial tenants have headed into the existing office stock and residents could start making the area home next year, according to the team behind the development.R

The developer has poured roughly $200 million into 450 West 33rd Street, giving it a new glass façade and the new name 5 Manhattan West. Work at the 2.2-square-foot, 46-year-old building should be done either by the end of this year or the beginning of 2017, according to Duncan McCuaig, a senior vice president of leasing at Brookfield.

“This is our large floor plate format building in New York,” he said. “There’s probably no more than a dozen buildings with floors greater than 100,000 square feet. So we have that product here, in a newer redeveloped, redesigned building right in the middle of the fastest-growing neighborhood in New York.”

At the corner of Ninth Avenue and West 33rd Street, Brookfield is developing the 2.1-million-square-foot 1 Manhattan West. Law firm Skaddan, Arps, Slate, Meagher & Flom will anchor about a quarter of the project with about 550,000 square feet. Construction is slated to wrap up by 2020, Mr. McCuaig said, with Skadden, Arps and other future tenants assuming space as soon as 18 months before that time to begin building out their spaces.

A twin south tower will follow that, also 2.1 million square feet, at the corner of Ninth Avenue and West 31st Street. When that tower will be built is still up in the air and dependent on securing a tenant to fill a sizable portion of it, Mr. McCuaig said. Right now, the focus has been on leasing floors of 1 Manhattan West with more tenants, he added.

“We haven’t inked an anchor tenant for the south tower yet,” he said. “Because this building [1 Manhattan West] needs to fill up.”

A 62-story residential tower at West 31st Street and 10th Avenue is set to top out in April, Brookfield Head Ric Clark told Commercial Observer in an interview earlier this month. He and Mr. McCuaig said residents could start moving into the tower’s studio and one-bedroom luxury rental apartments as soon as 2017.

“That will actually start to be populated in about a year,” Mr. McCuaig said.