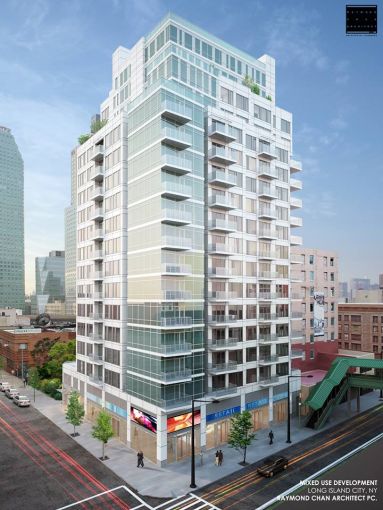 The mortgage is being used to put up an 18-story tower dubbed One Queens Plaza at 42-10 27th Street between 42nd Road and Queens Plaza South. The terms of the loan is 36 months and allow Lions Group to refinance after maturity and take a permanent mortgage with the bank.

One Queens Plaza is not the Lions Group’s first venture in Long Island City. The firm was founded in the 1980s by brothers Albert Shirian and Ramin Shirian and transitioned from developing single-family homes in Long Island to constructing multifamily properties all over Queens.

“The big story is more about the area,” Aaron Shirian, a managing director at the family-run firm, told CO. “That’s what makes this property so valuable to us. We see Queens Plaza as one of the most underrated areas in the whole city. The access because of the subway is unmatched and the area becomes more and more beautiful every day.”

Mr. Shirian said that the Lions Group was the first developer to get a permit following the rezoning of Long Island City 12 years ago. Since then, the firm has constructed The Vista at 44-15 Purves Street, The Bindery at 47-34 11th Street, 44-27 Purves Street and 10-50 Jackson Avenue. They also have four multifamily projects currently under development in the area.

“We’ve seen it really blossom into an area full of young professionals and young families,” he said. “There really was not much there before. We really believe in the area and really believe that it’s nowhere near its peak.”

Foundation work at One Queens Plaza has already begun and the apartment building is slated to open in the first quarter of 2018, said Eric Benaim, the founder and the chief executive officer of Modern Spaces who is handling marketing and leasing for the residential aspects of the project. Architect Raymond Chan is designing the building.

Upon completion, the tower will house a mix of studios and one- and two-bedroom units, ranging in square footage from the low-400s to the low-900s.

The development will also include a parking lot and 8,000 square feet of ground-floor retail space. Mr. Benaim told CO that the retail component could be divvied up for several tenants, and companies from Starbucks Coffee to Duane Reade have shown interest.
“We always get comfortable with the client first, and we like the Lions Group and the Shirians,” said Bank Leumi’s Christopher Gregg, who worked on the deal. “They have a great track record and have done a lot of successful developments in Long Island City.”