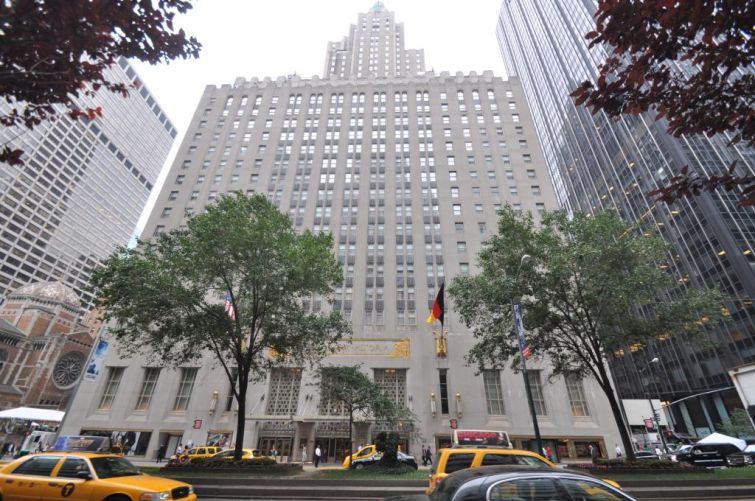 The Waldorf Astoria New York at 301 Park Avenue, which Anbang insurance Company scooped up for $1.95 billion in 2015. Now, the Chinese insurer is looking to up its hotel portfolio with the acquisition of Starwood Hotels & Resorts Worldwide.

The bidding war for Starwood Hotels & Resorts Worldwide is not over, as Chinese Insurer Anbang Insurance Group has proposed a buyout of roughly $14 billion, topping Marriott International’s most recent offer of $13.6 billion.

Last Friday, Anbang, in partnership with J.C. Flowers & Co. and China-based Primavera Capital, came to Starwood with a non-binding proposal of $81 per share in cash for the acquisition, and today upped its offer to $82.75 per share, according to a press release from Starwood.

Stamford, Conn.-based Starwood is currently in discussions with Anbang and its partners about the non-price related details of the deal, and the companies are working to finalize a binding proposal, according to the statement. A source with intimate knowledge of the transaction previously told Commercial Observer that if Anbang were to complete its purchase of Starwood, the hotel firm would continue to operate as is, whereas if Marriott bought it, significant layoffs would incur.

Marriott first announced its intent to merge with Starwood in November 2015 at $76 per share—a move that would create the largest hotel company in the world, with more than 1.1 million rooms across 5,500 hotels.

Under the terms of the original deal, Starwood would have to pay Marriott $400 million to terminate the pending merger, but after the firm courted Anbang’s $13.2 million offer on March 18, the new terms of Marriott’s binding offer require Starwood to shell out $450 million as well as $18 million for costs related to financing the transaction.

Anbang’s now second offer for Starwood, which has an international portfolio of 1,300 properties in about 100 countries, is not the only indicator that it’s here to stay. Last year, the Shanghai-based firm scooped up the Waldorf Astoria New York for $1.95 billion and has since committed to purchasing 16 U.S. hotels and resorts for $6.5 billion from Blackstone Group.

“Basically the impetus for this money coming over is imperialism,” said Robert “Toshi” Chan, the chief executive officer and founder of the Flatiron Hotel and founder of investment firm American Born Chinese Capital. “[Chinese investors] are trying to get as much money out of the country as possible because you’re really restricted with what you can do with it.”

Anbang’s reach into the U.S. does not end with scraping up hotels. Late last year, the firm announced plans to buy Fidelity & Guaranty Life for $26.80 per share.
“It’s basically Chinese imperialism,” Mr. Chan said. “They’re taking U.S. dollars which they made through the trade deficit and are spreading their influence, not with weapons or with violence but with money.”