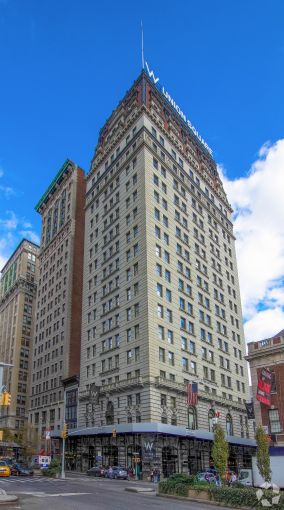 You can now check into a high-end Union Square-area hotel and never leave as the W Hotel Union Square is for sale.

Eastdil Secured is marketing the 270-guest room hotel (including 26 suites) at 201 Park Avenue South at East 17th Street for sale as a possible “conversion to residential use,” according to the marketing materials. Or, the new owner could “pursue a global branding strategy or convert to an independent hotel.”

At 20 stories, the roughly 205,473-square-foot 1911 Beaux-Arts-style hotel (180,456 square feet at grade and 25,017 square feet below grade) was renovated and reopened in 2000. It is home to two food and beverage outlets, Irvington, a three-meal-a-day restaurant, and the W Living Room, a bar and lounge. Both are operated via a lease agreement with the Gerber Group, according to the marketing flyer. The hotel also includes 6,630 square feet of meeting space, a fitness center and a business center.

Maryland-based Host Hotels & Resorts purchased the hotel, which sits on a 9,200-square-foot lot, in September 2010 for $185.3 million, property records indicate.

Adelaide Polsinelli of Eastern Consolidated, who is not involved in the deal, said the hotel could sell for between $800,000 to $1 million per key, or $216 million to $270 million.

She said the Related Companies-developed hotel has a “great pedigree,” and is in “an exciting and vibrant location.” In addition, she noted, it’s across the street from Union Square Park, is “easily accessible to transportation [and is a] quality brand.”

Sean Hennessey, the chief executive officer of hotel advisory Lodging Advisors, emailed: “It did sell for $1.1 million per key back in the pre-Lehman [Brothers] world. Values are under some pressure now because room rates in New York City have been flat and expectations of appreciation are moderating. The pending merger of Marriott and Starwood is causing some investors to hold off on evaluating properties tied to those companies until the post-merger plans become clearer.”

Lawrence Wolfe, who is leading the Eastdil Secured marketing team, didn’t immediately respond to a request for comment.