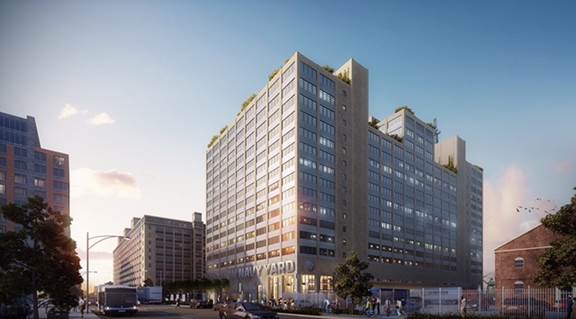 Russ & Daughters, a fourth-generation fish market and bakery based on the Lower East Side, has inked a deal to anchor the Brooklyn Navy Yard’s ground-floor food hall, the landlord announced in a press release.

The grocer will use the space at Building 77 for retail, as well as shipping, catering and training, according to the Brooklyn Navy Yard Development Corporation, the city-controlled entity that runs the waterfront district including the Navy Yard. Russ & Daughters will take 14,000 square feet of the 60,000-square-foot ground-floor retail space, according to The Wall Street Journal, which first reported news of the deal. Terms of the deal were not immediately available.

Founded in 1914, the company is today run by cousins Niki Russ Federman and Josh Russ Tupper. Russ & Daughters will be able to hire 30 more employees to staff the Navy Yard location, which has an official address of 77 Flushing Avenue between Cumberland and North Oxford Streets. The deal also marks the first retail location outside of Manhattan for the century-old company.

“Russ & Daughters has been a part of the fabric of New York for 102 years,” Ms. Federman said in prepared remarks. “We hope to be around for at least as many more. The opportunity to continue our growth—within the Brooklyn Navy Yard, a 200-year-old force of industry and development in New York—is not only incredibly exciting, it’s a natural fit.”

The building is undergoing a $185 million renovation that’s slated for completion in 2017, according to the release. Mayor Bill de Blasio, Brooklyn Borough President Eric Adams and the New York City Council have kicked in about $80 million of those funds. The city and Navy Yard officials said the 1.1-million-square-foot building will create 3,000 jobs. JLL is marketing the office portion.

“The sweet smell of success will soon be wafting from the halls of Building 77, as Russ & Daughters anchors a new hub of manufacturing that will serve up quality jobs—and quality bagels—to Brooklyn and beyond,” Mr. Adams said in a statement. “I am proud of the ‘foodie’ culture that our borough has fostered through our food manufacturing renaissance, and even prouder that I can invest in this present and future staple of our economic landscape through development at the Brooklyn Navy Yard.”