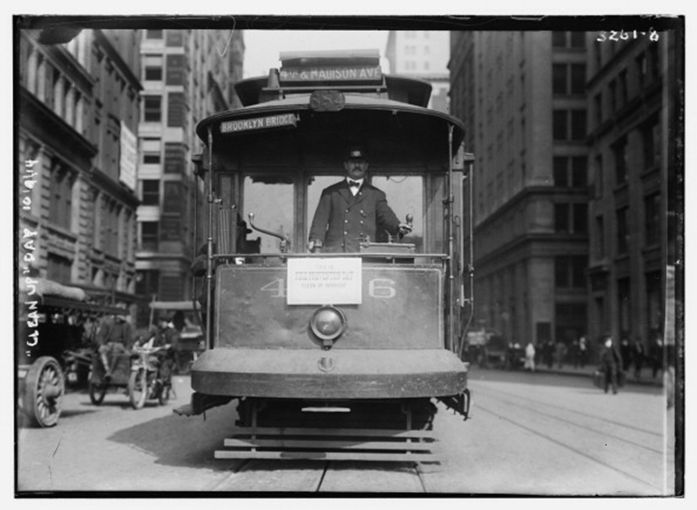 Last week the city rolled out a proposal for a $2.5 billion streetcar system that connects the northern reaches of Queens to the bustling Sunset Park section of Brooklyn. Celebrations were in order; references to A Streetcar Named Desire were aplenty. There were futuristic designs and talk of the boroughs as the lifeblood of the city. But we thought it was best to take a look back at Gotham’s history with this mode of transportation, which came long before the subways, Central Park or the Brooklyn Bridge. Here are five facts and figures about New York and its trolleys.

185 That was how many years ago the first street car in Manhattan was commissioned (the year was 1831). It originally ran from the Harlem River to 23rd Street, according to Steven L. Meyer’s 2005 book on the early transit system, Manhattan’s Lost Streetcars. There was a debate on whether the streetcars would be pulled by steam engines or animals, with officials opting for the latter in southern parts of the line. (We imagine the anti-horse carriage de Blasio Administration wouldn’t back that today.)

470 At its height, the streetcar industry in New York City was made up of 470 miles of tracks through the borough, according to Mr. Meyer’s book. In Manhattan, that included most major thoroughfares, including Broadway, Eighth Avenue and Third Avenue.

1890s Brooklynites were at such a risk of getting hit and killed by a maze of streetcars that residents of that city (yes, Brooklyn was a separate city until 1898) were called Trolley Dodgers. By the mid-1890s, the city’s baseball team was nicknamed the Brooklyn Trolley Dodgers, according to reports, historians and the team’s website. By the early 1900s, the name became official and was truncated to: the Brooklyn Dodgers. (Bet Los Angeles doesn’t know that one!)

400,000 While you might not be able to tell today, the Brooklyn Bridge once had tracks for streetcars and subways. When the span had four lanes of tracks, 400,000 people crossed it in trolleys and trains per day, according to Sam Schwartz, a transit planner and author of Street Smart: The Rise of Cities and the Fall of Cars.

1957 Until nearly 60 years ago, the Queensboro Bridge was home to a station halfway through East River span. Riders could take a streetcar to the mid-bridge station and then an elevator to what was then Welfare Island (now Roosevelt Island), Mr. Schwartz said. The station closed in 1957, and the streetcar industry followed, with many of the tracks getting ripped up or paved over, he added.