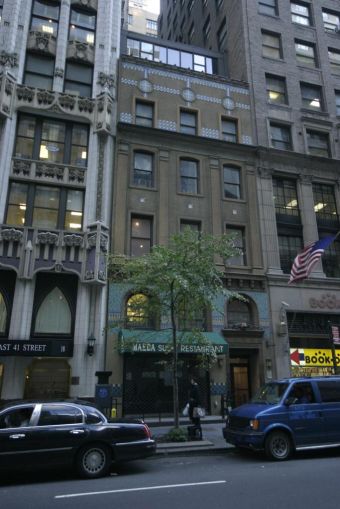 Jeffrey Tucker, a founding partner of investment firm Fairfield Greenwich Group and a victim of Bernard Madoff’s ponzi scheme, is opening a Midtown pizzeria that takes the farm-to-table concept quite literally.

Mr. Tucker’s Gansevoort, N.Y.-based Stone Bridge Farm has signed a 12-year lease at 16 East 41st Street between Madison and Fifth Avenues for a 3,800-square-foot pizzeria, Commercial Observer has learned. This will be the farm owner’s first restaurant ever.

The eatery, Stone Bridge Farm Pizza & Salad, will occupy 2,300 square feet on the ground floor and a 1,500-square-foot lower level at the location near Bryant Park, according to Lee & Associates NYC, which handled negotiations for the tenant. The restaurant is set to open in the spring. The asking rent for the ground floor is $150 per square foot, according to CoStar Group.

“Between the farm-fresh ingredients, artisanal pizzas and salads, assembly-line ordering system, open-hearth ovens and all-natural beverages, beer and wine, Stone Bridge Farm Pizza & Salad will be a new concept in fast-casual dining,” Cory Gahr of Lee & Associates, who brokered the deal on behalf of the tenant, said in a prepared statement. “The tenant is very excited to get started, and the neighborhood is full of workers, tourists and residents who are always eager for new dining options.”

Ben Birnbaum and Jeffrey Roseman of Newmark Grubb Knight Frank represented the landlord, Alan Getz of Vanguard Investors. Messrs. Birnbaum and Roseman did not immediately return a request for comment via a spokeswoman.

The pizzeria will source ingredients from Stone Bridge Farm, which grows a variety of produce and also has a separate horse farm.

Mr. Tucker’s Fairfield Greenwich Group, which had one of the largest exposures to Madoff’s ponzi scheme, lost $7.5 billion, according to The New York Times. Mr. Tucker began listing the more than 420-acre farm for sale at $18 million with Select Sotheby’s International Realty following Fairfield’s loss, as the Albany Times Union previously reported. The farm is currently offered for about $13 million, according to the brokerage. Mr. Tucker was not immediately available for comment.