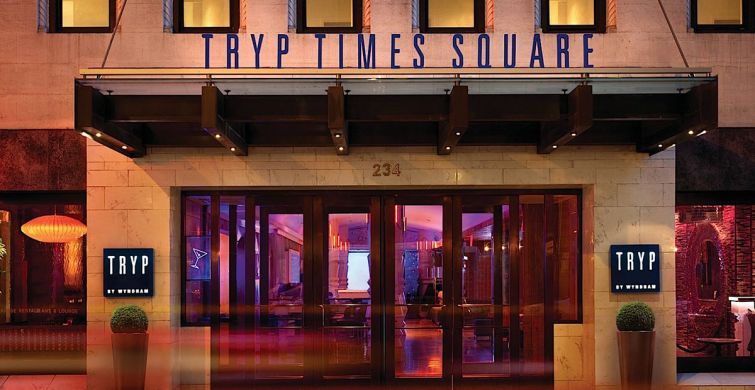 A $70 million commercial mortgage-backed securities loan on the TRYP by Wyndham New York Times Square—formerly Best Western Plus President Hotel at Times Square—has been returned to the special servicer, with the borrower currently seeking a loan modification.

New York-based Dream Hotel Group, which was rebranded from Hampshire Hotel & Resorts, is requesting a second modification on its remaining $70 million in debt, according to data provided exclusively to Commercial Observer by Trepp.

The loan, which is dubbed “Best Western President,” was securitized in the Credit Suisse-sponsored CSMC 2006-C5 deal in 2006 with an original balance of $80 million. The note is the fifth largest in the overall pool and accounts for 3.12 percent of the remaining collateral, according to Trepp.

“The Best Western President in Times Square has flip-flopped between a delinquent and non-delinquent status for the past year,” said Sean Barrie, an analyst at Trepp. “Financials have been downhill since 2010, when the firm posted a 1.2 debt service-coverage ratio. Unfortunately, the property has been generating negative cash flow for the past two years.”

Since 2007, the DSCR on the 334-room hotel, which sits at 234 West 48th Street between Seventh and Eighth Avenues, has seen a steady decline. The DSCR saw its peak of 1.93 in 2007 and dropped to 0.75 in 2013. At the time, the borrower stated, “The Times Square submarket continues to struggle due to increases in the supply of new hotel rooms.” Shortly thereafter, in May 2013, the borrower faced imminent payment default. In 2014, the DSCR hit a low of -0.92, and by the end of the year servicer LNR Partners modified the deal terms because of low debt service-coverage ratio. As of December 2015, there were 40,520 hotel rooms in the Times Square market, with 2,863 rooms under construction, according to STR, a firm that tracks hotel data.

Under the new terms, the loan was made interest-only with a decreased rate of 5.75 percent from 6.43 percent and the borrower paid off just more than $7.5 million in debt, bringing the balance down to $70 million. Simultaneously, the hotel underwent a rebranding and traded in its Best Western flag for TRYP by Wyndham, according to a November 2014 article by The Wall Street Journal.

As of the third quarter of 2015, the revenues for TRYP at Times Square were $17.2 million, with expenses totaling roughly $17.5 million, according to data from Trepp. The DSCR based on the 16-story building’s net cash flow remained below zero at -0.28 and the NOI hit -$291,168. Room rates currently start at $91 per night, according to TRYP’s website.

Calls to Dream Hotel Group were not returned by time of publication. A representative for LNR did not immediately respond to inquiries.