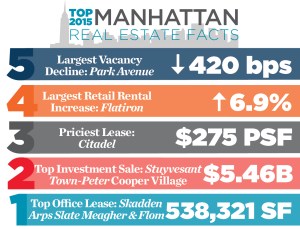 10. Financial services finished the year with the largest market share of new leases at 28.9 percent, overtaking TAMI (technology, media, advertising and information) for the first time since 2011.

7. The highest price per square foot paid for an office building was $4,551 at 730 Fifth Avenue by Wharton Realty and Sutton General Growth Properties.

6. Not surprisingly, Park Avenue also had the greatest vacancy decline of 420 basis points to 9 percent.

5. The largest asking rent increase for a retail submarket was in Flatiron, up 6.9 percent to $446 per square foot.

4. The submarket with the largest year-over-year increase in leasing activity was Park Avenue, up 91.6 percent.

3. The most expensive lease of the year goes to Citadel, which leased 199,000 square feet at 425 Park Avenue and is reportedly paying $275 per square foot for the top two floors of the deal.

2. The top investment sale of the year was the purchase of Stuyvesant Town-Peter Cooper Village where the Blackstone Group and Ivanhoé Cambridge paid $5.46 billion for the multi-property transaction.

1. The top office lease of the year was the Skadden Arps Slate Meagher & Flom deal at One Manhattan West for 538,321 square feet.