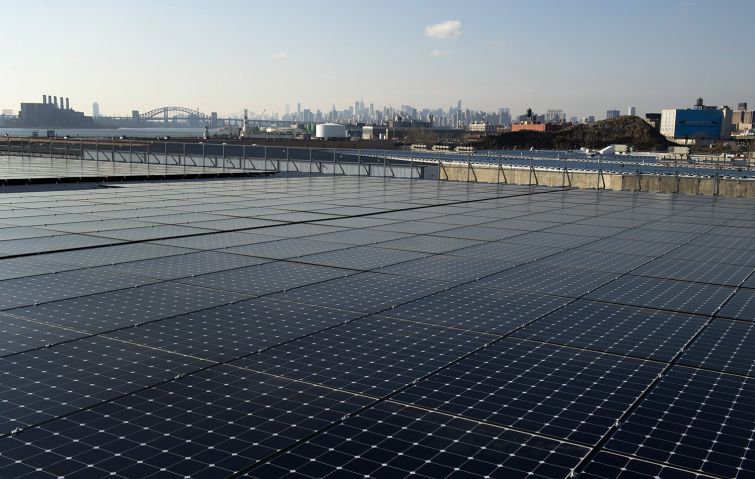 Solar panels will crowd the rooftops at Gateway Elton Street, a mixed-use development now under construction in the Spring Creek section of Brooklyn.

The panels will eventually have the capacity to generate a megawatt of electricity for Gateway’s 659 affordable apartments and 711,855 square feet of retail space.

It will be “the largest solar panel system in New York state,” according to David Kramer, a principal for Hudson Companies, the developer of Gateway. Hudson is underway with construction of the second of the three-phase project.

Solar panels are turning out to be good investments for a growing number of New York City property owners. The prices to buy and install the panels have dropped significantly. Tax breaks and rebates often cover as much as three quarters of the total. However, barriers still keep many property owners from going the way of solar panels, including the challenge of financing and the complexity of utility billing for commercial buildings.

The overwhelming majority of New York City rooftops still don’t have solar panels—but the number of buildings with panels is growing exponentially.

At the start of 2012, the solar panels in New York City had a total capacity to generate 6.4 megawatts of electricity. Just three years later, the city had six times that, with a total solar capacity of 39.4 megawatts, according to New York Sun Initiative, a state program that facilitates use of solar power.

And this is just the beginning. “The city’s goal is to increase our solar power capacity by 250 megawatts over the next 10 years on privately owned properties,” according to the “One City: Built to Last” plan, released in 2014.

Solar panels are just one piece of a larger effort to create buildings that operate more efficiently and burn fewer fossil fuels. Having solar panels can help a building earn a coveted Leadership in Energy and Environmental Design certification from the U.S. Green Building Council. Other green building features range from excellent insulation to energy-efficient lighting.

Solar panels are becoming more attractive for a broader range of buildings, in addition to the usual, idealistic homeowners. The new Whole Foods Market store in the Gowanus neighborhood of Brooklyn opened in 2013 with more than 1,000 solar panels on its parking lot’s carport. Two years earlier, Broadway Stages covered 50,000 square feet of the rooftops of its Greenpoint, Brooklyn sound stages with solar panels.

Solar panels now gleam on the rooftops of five Related-developed affordable apartment buildings in and around New York City. These include two sets with the capacity to produce a total of 50 kilowatts at River Court and Gerard Court, a two-building lower-income rental-housing complex in the Bronx, installed in 2013.

All of this activity is possible because the solar panel purchase and installation costs to landlords are low compared to the value of the electricity the panels produce. Landlords now often earn back the money they spend on the panels in seven years or less.

New York City property owners are now likely to pay roughly $250,000 to purchase and install an array of panels with 50 kilowatts of capacity—a common size to both fit on the rooftop and to power the common areas and elevator at a 50-to-100-unit apartment building, according to solar development firm Bright Power, located in the Financial District.

That cost is consistent with the national average. In 2014, residential photovoltaic systems with the capacity to generate up to 500 kilowatts cost a median $3.90 per watt of capacity to buy and install, according to a 2015 report called “Tracking the Sun,” from the Lawrence Berkeley National Laboratory, a U.S. Department of Energy lab managed by the University of California, Berkeley. That’s down from close to $10 per watt 10 years earlier.

Less than half of that $3.90-per-kilowatt price is the cost of the actual solar panels. About 60 percent of the price represents soft costs like for financing, zoning approval and permits to install the solar panels, according to Sustainable CUNY at the City University of New York. The U.S. Department of Energy has set a goal to squeeze the price even further to $1 per watt, both by reducing soft costs, in addition to the falling price of the actual solar panels. That low price would make solar power attractive to more landlords.

City, state and federal subsidies lower the price landlords have to pay even further. For example, the federal Renewable Energy Tax Credit, which expires in December 2016, provides a tax credit equal to 30 percent of the cost of panels.

Also, most government incentives are in the form of tax breaks that don’t pay instantly, meaning the property owner will need to pay the upfront costs. And nonprofit building owners, like many cooperative apartment buildings, which are exempt from most taxes, won’t have as much use for tax credits unless they are able to sell them to a buyer who has a significant tax liability. Commercial property owners are also billed in a way that might not reward solar power; a big piece of their bill is the building’s “peak usage.”

But developers who are employing solar panels seem content with the results.

“We have been closely monitoring the systems and have been exceeding the savings projections by about 8 percent each year,” said Charlotte Matthews, vice president of sustainability for Related.