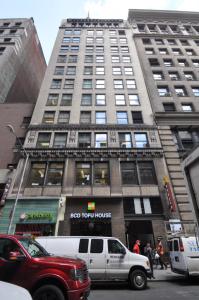 After 10 years of waiting, a handbag manufacturer is returning to its old office building in Midtown South, Commercial Observer has learned.

Sasha Handbags, which makes products for Beverly Hills Polo Club, has inked an 11-year deal for 11,520 square feet at 10 West 33rd Street, according to brokers in the deal. The company’s new space will be on part of the sixth floor of the 12-story building, also known as the Fashion Accessories Center. Asking rent in the deal was $49 per square foot.

The handbag producer won’t have far to move: it currently leases a similarly sized space next door at 20 West 33rd Street between Fifth Avenue and Broadway, according to David Levy of Adams & Co., who represented the landlord in the deal. Mr. Levy’s colleagues Seth Godnick and James Buslik represented the tenant.

Sasha Handbags had leased about 5,600 square feet at 10 West 33rd Street until about a decade ago, Mr. Levy said. Because the company was growing and needed more space than was available at 10 West 33rd Street, it decided to move next door. The accessory company jumped at the chance to get back into the building, he added.

“The company always desired to return to the Fashion Accessory Center due to the like-minded tenants and open-layout showrooms,” Mr. Levy said in an emailed statement. “When an expansive space finally became available, Sasha quickly seized the 11,520-square-foot space and secured the address as their own again.”

Indeed, the building is filled with companies that produce fashion accessories. Straw Studios, a handbag and hat manufacturer that uses natural materials, took 2,850 square feet on the sixth floor, as CO reported in September. Other tenants include Chaby International, ACI Brands and jewelry company Accessories House.