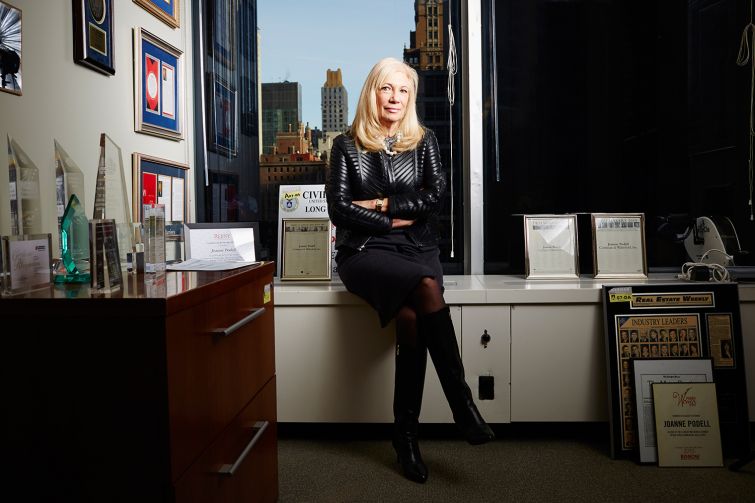 It was about five hours before the Real Estate Board of New York’s annual gala, and Joanne Podell was ensuring the brokers in her charge were equipped.

Ms. Podell, a vice chairman of retail services at Cushman & Wakefield, has a spacious office on the eighth floor at the firm’s world services offices at 1290 Avenue of the Americas between West 51st and West 52nd Streets (just two blocks from the REBNY ball). Her team of six—including a marketing person—is situated in an expansive office next to hers.

She shows the same level of attention and care to her clients, which are half retail tenants like Nike (in select U.S. cities), TD Bank (in Manhattan), Dean & DeLuca (in major metropolitan cities) and Ann Inc. (parent company of Ann Taylor and other brands)—the other half are landlords, including Madison Capital, HSR Corp. (or Heng Sang Realty Corp.), Parkoff Organization and TIAA-CREF (at three buildings).

“I love Joanne,” said Wade Haddad, the senior vice president of real estate for Ann Inc. “I think she does a great job. I love that she’s always looking at things through what’s best for her client. That is always her filter. She doesn’t leave any stone unturned.” The last deal Ms. Podell did for Ann Inc. was an Ann Taylor LOFT at 795 Columbus Avenue at West 98th Street in 2014.

A 22-year industry veteran, Ms. Podell, 69, has worked at C&W for 12 years. The firm named her number one in retail leasing in the U.S. in 2014, and she is slated to be named number one for last year (the winners will not be announced until an internal awards and recognition ceremony in March).

“I have collaborated with Joanne for the past 13 years on both business pursuits and the growth of Cushman & Wakefield retail services into an industry leader,” Gene Spiegelman, a vice chairman and the head of North America retail services for C&W, said in a prepared statement. “Now as the head of North America retail services for the firm [since the end of 2014], I’m thrilled to see Joanne rise to become one of the most talented leaders in the industry and proud that she represents the Cushman & Wakefield brand.”

Ms. Podell has established a solid reputation in the retail business.

“She’s very good at what I would call the pulse of the business—knowing when things are changing or trends are happening,” said David Firestein, a partner at SCG Retail.

Mr. Firestein did a deal with Ms. Podell for Starbucks Coffee at Empire State Realty Trust’s 250 West 57th Street between Broadway and Eighth Avenue. Mr. Firestein represented the tenant and Ms. Podell worked on behalf of ESRT. She is on the company’s short list of brokers it employs.

“Joanne Podell is very well respected in the industry and incredibly well liked among brokers, owners and tenants,” Thomas Durels, the executive vice president and director of leasing and operations for ESRT, said via a spokeswoman. “She has great instincts and tremendous charm that conceals her fierce competitive drive. She has successfully completed major transactions with us including Sephora, Footlocker and Swatch at 112 West 34th Street and Ethan Allen at 1010 Third Avenue.”

Ms. Podell said she has gained market insight by “being interested and listening. I’m not satisfied with myself unless I’m learning.”

She signed her most recent complex deal last April, but was in negotiations for four years. She represented Nike in a lease at 529 Broadway at the corner of Spring Street in Soho. Aurora Capital Associates, Wharton Properties, Thor Equities and A&H Acquisitions nabbed Nike as a tenant for the 52,500-square-foot, under-development, five-story retail space (of which less than 10,000 square feet is on the ground floor). “It wasn’t just negotiating a deal,” Ms. Podell said. “There was a lot of construction because the landlord’s building it out.”

Given how respected Ms. Podell is, and how respected a client roster she’s built up, it is somewhat surprising to hear that real estate was a second career for her.

That bad real estate decision came about when she owned and operated a 10-store furniture business, Brazil Contempo. While she had a knack for picking strategic real estate locations for her shops, she got in over her head as an investor.

She needed a warehouse and bought into a limited partnership that owned one in Long Island City, Queens. As the value of the building increased over time, the partners would refinance it, and before she knew it, her rent increased to $15 per square foot from $7. “It took me down,” she said.

The broker she worked with when finding her furniture spaces was the late Charles Aug. She decided to go into real estate 22 years ago, working at Mr. Aug’s firm, Garrick-Aug Associates, a store leasing company. She then went to New Spectrum, which Newmark Grubb Knight Frank bought. Ms. Podell left for C&W when Bruce Mosler, now the chairman of global brokerage at C&W, recruited her to help build a retail practice at C&W. “I intuitively knew [that] to be a retail broker, I needed infrastructure,” she said, which NGKF couldn’t offer (and still can’t, she said, “with the depth and the commitment to retail specifically.”). That access to resources is in large part why she hasn’t broken off and launched her own business.

But Ms. Podell clearly picked a field that she had a natural instinct for—as have other members of her family. Ms. Podell’s son, Josh, 46, has followed in her footsteps, with his own brokerage, Podell Real Estate Advisors. (The duo has yet to do a deal together.) Her other son Jordan, 44, is flipping houses on his own and son, Jesse, 39, is a managing director at Startupbootcamp FinTech, a global financial services technology accelerator. The two younger sons dwell in New York City, and Josh lives on Long Island.

This makes life convenient for Ms. Podell, a divorcee who rents an apartment in a Glenwood Management building on East 56th Street and Second Avenue. She doesn’t own a Manhattan apartment because, she said, “I could never make the numbers work.” Life for the Bronx native revolves around work, friends and family on the island and golfing at her house in Quogue, N.Y.

One of those friends, Virginia Pittarelli, a principal of Crown Retail Services, an affiliate of Crown Acquisitions, appreciates that she and Ms. Podell share the trait of working 24/7 for their clients. Ms. Pittarelli, whose clients are 90 percent tenants, did an 11,300-square-foot deal for Sephora at the beginning of last year with Ms. Podell at ESRT’s 112 West 34th Street between Avenue of the Americas and Seventh Avenue.

“It’s nice to work with someone who has a lot of integrity,” Ms. Pittarelli said. “Joanne is very smart. She really looks at the big picture. She doesn’t look at business in a tunnel.”

Ms. Pittarelli likes going out to dinner with  Ms. Podell as the discourse is 50 percent business and 50 percent pleasure.

Suzy Reingold, the tristate chief operating officer of C&W before departing in December 2014, said she watched Ms. Podell grow in the game.

“She works harder than anybody I know,” said Ms. Reingold, now a real estate and dispute resolution consultant and personal friend of Ms. Podell. “No customer is too unimportant. She’s excited about what she does. She’s not just doing anything to make a deal.”

If she’s working around the clock as the lone senior member of her team, how does Ms. Podell have time to have a life?

“Did you notice I said I’m single?” Ms. Podell quipped. (She added that she wouldn’t mind dating someone.)

In the meantime, Ms. Podell is excited about a new partnership with C&W’s Steve Birkhold, an executive director in the firm’s office brokerage division. They are creating an Ominchannel team that goes into “the marketplace and services all the needs of a retail tenant,” Mr. Birkhold said of the 20-person team. Mr. Birkhold will act as the sole point of contact and help tenants reevaluate their portfolios.

Mr. Birkhold wanted Ms. Podell on board because of “her obsession with her clients and the way she puts her clients first,” as well as her market knowledge.

This new venture “personifies how I see myself supporting my clients’ needs,” Ms. Podell said.