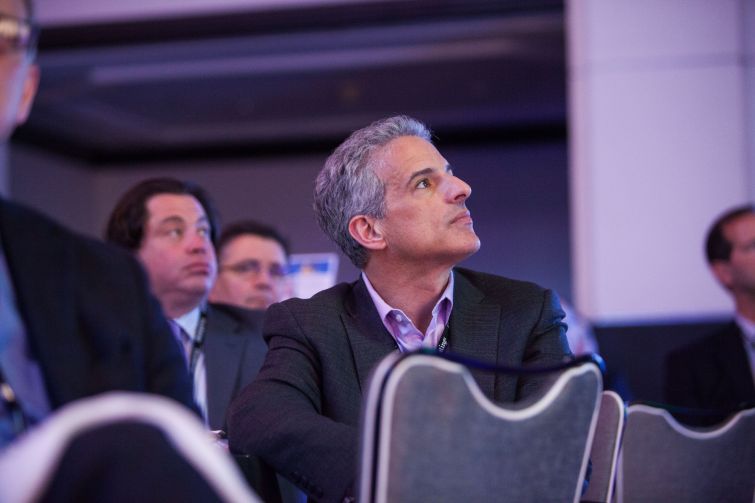 The trade group’s annual three-day event, which bars the media from identifying panelists and moderators without their permission, carried a more urgent tone than in recent years past.

“There is a liquidity issue in front of us in the commercial mortgage-backed securities sector, which is a big challenge for the market,” said Stephen Renna, CREFC’s president and chief executive officer.

Several other industry executives voiced their feelings about the state of the market and the overall sentiment quickly grew cautionary. Pithy forecasts from panelists included “ice is getting thin,” “dangerous curves ahead,” “on the edge” and “less optimistic after this conference.”

“Everyone down here is pessimistic,” said one speaker at a panel on interest rates and credit spreads. “Both the volatility in the market and the global headwinds are enormous.”

Among the layered discussions, several panelists noted that B-piece buyers of commercial mortgage-backed securities—a large and influential class of investors—are increasingly pulling back from the market.

“Liquidity is down significantly for those looking to buy and sell CMBS,” one panelist said, noting that investors “are really tepid” due to uncertainties about yield in the face of new credit risk retention requirements. Major global issuers of CMBS, including Deutsche Bank, Goldman Sachs and Citigroup, are doing deals for less money, that panelist added.

Christina Zausner, vice president of industry and policy analysis at CREFC, said an ongoing slowdown in secondary market transactions is causing market makers, or liquidity providers, to hold smaller inventories. The biggest liquidity concern is that the frictions in the secondary market could start to trickle into the primary market, she noted.

“In a worst case scenario, regulation could go as far as to shut down bank-related market making,” Ms. Zausner told Commercial Observer. “Despite interest from nonbanks in stepping in, it is not yet clear that regulations will let them do that effectively enough to support the market as we know it.

“If regulation gets so onerous that the banks pull out of CMBS, then the question becomes, is there enough economic opportunity for nonbanks to step in and fill that void?” she added.

Still, risk retention and other forms of regulation to come under the Dodd-Frank Act and Basel III will favor the larger CMBS shops, since those institutions have the necessary capital to absorb the added costs of doing business, several panelists agreed.

One veteran at a large international lender said the size of CMBS deals would become increasingly smaller going forward. “People will stay in the business, but they’ll be very careful about how they approach deals in 2016,” that executive said.

“The borrowers are the losers,” the panelist said. “With interest rates on the rise, those private capital sources will become even more expensive.”

That shift, however, could cause the regulators, which include the Federal Reserve and the U.S. Securities and Exchange Commission, to rethink their approach, another panelist suggested.

A speaker in a separate discussion noted that the upcoming risk retention rule, which calls for the issuer of the securitization to hold 5 percent of the fair value of the debt, would allow the industry to better police itself.

CREFC—an association comprised of 312 companies and 9,000 individual members—actively lobbies for the more than $3 trillion commercial real estate finance industry. The organization is working to introduce a new bill in the U.S. House of Representatives that would address and modify certain aspects of the final risk retention rule. Ms. Zausner said she and her colleagues hope to see that effort play out before the federal requirements go into effect.

CREFC has also started to form a coalition with other trade groups and policy institutes to raise additional concerns in Washington over changes to broader risk-based capital requirements.

“It’s a lobbying effort to educate Washington about the potential negative effects of extremely onerous capital treatment for securitizations, and particularly for CMBS,” said Ms. Zausner, a former senior examiner at the Federal Reserve Bank of New York. “We’re turning up the heat slowly.”

In recent years, federal and international regulators have imposed stricter rules on banks, life insurance companies, hedge funds and other financial institutions in an effort to monitor and control systematic risk to the U.S. and global economies and financial markets.

“It’s our Christmas Eve present from the regulators,” Mr. Renna said in jest.