A. Mitti Liebersohn Is Forming a Serious Band of Players at Avison Young 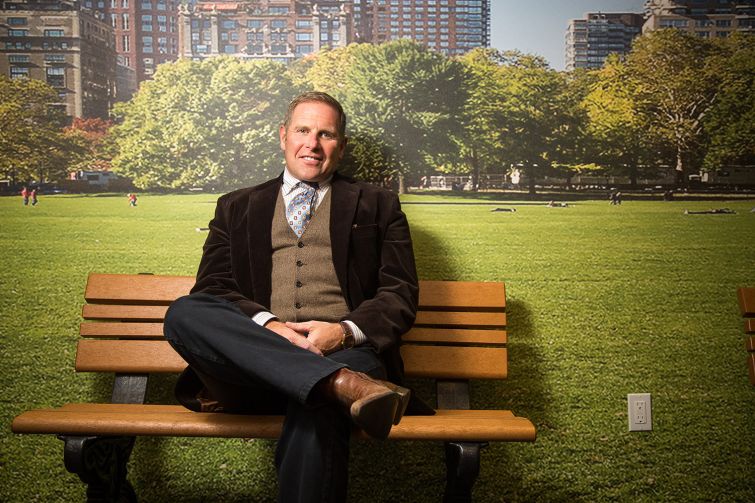 To be good at recruiting, one needs to maintain a vast network, be likable and have a knack for winning people over. Amit Mitti Liebersohn, who left JLL this spring to manage and recruit for Avison Young’s New York office, has all three traits. The proof? In his first eight months at the firm, Mr. Liebersohn, who goes by Mitti, expanded the office to nearly 100 brokers and employees from 75—and he isn’t done yet.

Mr. Liebersohn, 57, embraces new connections like they are long-lost friends. That warmth is one of the qualities he aims to maintain. It is part of the Avison Young New York City president and managing director’s code, which he calls “WARE,” for warmth, appreciation, respect and empathy. It’s a creed he conjured up for himself and has since passed down to his children and now new family at Avison Young.

“He is really a good person. He has got a very strong level of integrity and he is a man of character,” Arthur Mirante, Avison Young’s tristate president who recruited Mr. Liebersohn, told Commercial Observer. “The fact that he coined the acronym [WARE] and used it to help teach his children and help guide them in their development is something special, I think. He is cut from a slightly different cloth than other people.”

He is also a fun guy. Mr. Liebersohn’s office is decorated with numerous signed guitars from legendary musicians like Keith Richards, as well as members of Fleetwood Mac, Cream and Pink Floyd (although Mr. Liebersohn doesn’t actually know how to play the guitar). And he has climbed Mount Kilimanjaro, Mount Rainier and Mont Blanc (probably more feat than fun).

Armed with more than three decades of experience, the Israel native (who moved to Australia at the age of 3 and then bounced around various American states before landing in New York at 13) helped Avison Young win the leasing assignments for two big properties—the 25-story, 177,000-square-foot 211 East 43rd Street owned by Meadow Partners and Tower 45, the 460,000-square-foot building at 120 West 45th Street, the latter which SL Green Realty Corp. sold to Kamber Management for $365 million in July.

“He has got relationships on both the ownership side and the major corporations side and that has already helped us in the building of our brand,” Mr. Mirante said.

Commercial Observer: Starting on the lighter side, how did you get into collecting guitars and albums?

Mr. Liebersohn: I’ve been a music freak forever, for as long as I can remember. For my kid’s 16th birthday, I said, “I gotta do something cool.” He was a U2 fanatic at the time, so I went to an auction and they were auctioning off a U2 guitar. I got it and we put it above his bed. I loved it, and I thought it was so cool. So then I got one on a stand and I got a disease—I just couldn’t stop. Now I’ve got guitars for the top musicians from the 1970s—the top 100 [based on Rolling Stone magazine’s list]—and I’m trying to get all of the top 100. It’ll never happen. But I have about 50 now.

What is your current collection worth in terms of dollars?

I have no idea. Some of them are crazy expensive now. Remember, I’ve been doing this for over 10 years now.

How did you get your start in real estate?

There’s an infamous story. So I was going to school [at Hofstra University] and I really didn’t know what I wanted to do. I was working at a dog store called Puppy Palace in Roosevelt Field Mall in Long Island. I was working there part-time, from 17 to 19 years old. On a Saturday, this guy dressed in rags walked in the puppy store. I’m not joking—he was wearing torn sweatpants, a torn T-shirt, brown socks and black shoes. So I tried to sell him a dog and he left. So I sold the dog to somebody else. He came back after lunch and said, “Where’s my dog?” I said, “You left, and I sold it to somebody else.” He said, “Well, I gotta buy a dog.”

So I spent the afternoon trying to sell him a [Cairn Terrier]. Didn’t think he’d afford it. I was giving him free collars, free leashes, all that stuff. He said he’ll take it. So we went to the cash register and he said, “Can I ask you something? How much of a commission can you make on this?”

He goes, “If you’re gonna sell something, why wouldn’t you sell the thing with the biggest commission? Barring nuclear armaments, that would be commercial real estate.” And as he was telling me the story, a stretch [limousine] comes to pick him and the dog up. He handed me a card and he said, “If you can sell a dog, you are going to work for me.”

Was it Mr. Mirante?

[Laughs] No. It was a guy named Barry Smith and he passed away. He got me into the business. I had no idea what I’d be doing otherwise. He passed away three years after I met him. He founded a [brokerage] called Sutton and Town. Great guy. Unbelievable broker and taught me the business. Subsequently I found out that he’s one of these guys who said, “I don’t wear suits” because people “aren’t hiring me for my suits; they are hiring me for my negotiating expertise.” And they did. He was hugely successful at that time.

How did you come to work with Mitchell Konsker, a current vice president at JLL?

On my 29th birthday, I got a call from Mitch and Bruce [Mosler], and they said, “We’re being backed to start a company. We’ve been following your career.” And they said, “Come on, let’s start a company.” So at 29, we started a company called Riverbank Realty Co. and [Konsker and I] stayed together up until six months ago [at JLL], and we had been together for 28 years.

How did they feel when you left JLL for Avison Young?

They applauded the fact that I had an opportunity to do something like this. This is different than just changing to do brokerage. This is helping build a company. I think they were happy for me.

I get here by around 5 or 5:30 a.m. The job really consists for the most part of three components: recruiting, managing and business development and running deals. So really the morning is to get clear on those components and what needs to be done for each of those components. On any given day, it’s going to be different. On certain days, it’s all about recruiting.

How big is the firm expected to grow?

We’ve got capacity here in New York City to go up to about 150 people. And remember, it’s different service lines. I’ve got investment banking growing, debt and equity growing, our retail group is growing and obviously the office leasing section is growing, as well.

How would you rank your firm?

What I’m finding right now, there’s the big three—there’s JLL, C&W and DTZ, and CBRE. Below that, we are there, Collier’s is there, Newmark is there and Studley is there. I think we’re competing for people, for business. So we’re right there in that next tier under the big three.

Do you think Avison Young could join the top tier?

Ultimately, we’ll have a location in Downtown [Manhattan] catering to Downtown Brooklyn and new markets. But corporately, I don’t think the goal is to become one of the massive [companies]. We’re a privately held company. If you think about it, there is no one left that’s private. Right now, Cushman and DTZ are principal-held, but it’s already stated that they’ll be going public.

What deals has your team done at Avison?

We now have about six leases—anywhere from 30,000 square feet to 70,000 square feet—that are very close to being executed. That’s big. We also won the building assignment for 211 East 43rd Street, which was the first that we got since I’ve been here.

What do you think about all of the consolidation in real estate brokerage?

I think it’s going to be really interesting to see how Cushman—DTZ, Cassidy Turley, etc.—assimilates, and I think that’ll be very telling as to where the future lies with future consolidations. Remember, when I was 29 and formed this company with [Mr.] Mosler, you could do that then because boutique firms were sort of the rage. That was back in 1987. Since 1987, there’s been a lot of consolidation.

Why did Mr. Mirante recruit you to Avison Young?

Well, he had [been the officer manager], but he wanted to go back and focus completely on business development. So my coming over here freed him up. It’s not as if he doesn’t have responsibilities, because he oversees the tristate area. But if this is being taken care of, it frees him up. So he’s got much more time to focus on business development and it’s working. He closed the [Boies, Schiller & Flexner] deal, which got a lot of press moving over to Hudson Yards and he did the NBA Players Association deal [at 1133 Avenue of the Americas]. Hopefully in some way I’ve done what I’m supposed to do, which is free him up to do deals.

I’ll give you an example: I’m here like three weeks and I’m still stressing out, so I’m deep in the computer typing something, and I’m on the phone and multitasking. And suddenly I felt something crawling up my leg, I turned around and [Mr. Mirante] is on all fours grabbing my leg—just to get me relaxed. Who does that? That’s funny. That’s cool.

So you didn’t have any reservations when he reached out and asked you to join Avison Young?

He said to me—you know he’s a really humble guy—“I’ve had the great fortune of assisting some really good people in becoming really good leaders. You’ll be my last.” If Arthur Mirante says that, how do you say “no”? You can’t say “no.” So I am lucky. I really view myself as being one of the luckiest people ever, because I have this and I have him coaching me.

When you left JLL were you able to wrangle some of your colleagues to move over to Avison Young?

Who have you recruited in general so far?

We’ve hired 10 associates and hired [some] really seasoned individuals from the business, all since I joined. We just hired Susan Kahaner, who is a seasoned vet from Cushman & Wakefield and she came over with Jennifer Ogden, who has about five years in the business, but has been a businesswoman for about 15 to 20 years.

How did you recruit the new members of the team?

With over 30 years, you get to know just about everybody. So if I don’t know them, I know somebody who does know them. I also hear who’s really high quality out there and who’s possibly discouraged. The other thing is word has gotten out that the environment here is really unlike any other. Seriously. Unlike any other in the brokerage business.

Seems like it’s not just a mindset, but a company culture.

In the company bylaws, there’s a NAR rule. You know what that stands for?

The No Asshole Rule?

I didn’t have to say it, thank goodness. So that was very consistent with WARE. So if they subscribe to the NAR rule and I subscribe to WARE, you got a good thing going on. So what’s happening is the word is getting out. We have a really good platform. If you have a good platform and good company environment to work in, you’re going to thrive.