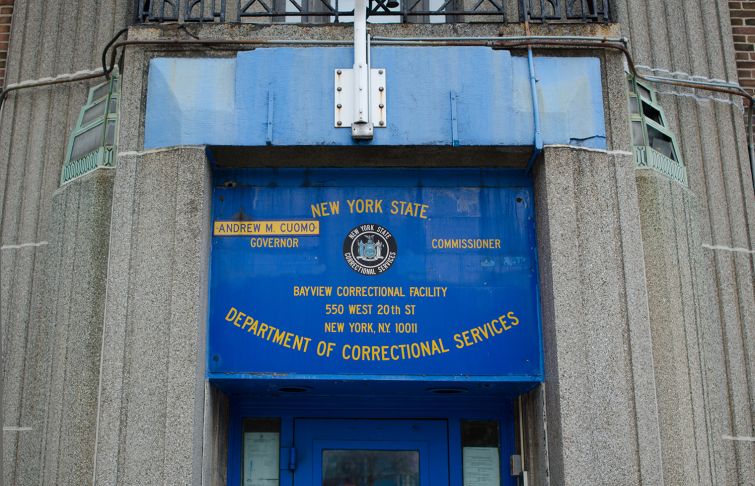 The Bayview Correctional Facility signs will soon be coming down at 550 West 20th Street as the prison becomes a center for nonprofits (Photo: Molly Stromoski/for Commercial Observer). tcullen2015

You could say that 550 West 20th Street is an embodiment of womanhood—and woman hoods.

In the 1930s, when the building was first erected, it was a hotel and a YMCA for sailors whose ships were docked in New York. By the 1960s, it had become a drug rehabilitation facility. But from the 1970s until Superstorm Sandy three years ago, it was a women’s prison.

The story of 550 West 20th Street between 10th and 11th Avenues might not be all that different from the history of most New York City buildings that have stood for generations. The building gets repurposed over and over again. But this time it’s with a feminist twist.

A Buffet family-run nonprofit and a woman-owned development company are changing the course of this 85-year-old building’s history. The team is trying to incorporate women into every step of the redevelopment of The Women’s Building, as it’s now called, from planning consultations, to demolition and even to the sheetrock.

When it’s done, the property formerly known as the Bayview Correctional Facility will be a 100,000-square-foot center for girls’ and women’s rights nonprofits both locally and globally. There will be community uses for the Chelsea area, as well as resurrected features from the building’s days as a YMCA.

“We’re doing something historic,” said Lela Goren, the founder and president of The Goren Group, which is developing the project. “We are just the next chapter of this incredible building. You walk in there and you feel it: it’s a building of pain. The transformation will allow activists and [other]women…to come together in a physical space.”

The goal of the facility is to remove the former cells, originally built as hotel rooms for sailors, and turn the bulk of the facility into office and community space. A boarded up swimming pool with be unearthed and incorporated into a wellness center. A women’s art gallery will be on the ground floor.

“Organizations and leaders that are working on domestic violence in New York City will be able to connect with organizations working on domestic violence globally,” said Pamela Shifman, the executive director of the NoVo Foundation, which is spearheading the project and steering the center’s mission. “It’s really a physical home for girls’ and women’s rights groups in a city that’s already a global hub.”

Phase I of the project recently commenced and involved scoping out the impact and risks tied to the project, the development team said. Female consultants and those from woman-owned businesses have come in to assess the work that has to be done, according to M. Tatiana Eck, a project manager with The Goren Group.

While it’s still too early to determine the overall cost and timeline of the project, Ms. Eck said construction should begin some time next year and should be finished within roughly two years.

A review committee is currently examining the first round of proposals from an international design competition, per the developer. A significant amount of the building’s exterior will be preserved, Ms. Goren said, although one extension of the structure might have to be demolished and rebuilt. The Goren Group has been working with the New York State Historic Preservation Office to preserve the integrity of the building and will receive state and federal tax credits.

“We go through a very intense process similar to the city landmarks process,” Ms. Goren said. “I have several historic sites. There’s an adaptive reuse element. I can tell you that that’s something important to the community.”

And the team behind this project has tried to get only female labor and woman-owned construction companies involved. Because there aren’t many women working as carpenters, Ms. Goren said, the development team is making sure there are at least women somehow involved in construction in such areas as painting, sheetrock installation or taping.

That might be easier said than done given that most jobs are union-run or affiliated. NoVo Foundation and The Goren Group have been working with organized labor to ensure there are female apprentices in the various construction stages. The developer has also contacted women who were formerly incarcerated at the prison about working on the project, with many interested in doing the demolition. When the ex-cons said they wanted to do demolition, Ms. Goren said she told them “they will have the first sledgehammer on the interior.”

Construction is still heavily tilted toward men, especially when you look at the numbers. The construction workforce was 91 percent male in 2013, according to the most recent data from the New York Building Congress. Women on the job are making some headway, however, since men made up 93 percent of the construction labor a year earlier—a 2 percent drop.

It’s a big change from when The Women’s Building opened as a YMCA mostly for men staying in the Big Apple while their ships were in port. From the 1970s until 2012, the building was the Bayview Correctional Facility, a medium-security prison run by the state. The last inmates were removed in the buildup to Superstorm Sandy, during which the structure sustained storm damage. Gov. Andrew Cuomo decommissioned the prison in late 2013 as part of a broader effort to close prisons and sell off some of the system’s real estate.

New York state entered into a 99-year lease with the NoVo Foundation in October. The governor’s office said the deal was valued at $250 million.

“Today we are continuing our efforts to shatter the glass ceiling by taking down an institution of defeat and turning it into opportunity and social reform for women,” Mr. Cuomo said at the Oct. 26 lease announcement. “The Women’s Building is an example of our strength and leadership as the capital of progressivism in this nation—and when other states look to New York, they will see yet another symbol of a community coming together to enhance the future and potential of its people.”

Ms. Goren and the NoVo Foundation, which is run by Peter and Jennifer Buffet (Warren Buffet’s son and daughter-in-law), had been searching for a property for a new center for several years. When the request for proposals was released in November 2013, Ms. Goren said she got the call that the building became available as she was about to give birth to twins.

The quest for a building of this type—housing nonprofits and advancing women’s rights—has been something for which activists have advocated for more than 40 years, said Ms. Shifman. But because getting a project of any type off the ground in New York City is already a difficult task, plans for a women’s office building never materialized. Activists had been “wanting, hoping for, dreaming for a space in New York City, but it hadn’t been possible,” Ms. Shifman said.

That the site was until a few years ago a prison for women makes it more meaningful, the developers said. Ms. Goren said one solitary confinement cell would be preserved on an upper floor. Along with consulting the community on how the facility should look, it has been equally important for the project to factor in the feedback of former prisoners because it’s being transformed from a detention center into a place focused on equality and freedom.

“When we heard that Bayview was going to become available, we knew that this building had to house [it],” Ms. Shifman said. “To be able to turn a place that was about confinement and pain into a place of liberation and equity was a [chance] we [couldn’t] pass up.”