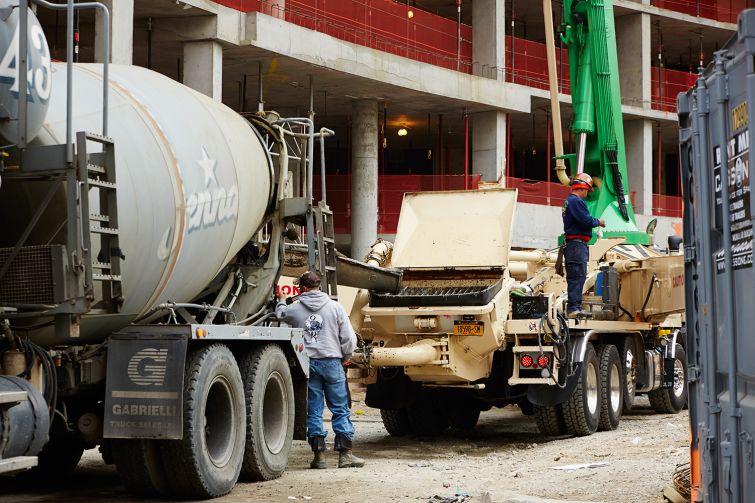 It’s 7:30 a.m. at Frederick Douglass Circle, just above the northwest corner of Central Park. Construction vehicles of all types line West 110th Street, awaiting the green lights to send them to Harlem’s many works-in-progress. A flatbed carrying wood pallets heads west. A pick-up carrying plumbers follows. A spinning concrete mixer—Jenna #43—backs into 2040 Fredrick Douglass Boulevard carrying 11 of the 200 cubic yards, requested for today’s work (concrete is measured by volume—one cubic yard weighs about 4,000 pounds). Trucks #21 and #54 are behind, staggered, each carrying more of the concrete mixed at the batch plant in the Bronx. This parade will continue all day, timed to sync with the pace of the concrete finishers placing the mix.

This is how concrete arrives at building sites all across the city. Jenna Concrete Corp. is, in 2040 Frederick Douglass’s case, the company mixing and delivering these tens of thousands of pounds of concrete to put up, according to their website, a 38-unit apartment building designed by FXFOWLE on what is the last undeveloped corner on Central Park.

It may be tempting to dismiss concrete as a tired old building material but that is decidedly not the case. It remains a vital part of construction, particularly as its versatility increases through use of reinforcing additives. The strength of today’s concrete was unimaginable and impossible just years ago.

“Concrete is an essential material used in construction, in particular for its strength, longevity and beauty, if used as an exposed material,” said Silvian Marcus, the U.S. director of building structures at WSP Parsons Brinckerhoff. The firm worked as structural engineer for 432 Park Avenue, CIM Group’s mega-tall condominium tower, slated to be the second tallest building in the Western hemisphere (the first is the Freedom Tower) which won a New York City Concrete Industry Board (CIB) award last month.

Mr. Marcus said all of the above properties were employed at 432 Park Avenue: strength, elasticity (reducing the dynamic and lateral movements), maximum interior space due to structural element placement (at the exterior’s extremes) and finishes, and the creation of a “white mix” for aesthetics (all exposed concrete), as well as a gray mix for everything else. Both mixes had to be compatible to the design requirements of 14,000 psi—pounds per square inch—strength.

Concrete is measured by compressive strength (psi). To put it in perspective, a sidewalk is 3,200 psi. A bus stop is 4,000 psi. Columns and floors are likely to be 14,000 psi. No matter the project, strength is paramount when it comes to concrete.

432 Park Avenue “was the first time in the world that concrete this strong was made using white cement,” said Joseph J. Ferrara, the vice president and general manager of Ferrara Bros., the official recipient of the CIB’s prestigious Award of Merit. Concrete is naturally gray because it’s the color of cement (see below). This is a special mix. “It is a beautiful final product. SCC—self-consolidating concrete—makes the concrete smooth as glass and stronger than steel.” Ferrara Bros. created and delivered some 70,000 cubic yards of concrete for 432 Park Avenue.

“The challenge was in meeting the strength and allowing it to be pumped vertically to such great distances”—1,397 feet, the height of the building! “We did many tests and trials in our plant until we came up with the optimal mixes,” Mr. Ferrara said.

Unfortunately, the significance of testing and reporting was not always recognized and honored. Readers may recall the scandals at Stallone Testing Labs and Testwell Labs that resulted in criminal indictments in 2009 and 2010. False mix reports, certified by these concrete testing labs, were part of numerous New York City projects. (Negative attention is one of the great albatrosses of the business. The connection between the business and organized crime is one that has dogged it for decades.)

“The concern about integrity in concrete gave the industry a black eye,” said Mr. Ferrara. He’s a member of the CIB, dedicated to improving the quality of the industry since the 1950s when there was talk of “restricting the use of concrete for structural frames of multi-story buildings because of the lack of uniformity in the quality of concrete,” according to a CIB report.

College Point, Queens-based Ferrara Bros. was family-held for 46 years before becoming part of U.S. Concrete this spring. The company supplied concrete for Citi Field and part of the Second Avenue subway and the World Trade Center.

The company, through its subsidiary Aggregate & Concrete Testing, is one of three concrete producers in New York City licensed to design and produce its own mixes. Others must have their mixes designed and approved by one of 45 licensed concrete testing labs.

Mr. Ferrara graciously talked Commercial Observer through the design and manufacturing processes, after clearing up a widespread misunderstanding: “Most people use the words interchangeably—cement and concrete—but cement is a raw ingredient in concrete, like flour in cake.”

Cement is short for Portland cement, a primarily limestone mixture invented in England in the 1800s (named for a local stone). But use of the product dates much further back. “The Colosseum in Rome is made of a crude form, volcanic ash mixed with sand, stone and water, that’s still standing today,” Mr. Ferrara said. “It’s an amazing building material.”

Building with concrete starts with a structural engineer requesting a particular psi with particular properties (like MOE, a.k.a. modulus of elasticity, for that high-floor sway). Three or four mixes are created with blends of sand, stone, cement, water and additives like fly ash, slag and micro-silica ground so fine it can fill the teeniest gaps, enhancing density.

At 432 Park Avenue, fly ash, a coal byproduct, was added to the gray concrete and metakaolin, a clay that also boosts strength, was added to whiten the concrete color.

The lab tests the mixes, using materials from the proposed suppliers (not all sand is created equal), by pouring batches into cylinders to be dried, stored and later—a series of times up to 56 days—subjected to a machine that applies pressure until the cylinder cracks. The break point is used to determine the psi, reported in technical documents.

“Everything is over-designed,” said Mr. Ferrara, meaning created stronger. 432 Park’s concrete tested 16,000 psi and above. “You do not know how strong it is until it gets hard,” he said. “Crystals keep forming and intertwining. It’s incredible to see under a microscope and in time-lapse photography.”

Ferrara Bros. has seven full-time employees conducting quality control tests. The lab is inspected quarterly by the federal government. Like other mix designers, it must use third-party field testers (breaking cylinders on site) to ensure further quality control.

And then it’s all up to the construction crew.

“I can pump it out faster than they want it,” said Michael Matson, a pump operator at Almeida Concrete Pumping. He’s responsible for the timing of the flow of concrete from the mixer to the hopper to the pump through the pipe up the boom to the hose to the finishers. Average speed: two yards per minute, somewhat slower when pouring columns (as opposed to floors).

“If it’s too fast,” Mr. Matson said, “there’s too much pressure and you can get a blow-out.” We watch him monitor the work, signaling by hand from the edge of the unfinished ninth floor to his co-worker on the ground, attending the pump.

Extreme cold or hot or humid temperatures can impact concrete, too (it sets faster in hot weather and more slowly in cold). Mr. Matson et al were on site until midnight last week, working to overcome a series of mini-explosions. Getting it right, every time, every pour, spread, leveling, sealing, is imperative. And not just so the steel frame workers can continue with their work. Columns require extra attention because they need to be complete in one go. Multiple placements result in seams. Seams are weak. Weak is bad.

If there’s concrete on site—and there is about every fourth day here at Frederick Douglass Circle—Mr. Matson is there. The specs of the pump with him (vertical and horizontal reach) depend on where the concrete needs to go. The process is extraordinary, a constant reconfiguring of needs. And timing is critical. A batch of concrete has 90 minutes to go from production to finishing, including traffic. There’s no express lane for concrete mixers.

This is a fact of the material (water evaporates) and also a construction requirement per the American Concrete Institute and American Society for Testing Materials, unless otherwise permitted. Generally speaking, a spokesman for the New York City Department of Buildings (DOB) said, this is only a guide and not an absolute restriction. “If our inspectors are in the field when these limits are exceeded, they usually ask for a few more testing samples to be taken to make sure that the concrete satisfies the engineer’s requirements in their original design,” the spokesman said.

The DOB’s Enforcement Division has a unit devoted specifically to concrete inspections. And a registered Concrete Safety Manager (someone with years of related experience who also took a 30-hour course) is required on major building construction projects that involve the placement of 2,000 cubic yards or more of concrete.