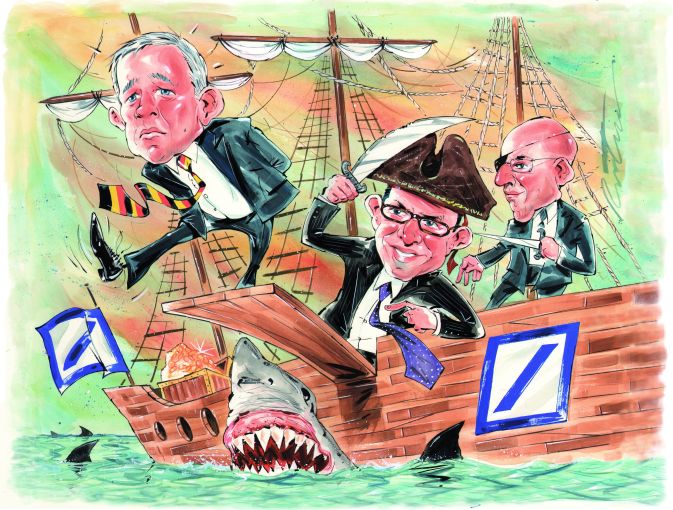 His departure came just days after the joint resignations of the bank’s co-chief executive officers, Anshu Jain and Jurgen Fitschen, who presided over the powerful investment bank for the previous three years, and who, based on the reactions from investors, analysts and employees, were on the brink of steering the company into a ditch.

The Frankfurt, Germany-based financial giant has been losing money hand over fist in recent months, reporting a third-quarter net loss of €6 billion ($6.39 billion). It plans to eliminate paying a dividend to shareholders for two years; sell off major assets, including a majority stake in Germany’s Postbank; and has been forced to hand over billions of dollars to settle charges with regulators in New York, London and even in Russia, from where it plans to withdraw its investment banking business amid a probe into undisclosed money transfers out of the country.

John Cryan, the former UBS finance chief who was named the new co-CEO in June, acknowledged during an October restructuring announcement that the culture at the bank needed serious changes.

“[We are] establishing an organization which is based on delegating responsibility and making people responsible for their behavior,” Mr. Cryan said. “At the same time we will provide them with the support and training to live up to this responsibility.”

The loss of key executives, the perceived lack of accountability and the series of regulatory and legal investigations have taken a toll on the collective psyche of employees at the bank, according to former employees and reports from outside investors.

An annual in-house survey of employees taken in June by Deutsche Bank exposed the extent to which employee morale had been sapped. A report in the German business daily Handelsblatt showed that only 53 percent of the 57,000 employees at Deutsche Bank said they identified with the company, a 9 percent drop from just one year before. That same number had been as high as 72 percent in 2012, when Messrs. Jain and Fitschen began as co-CEOs.

A striking three out of four workers surveyed said they would not recommend that others work at the company, according to the survey.

Former employees and even current senior officials at the bank paint a picture of a management that has seemingly become detached and fails to communicate a consistent message to current employees. There is a view that the firm has one set of rules for upper-level directors, while lower-level employees are held to a higher level of scrutiny. They also state there is a sense that Deutsche Bank is stuck with old ways in everything from technological systems to office procedures and fails to take proactive steps in order to bring state-of-the-art computers or management styles to the company because that would cause too much disruption for certain sectors of the firm.

Even more troubling to the bottom line is the constant stream of murky news coming out of the company. Reports that date as far back as 2012 suggested that Deutsche Bank would sell its Asset Management business to Guggenheim Partners and Bloomberg reported in October on the rampant speculation that the company is selling its private client business to Raymond James Financial. This is causing some clients to hold off on doing business with bank executives until they can get clarity and assurances that they will continue to have those relationships, according to executives familiar with the bank.

“There was a huge morale blow in the bank in the springtime when we settled the Libor case in the U.S. when we were surprised at the amount we had to pay to settle,” Mr. Cryan said at the press conference, referring to one of the bank’s many headaches. “It really hit morale and confidence. I think that morale, although it is not strong, it’s absolutely critical that we get people engaged and we project the right image to our clients because an unhappy bank employee doesn’t make for a very happy relationship with the customer.”

Andrew Babienco, who has 36 years of industry experience, joined BBG as a director, providing appraisal review services for CMBS on behalf of the firm’s financial institutional clients. Helen Peng, who has 28 years of experience, also joined from Deutsche Bank, and will perform similar duties.

In August, The Wall Street Journal reported that Deutsche Bank had terminated two senior executives, Ben Solomon, the head of securitized product sales, as well as Ashish Jain, head of securitized product sales for the Americas, for failing to properly supervise two junior-level employees who were fired for lying to clients over the pricing of commercial mortgage bonds.

Despite those setbacks, the bank is still active in the New York, national and global real estate markets.

“Deutsche Bank has pulled ahead of traditional CMBS shops and is taking advantage of the current lending climate that features low rates and favorable credit standards,” said Sean Barrie, an analyst at Trepp. “[It’s] on a trajectory of continued growth into 2016 thanks to a diverse portfolio of issuance. With the Fed remaining noncommittal to raising interest rates, Deutsche Bank appears to be entrenched in the CMBS lending pole position for the foreseeable future.”

Much of the credit for holding down the fort in that department can be laid at the feet of Matt Borstein, who left Eastdil Secured to join Deutsche Bank in 2010 and was named head of commercial real estate for North America in February 2015.

“Matt’s leadership within the structured finance business has been a significant factor in Deutsche Bank’s four-year run as the global top-issuer of CMBS,” said one official familiar with the department.

Deutsche Bank was the sole bookrunner and lead manager on a $1.34 billion acquisition loan for Callahan Capital Properties and Ivanhoé Cambridge at 3 Bryant Park, which sources familiar with the deal said was the largest single asset financing in the history of New York that was sole-managed.

A leading commercial loan broker said he has not seen any change in the marketplace activity that is unique to Deutsche Bank and, if anything, he attributes the change to a general pullback.

“I think they’ve been pretty prudent,” that source told Commercial Observer. “They’ve done smart deals. The pricing widened out a little bit. There’s nothing really that’s concerning to me.”

Whether there is any pullback industry-wide or specific to Deutsche Bank, the picture emerging of the previously undisputed leader of the investment banking world is that of a ship that is leaking—losing talent, losing morale, losing its global reputation for integrity and, among some investors, losing trust and belief that a plan is in place to turn things around.

Just in the past year, Deutsche Bank has been the subject of several civil and criminal investigations at the federal and state level in the U.S., as well as some very high-profile investigations overseas. The sums of money being set aside to fight legal battles, the amount paid in fines and the damage to the bank’s standing around the world has been formidable.

The Department of Justice, which has been hunting down banks where clients have been parking money in Switzerland to avoid taxes, likewise went after Deutsche Bank. On Nov. 24, the DOJ announced a resolution under which Deutsche Bank (Suisse) SA will pay no more than $31 million in penalties as part of a program where Swiss banks can declare possible tax-related offenses for U.S. account holders.

The resolution requires the bank to cooperate in any criminal investigation and disclose any cross-border transactions. The bank had 1,072 accounts worth up to $7.65 billion. This marks the 57th agreement between the DOJ and individual banks.

“Deutsche Bank (Suisse) SA fully cooperated with the Department of Justice and is pleased to have reached an agreement that resolves this Swiss affiliate’s legacy tax-related issues under the Swiss Bank Program,” a spokeswoman for Deutsche Bank told CO—however, the bank declined to comment about the other issues afflicting Deutsche Bank.

Earlier this month, Deutsche Bank agreed to pay $258 million and fire six employees to settle charges by New York state and U.S. regulators that it facilitated more than $10.8 billion in transactions with countries that were officially sanctioned by the federal government, including Iran, Libya, Syria and Sudan. The New York Times reported that despite the settlement and an agreement to hire an independent monitor, the U.S. Attorney’s Office for the Southern District of New York and the Manhattan district attorney’s office continued a criminal investigation.

In April, the New York State Department of Financial Services announced a $2.5 billion penalty lodged against Deutsche Bank in connection with allegations that between 2005 and 2009 employees at the bank manipulated benchmark interest rates, including the London Interbank Offered Rate and similar rates in Europe and Japan (the Libor scandal alluded to by Mr. Cryan in his press conference). Benjamin Lawsky, the superintendent of financial services, said the deal also resulted in the termination and banishment of several Deutsche Bank employees, who engaged in the activities for personal gain, officials said, and the installation of an independent monitor.

A spokesman for New York State Attorney General Eric Schneiderman said he could not comment on any pending cases.

Meanwhile, Shivani Mathur, who was the London-based global head of economic resources for Deutsche Bank and was implicated in the Libor-rigging case, recently filed a discrimination suit against the lender alleging sex discrimination.

In 2014, William Broeksmit, a retired Deutsche Bank executive involved with managing risk and with close career ties to Anshu Jain, was found dead of an apparent suicide at his London home amid reports that he was increasingly concerned about government investigations into the company.

Deutsche Bank officials are promising a series of changes to not only make the bank more modern and efficient, but to mitigate the company’s increasing association with corporate corruption and slack ethics.

Among the planned changes, there will be 9,000 full-time jobs cut worldwide and the bank plans to exit some parts of the world that are no longer considered essential to its business. The bank has not released specific details about the cuts, but about 4,000 are expected within its home base of Germany. Branch offices will be closed as part of that process.

There are also plans to change the compensation model at the bank to more closely align with the bottom line, and not just base it on how much revenue is generated. In a nod to the cultural reform efforts taking place within the bank, there will be more emphasis placed on employee “behavior and attitude” as part of the compensation process, as Mr. Cryan said.

In a Nov. 2 note to investors, Barclays analyst Jeremy Sigee wrote that the restructuring plan involves adjustments to various parts of the bank, but represents a good first step.

“The plan involves more subtle changes to the capital markets activities than had been expected, with fine detail cuts and tweaks rather than sweeping change,” Mr. Sigee wrote. “The hope is that re-engineering can make the machine more powerful.”