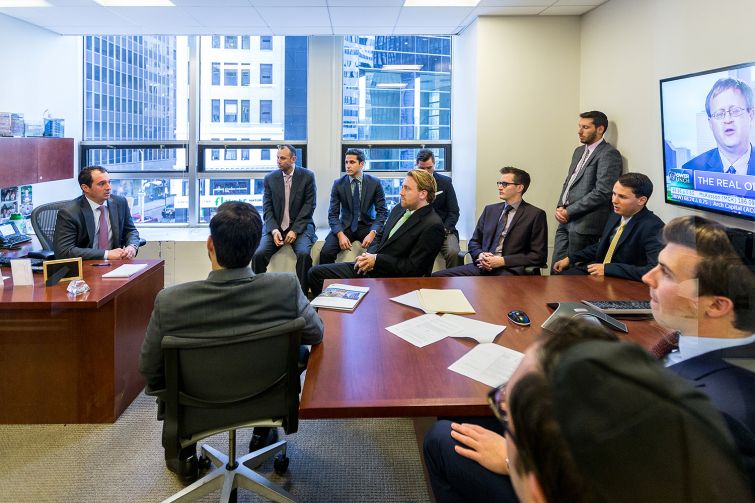 Brian Flax, left, and a team of his associates (Photo Courtesy: Meridian). dghigliotty

One apt example: a mixed group of relatively inexperienced commercial mortgage brokers have become a growing source of relationships and revenue within the country’s most active debt brokerage firm.

In March 2013, New York-based Meridian Capital Group launched a talent incubator program for those fresh to the business, following the likes of international corporate giants such as Microsoft and Coca-Cola.

The program, led by 34-year-old Managing Director Brian Flax, has since trained 16 in-house associates who have negotiated more than $585 million on behalf of clients, with another $170 million in the pipeline. The young associates brought on board so far include a former professional basketball player from Israel, an architecture student and a trained investment sales broker, as well as former employees from Barclays and Citigroup.

As a result, none of the incoming brokers who successfully completed had commercial mortgage experience prior to doing so. But with support from more seasoned employees at the firm, who specialize in commercial mortgage-backed securities, government-sponsored enterprise deals and other specific areas of the business, the program allows the new entrants to tap those senior managers for advice and potential collaborations.

In turn, those with skills outside of the firm’s core strengths have helped inspire new ways of approaching deals at the nearly 25-year-old brokerage, which launched an investment sales division earlier this year.

The incoming trainees managed by Mr. Flax receive a base salary in addition to commissions for their time and efforts, according to Meridian. The program ranges between one and three years, depending on how quickly the newcomers learn the ropes.

“Graduates” and current associates of the first three classes, which include the young brokers Aggelos Sklavenitis, David Oheb and Bryan Geffen, have helped close a $105 million construction loan for a ground-up multifamily project in Midtown Manhattan on behalf of the Torkian Group and a $29 million loan for a condominium conversion project in Chelsea, among other deals.

While the talent program has experienced inevitable rotation (roughly 70 percent of the trainees remain with the firm full-time), those who have gone onto other companies and industries were able to try their hand at brokering commercial loans and bring that experience with them, Mr. Flax said.

“While some attrition is inevitable in such a fast-paced and competitive business, the firm is pleased that 70 percent of the originators hired through this program remain with it today and are actively contributing to its growth and future,” he told Commercial Observer.

The Dix Hills, N.Y. native, who joined Meridian in 2012, had previously worked as senior vice president of operations and chief marketing officer at Newtek Business Services, a publicly traded business solutions firm. The managing director of the talent program is now in the process of recruiting his fourth class, which will include seven to 10 associates selected from hundreds of applicants, according to the firm.

“Studies have shown that there is no science to accurately evaluating who will be successful in sales,” Mr. Flax said. “We are looking for dynamic individuals with a passion for real estate, along with tenacity, competitiveness and ambition. Ultimately, we are seeking people who want to work for a market leader in an exciting industry, who will push themselves every day to excel.”