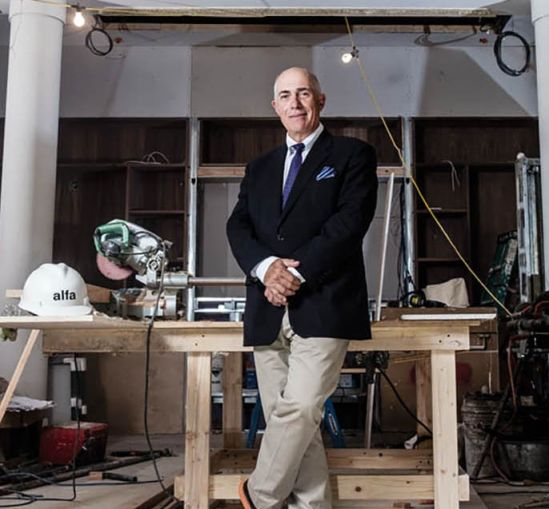 Many artists conceal changes to their work. Process is not always appreciated, and can be misconstrued as flaw. The appearance of an early layer—whether imperfectly erased or deliberate—is called pentimento (see Hellman, Lillian) and some artists hate it. Others revel in the study of development, the steps taken from beginning to end. Michael Namer, the chief executive officer and founder of Alfa Development Group, is among the latter.

Istanbul-born, Havana-escaped, Los Angeles-raised, New York-formed, the 61-year-old West Village resident is today, in his words, a painter by avocation, a developer-builder by vocation. Each layer of his life, his work, his building is as integral as the next.

We’re sitting in a muted model guest room on the seventh floor of the HGU New York, formerly known as the Grand Union Hotel. At 34 East 32nd Street in Manhattan, which should be ready for guests sometime in 2016. Earthy grays, blues and khakis inside deliberately negate the flashing brightness of the city. Mr. Namer, in navy sports coat and tie, stretches his khaki-clad legs, flashing the bright orange soles of his brown suede wingtips.

With seemingly little effort he’s inserted himself in every aspect of his current project. He draws himself in, deriving pleasure from everyone and everything around. On the 10th floor, the top, he found newspapers stuffed into the plaster spread during the 1915 expansion of the 1905 original building. Slowly, he extracted the pages from the wall.

“I’ll show you downstairs,” he said, delighted, describing Vanderbilt headlines and local postcards and art that will fill the 40,000-square-foot hotel, reminding or teaching guests that this place, like the city around it, is rich with history, culture and life. Mr. Namer hopes guests of the hotel and the not-yet-named, recognizable-chef-headed restaurant will be aware of their surroundings. This is New York and nowhere else.

In the early 20th century, dozens of hotels and apartment hotels (less regulated, more financial return) opened in the middle of Midtown. More than a century later they’re back. Revived. The budget and hour-long room rentals that dominated in years past are out. And developers like Alfa Development—perhaps best known for the residential, eco-friendly Village Green (311 East 11th Street) and Chelsea Green (151 West 21st Street)—are buying in.

In November 2012, Alfa purchased 34 East 32nd Street from Fred Sztul, who had owned and operated the hotel since 1976, for $28.6 million. A month earlier Assa Properties won 62 Madison Avenue at 27th Street, the former Madison Hotel, née the Brayton, for $28.5 million at a foreclosure auction—attesting to the interest that hoteliers have in the area. (Joseph ben Moha and Ben Zion Suky purchased the hotel for $32 million in 2008 and spent $7 million in renovations). Seven months earlier, The NoMad Hotel and its restaurant at 170 Broadway at 28th Street opened for business, to immediate success.

Mr. Namer’s real estate story starts in Westhampton Beach where, as a 22-year-old college graduate, he bought a tax-foreclosed oceanfront property with a $12,000 loan from his dad and $45,000 from the bank, developed it with a house designed with an architect friend and rented it for $25,000.

“Wow, this is great business. I like this,” he said, mimicking his younger self. “It really fulfilled all the things I like to do. I’m an artist by education. Fine arts. And business psychology also. I use those two things every day, by the way.”

Business psychology means, roughly, operations—from HR to flow of transactions and services. It means efficiency, the opposite of artistry—or perhaps its complement. Balance (see muted-flashing, above) and thoughtfulness are apparent in every element of Mr. Namer’s life.

“I really enjoyed the whole concept of that [first] house because I was always looking at design, seeing how other people were doing things. A lot of what I learned was through my own observations. Then I started reading books about architecture and architects.”

He read books like Five Architects: Eisenman, Graves, Gwathmey, Hejduk, Meier (“A quintessential book about the new, up and coming architects of international style,” he said. “All these guys were very cool, bringing back Corbusier, basically.”). He shared it with his cousin Alberto Kalach when they lived together in Mexico. Mr. Kalach, now famed for his civic and residential designs, was an architecture student at the time.

“That’s where I got my Ph.D. in everything,” said Mr. Namer of the two years after building that first Westhampton property (loosely modeled after Charles Gwathmey’s Amagansett house). His dad sent him down to work in his new woven polypropylene fabric factory. “It’s crazy. The person who was supposed to be in charge was sent to sales. I was 23. So now I’m running a business with 200 people, trying to figure out the science of what I’m doing.”

These are the psychology lessons talking. Mr. Namer’s training included three years of work at an outpatient clinic, offering recreational (swimming, volleyball) and music (guitar, singing) therapy for men. It was like One Flew Over the Cuckoo’s Nest, he said. “Really. It was tough to see how these minds deteriorated.” It was the realization that he could become too emotionally attached that deterred Mr. Namer from a career in clinical psychology. His wife, coincidentally, is a neuropsychologist. She does God’s work while he does construction work, he said.

“The wonderful thing about my family,” said Mr. Namer in response to a suggestion that he was selling himself a bit short in the do-good department, “I guess through osmosis, is they both became very philanthropic.” His sons are currently in Burma. One is making a documentary about a project the other helped create through an NGO: schools on buses, offering education to children who are indentured servants at teashops. “I’m blessed to have people like that in my family,” Mr. Namer said. “It keeps us grounded at all times.”

Grounding that led to decisions like all-sustainable practices. “I realized that 40 percent of all greenhouse gases come from buildings. So I said, we need to start making sustainable buildings. And we got the first LEED Gold certification for a residential building in Manhattan.”

Something inconceivable 35 years earlier when he returned to New York from Mexico and convinced his dad to focus on real estate, letting the commodities business and its harried travel schedule go. His dad had developed 18 buildings in the south of France with a cousin in the 1970s as an investor. Alfa was established in 1980. Later Mr. Namer’s brother joined the firm and the development side officially launched.

Construction at HGU New York began in March 2015 with a goal of completion by year’s end. Outside the guest room door, drills are buzzing. This isn’t Alfa’s first foray into hospitality.

Inspired by Jeffrey Chodorow and Ian Schrager, “the pioneers of the boutique hotel business,” Mr. Namer approached his partner Gary Spindler, who owns a number of parking lots (Park-It Management). You can build hotels in commercial districts, he said.  So they made plans and got permits for an eight-story hotel at 197-199 Mott Street, but struggled with financing. “We could get financing for condominiums, because we’re condominium guys and we have a good reputation for that, but hotel financing was really difficult.”

It was 2011. Lending risk was conservative. Hotels are risky, even if you have industry veterans like Klaus Ortleib, Ian Schrager’s Mondrian Hotels general manager and independent hotelier, on your management team. “And then the market shot up. We said ‘screw this’ and went back to condominiums.” Today, all but one of the 11 units have sold, averaging $2,600 to $2,700 per square foot.

“By the time we finished this building we sold it for a lot of money,” he said. “We were lucky. We were able to catch the market at the right time and bought five projects and they’re all coming to fruition.”

The sales of the 12 units at ultra-luxe 151 Wooster Street were key to acquiring HGU New York. “We still had the retail space there and the guys from Thor came and made us an offer we couldn’t refuse. We sold it and we did a 1031 [tax-free exchange] and by luck this hotel was available.”

Luck and a heap of cash. Alfa paid more than 80 percent in cash. The secret to hospitality financing is being flush. And it doesn’t hurt operations in a risky industry. Mr. Namer noted the lower risk in hotels (compared to restaurants) because of the ability to raise rates. They have not yet been set for the 90 rooms at HGU New York but may start around $299.

That sounds cheap when you consider the $14.5 million in construction costs, including preserving historic layers, like original plaster details on the first floor ceiling. Architect Peter Guzy (Blue Hill’s designer) is tasked with incorporating the old and the new.

“History, architecture and sustainability on a human scale, that’s our motto,” said Mr. Namer whose phone is unexpectedly playing a Miles Davis video while we set up the photo shoot in the controlled chaos of the sawdusty first floor. Under a hard hat, he shows off renderings. Girlfriends of the Rolling Stones, paintings by Liz Markus, will hang in the comfortable lounge. They were exhibited this summer at Mr. Namer’s Gallery 151 at 132 West 18th Street. Photography by Sebastian Piras will also be displayed throughout the hotel. And one of Robert Weingarten’s Pentimento Series, too. The patina of images, the revealing of layers, the record of a work’s evolution, intrigues Mr. Namer.

We know where he’s building next: Gramercy Park. Mr. Namer recently purchased a parcel there at 257-261 Third Avenue for $70 million. The what is still on the drawing board.

UPDATE: An earlier version of this story referred to HGU New York by its previous name, Grand Union Hotel.