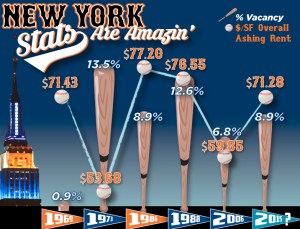 Since 1962, the New York Mets have been the baseball alternative to the powerhouse New York Yankees. But every so often—six times to be exact—the lovable “Metsies” steal the hearts of New York sports fans. With only the sixth National League East championship for the Mets, I wonder if there is a correlation to the team’s success to the office market.

1969 – The “Miracle” Mets clinched the pennant after winning 100 games in the regular season, and went on to win its first World Series. In 1969, the Manhattan office market was at a peak for the decade with an overall vacancy rate of less than 1 percent. Overall average asking rents topped out at $71.43 per square foot.

1973 – A rallying cry of “You Gotta Believe!” propelled the Mets from 12 games out of first place in August to its second division championship. In 1973, the office market was in a down cycle, having a then record-high vacancy rate of 13.5 percent. Manhattan asking rents dropped 24.9 percent since the last time the Mets won the pennant to $53.68 per square foot.

1986 – The team’s brashness was backed up by its talent, which led to 108 wins in the regular season, and its second World Series. In 1986, the vacancy rate in Manhattan was on the rise to 8.9 percent from a low of 3.1 percent in 1980. The change in the market was not softening one, but rather a market in a significant development cycle, as 35 million square feet of new construction was built.

1988 – The Mets won the division with another 100-victory season, but lost to the Los Angeles Dodgers in the NLCS. The office market continued to slide as the vacancy rate jumped 370 basis points in two years to 12.6 percent. Despite the increase, overall asking rents dropped only $0.64 per square foot over two years to $76.55.

2006 – The Mets won the division for the first time in 18 years (they got to the World Series in 2000 by winning the wild card) and I was there for a 4-0 victory over the Marlins. Unfortunately, the team’s luck ran out in game seven of the NLCS. Luckily for the office market, it was a good year, as the vacancy rate reached its lowest level in six years at 6.7 percent.

2015 – The Amazin’ Mets are back in the playoffs and its young pitching staff is primed for greatness. A solid office market with an 8.9 percent vacancy rate continues to improve each passing month. When all is said and done, maybe this year will be a successful one for both the Mets and the office market like in 1969 and 1986.