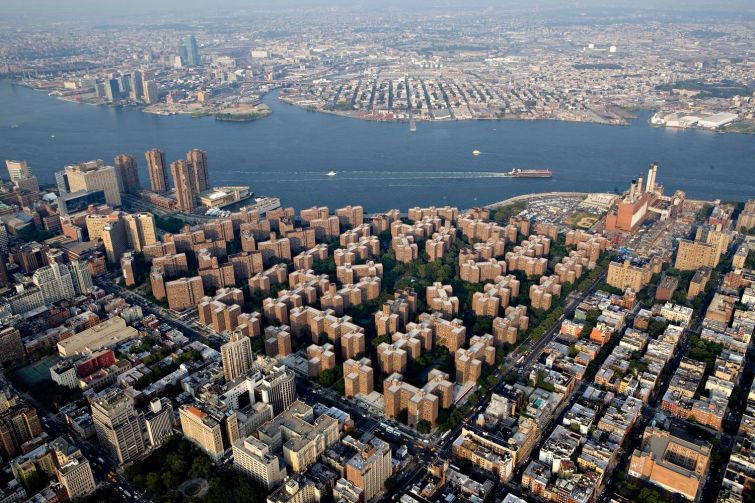 The saga surrounding Stuyvesant Town-Peter Cooper Village on Manhattan’s East Side is nearing an end. New York-based CWCapital Asset Management is readying the sprawling apartment complex for sale in what could be one of the largest single-asset real estate buys in U.S. history.

Global private equity giant Blackstone Group is one of the potential suitors for the complex, according to Bloomberg. The Fortress Investment Group-owned CWCapital, the special servicer on the complexes’ debt, took over the properties last year—following a messy legal battle over ownership—and is looking to fetch $5 billion to $6 billion for the two side-by-side communities comprising 56 buildings.

Should Blackstone become the buyer, it would significantly bump up the firm’s holdings in the Big Apple. Blackstone currently ranks 10th in CoStar’s list of commercial landlords with rentable building area totaling 8.8 million square feet. That’s right behind Boston Properties, which has nearly 9 million square feet throughout the city.

The purchase would put Blackstone among the top of CoStar’s list of landlords with gross building area, which typically includes residential properties. Stuy Town and Peter Cooper Village have a combined 11,233 units with an average unit size of 932 square feet. Together, the properties make up 12 million square feet of gross buildable area. The acquisition would put Blackstone second on the list, well above all residential landlords except the City of New York—which has almost 50 million square feet.

Jonathan Gray, Blackstone’s head of real estate, told Bloomberg earlier this month that the company was diving deep into Manhattan’s rental market. City residents are trending more toward renting as the cost of buying in New York continues to escalate, Mr. Gray said.

The comments came a month after Blackstone and partner Fairstead Capital paid $690 million for 24 Manhattan rental buildings containing 1,000 apartment units. On an international basis, Blackstone raised a record $15.8 billion for its global real estate fund, the company announced earlier this month. The firm is also planning for more investment in Europe, according to Bloomberg.

Doug Harmon of Eastdil Secured has been tapped to market Stuy Town and Peter Cooper Village. Mr. Harmon deferred to a spokesman for CWCapital.

The complex is also expected to change hands for more than the $5.4 billion Tishman Speyer and BlackRock paid MetLife for the communities in 2006, marking the largest real estate transaction in the country, according to Bloomberg.

That deal caused a lot of public fury over rising housing costs and the reduction of middle-class apartments in the city and led to a group of tenants unsuccessfully trying to disrupt the sale before its deadline.

“I remember waking up every day wondering what the headlines would be,” Robert Merck, the head of MetLife’s real estate debt and equity businesses, told Commercial Observer in a sit-down interview in November 2013.

Problems didn’t resolve once the ink dried on the sale: the subsequent years of ownership were among the biggest real estate blunders of all time.

Tishman Speyer and BlackRock walked away from the debt on the properties in 2010. That followed years of attempts at deregulating rent-stabilized apartments at the two complexes. Tenants successfully sued Tishman Speyer in 2009, arguing that rents had wrongfully been raised while the landlord made use of the J-51 tax break. Following the lawsuit, Tishman Speyer was expected to divvy out $200 million to residents of about 3,000 apartments of the complexes’ 11,200 units, as The New York Times reported.

Reserve funds started to dry up and the landlords were no longer able to pay the bills. The owner was forced to default on the debt, effectively handing over the keys to Stuy Town and Peter Cooper Village to its lenders, which included Pershing Square Capital Management, Winthrop Realty Trust, Bank of America, Fannie Mae and Freddie Mac, as CO reported last year. A messy legal battle between the lenders ensued. CWCapital used a deed-in-lieu-of-foreclosure in July 2014 to gain control of the complexes, which it had planned to put up for sale.

“We are pleased that we have finalized in principle the settlement of the outstanding litigation,” a CWCapital spokesman said in a statement.

Update: This story was edited to include a comment from CWCapital.