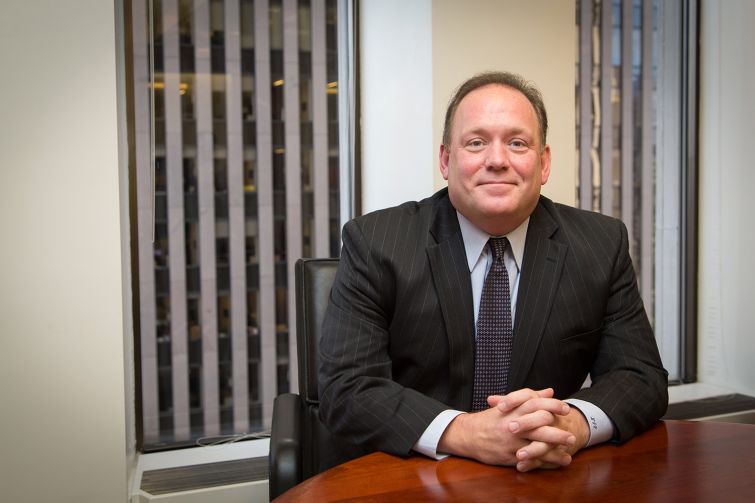 Nearly two decades ago, Noel Purcell made the decision to leave a local New York bank to work for a Japanese giant, Mizuho Financial Group. Mr. Purcell, 49, made the switch because he wanted to work on a more “global” stage. Nearly two decades later the Bronx-born executive heads real estate and specialized finance for the company’s retail and corporate banking unit, Mizuho Bank, with a focus on providing financing to some of the top real estate investment trusts, or REITs, around the globe. In a recent phone interview, Mr. Purcell talked to Commercial Observer about everything from Mizuho’s headline $3 billion purchase of North American loans from the beleaguered Royal Bank of Scotland to the weakening yen to his role as a co-head of the unsecured creditors committee in the Lehman Brothers bankruptcy case.

Mr. Purcell: I was born in the Bronx and I was there until about 7 years old before I moved to Deer Park, Long Island. I stayed in Deer Park until I graduated Hofstra University. And then from there, after getting married, I lived in Commack, Long Island, and then I moved up to Northport [Long Island]. That’s where I am now in East Northport.

How did you start your career in finance?

KeyBank is where I started my career on Long Island back in March of 1989, I believe. I am really getting old. I was there for about three and a half to four years and it was really a first job out of college, basically learning everything you need to learn from a credit perspective. It was mostly middle-market companies and real estate companies that we worked on there. So you learned every aspect of how these smaller businesses work. And it was with a lot of developers on Long Island and developers in New York.

How did you get started into the real estate lending business?

At KeyBank I worked for several groups within the area. One of them was middle-market lending. The other one was a real estate group led by a gentleman by the name of James Campagno, who was the head of their real estate for the region. Jim had come from Bank of New York over to KeyBank at that time. And after a number of years at KeyBank, he left to go back and take his position at Bank of New York in their Garden City office. He asked me to come over and help him run the team.

Why and how did you join Mizuho?

I felt that at Bank of New York they were more focused on lending to their long-standing relationships, specifically with national developers that were doing deals in New York. And I had done that enough at that point that I felt if I was going to be anything of substance—in my mind—in the world of lending, I needed to do something more global. So the opportunity arose and I came in and interviewed with a number of senior Japanese executives at Mizuho in 1997.

What does your role as Mizuho’s head of real estate and specialized finance entail?

It really covers three main areas and then within real estate, three main areas. One is real estate lending, which is primarily focused out of New York, but also includes some Canadian operations, as well. It also includes being the head of what we call here restructuring or troubled credits, and that’s for the corporate side of the bank. And then the final thing is I’m also the chief community reinvestment act lending officer for the bank as part of its reinvestment act lending activities.

What asset classes does your team focus on?

On the REIT side of the business, we really focus across the board on all major asset classes. So you are talking about industrial warehouse facilities, multifamily, office, retail, healthcare and public storage—really all the major asset classes that the major U.S. and global REITs would be looking at.

Do you do a lot of hotel deals?

Who are your other core clients?

It’s different, of course, for the different products, but certainly on the REIT side of the business we have companies such as Simon Property Group, Vornado, Regency Centers, Health Care REIT, Kimco, Prologis and Alexandria Real Estate Equities.

We’ve got 20 to 22 core clients in the REIT world. We’ll build upon that, but we’ll only build upon it if we think there is a symbiotic relationship. We certainly want to be as many things to our clients as we can be, other than just writing a check. We want to be able to provide market intelligence, industry intelligence and other ideas to companies and we want to make sure the companies feel that’s something they want from us and that’s something they are looking for.

What is an interesting deal your team closed in the past year?

There are a number of them, because we were extremely active last year. We added $3 [billion] to $4 billion worth of exposure, so when you add that much in one year, you’re obviously being pretty active. A lot of planes, trains and automobiles in visiting folks. But I would tell you that a couple of them probably revolved around the work we did with Prologis. We were one of the first banks to give them seven-year yen term loans. The maturity date for those term loans being seven years. It’s very unusual.

How does working for a Japanese firm differ from that of a U.S. one?

It’s been a long time since I’ve worked for a U.S. institution. So I don’t know if I can speak to what it’s like to work for a U.S. organization directly.

What’s your favorite aspect to working in a Japanese company?

They have sat and listened to me. I have worked through a business plan for 18 years and they have been patient about what they’ve wanted. They spend time to think about what it is you are saying and why it is you are saying it, and whether you’ve thought about it and thought it through. When you get a patient, kind, supportive group working in your business, that’s a pretty special thing.

Can you speak Japanese?

No. I’m blessed with having a lot of colleagues around me who are bilingual. My Japanese colleagues are fabulous at speaking English. I think that’s a big change that’s happened over the last 20 years.

With a weaker yen, how does that affect Mizuho’s lending strategy?

At the end of the day, I think the bank has made its commitment clear about what it’s going to do in the U.S. The acquisition of the Royal Bank of Scotland’s North American corporate loan portfolio together with 150 bankers in debt capital markets, equity capital markets, FX trading and a number of other key areas was a strong sign of Mizuho’s commitment to this market. The bank, regardless of the fluctuations of where the yen is to the dollar, has been absolutely clear about our dedication to the United States. When you take a portfolio that, pre-RBS acquisition, was about $35 billion to $40 billion and you nearly double it in one acquisition, I think you are making a pretty clear statement that you are here to stay and compete.

What was your role when you worked on the Lehman Brothers bankruptcy case in 2011?

What was the biggest thing that you took away from it?

I’m telling you, there are people who called me after I accepted the co-chair position and said “You’re going to retire working on Lehman Brothers.”

Well, there are still some things going on in court, because some things still need to be done. But the vast majority of that bankruptcy was put together at much better returns than anybody could have predicted at the time and I think the judge said it best. I’m not going to paraphrase him, but he felt that we did a very good job for what we were doing. So I walked away from that proud.

Which markets around the world are most attractive to you right now?

I think Europe is on its way to the kind of recovery that everybody wants to see. We are all hopeful that Greece can find a way to be a little more stable going forward, which is going to help obviously the European Union and others there to focus on business.

I think Africa—North Africa—and certain areas in Latin America and South America have been underserved and they need to be looked at.