Bank of China and Deutsche Bank to Lead $1.5B Hudson Yards Construction Loan 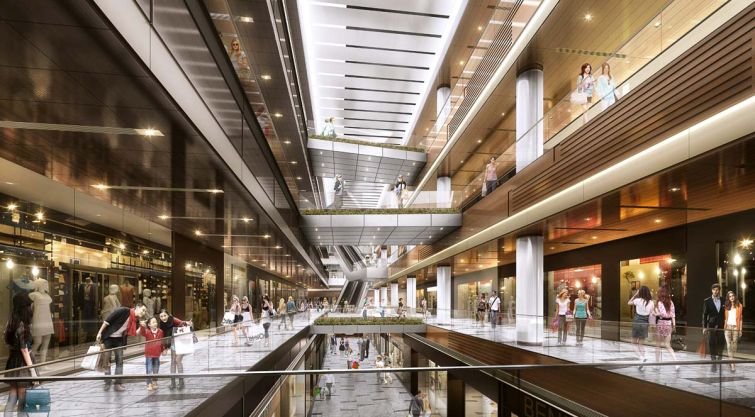 Rendering of the Shops & Restaurants at Hudson Yards. dghigliotty

The developers of a sprawling retail project on Manhattan’s Far West Side have finished shopping for the debt they’ll need to get it done.

Related Companies and Oxford Properties Group tapped Bank of China and Deutsche Bank to co-lead a $1.5 billion construction loan to finance their 1-million-square-foot Shops & Restaurants at Hudson Yards, Commercial Observer has learned. The retail construction loan is due to close in the next few weeks and marks one of the largest debt deals in 2015.

Other lenders in the deal include Crédit Agricole and Industrial and Commercial Bank of China, according to a person with intimate knowledge of the transaction. The terms of debt were not disclosed.

The seven-story retail and restaurant pavilion, which is scheduled to open in 2018, will house 100 businesses including Thomas Keller‘s new restaurant and a 250,000-square-foot Neiman Marcus that will anchor the luxury shopping center on its top three floors. Construction on the Elkus Manfredi Architects-designed project began this June with the delivery of 100,000 tons of steel beams.

The flagship Neiman Marcus store will become the first to open in New York City.

“We met [Neiman Marcus Chief Executive Officer] Karen Katz because they were in a process about two years ago where their previous private equity owners were going to take the company public,” Related’s CEO, Jeff Blau, told CO in an April interview. “We were in the midst of searching for a new anchor for Hudson Yards and so we got involved in that process really to look at it.

“I’m not sure we would ever go buy Neiman’s but it was interesting to get in the process and see what it was all about and see if there was a way we could attract them to Hudson Yards,” Mr. Blau added. “Then they were ultimately bought by Ares and the Canadian Pension Plan. When the deal closed we immediately started talking to Neiman’s.”

The Shops & Restaurants at Hudson Yards will connect two office towers on the east end of the 28-acre mega-project between West 30th and West 34th Streets and 10th and 11th Avenues. The retail destination is expected to attract more than 24 million people and generate an estimated $1 billion a year.

Another mixed-use building in the works at 35 Hudson Yards will house a 200-room hotel—the first to be run by Equinox Fitness—and is slated to open in 2018. The Hudson Yards development will contain five office and residential towers in total, among other components such as the high-end shopping center.

Related raised about $600 million through the EB-5 immigrant visa program in 2014 to help fund construction of the foundation that will support the Shops & Restaurants at Hudson Yards and three of the skyscrapers, as previously reported. The developers are in the process of raising another $600 million in EB-5 money to go towards the Neiman Marcus-anchored retail center and one of the office buildings, a separate person familiar with the matter confirmed.

A spokeswoman for Deutsche Bank declined to comment. Representatives for Bank of China, Related and Toronto-based Oxford were not immediately available for comment.