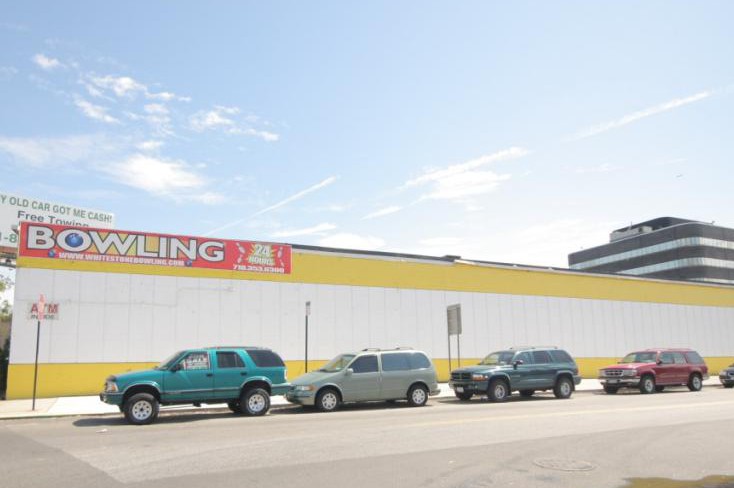 Whitestone Lanes, a beloved Flushing, Queens, bowling alley that is more than two decades old and is open 24 hours a day, seven days a week may be shuttered and pinned for a major development.

Mar Mar Realty, a family business that owns the property and the bowling alley business, has listed the one-story, 37,000-square-foot building at 30-05 Whitestone Expressway and a 43,000-square-foot parking lot for $60 million.

The building, between Linden Place and Farrington Street, sits on an 80,000-square-foot site. Pending a Department of City Planning zoning change from manufacturing to commercial and residential use, the site could accommodate a 386,000-square-foot mixed-use development, according to Cushman & Wakefield, which is marketing the property. The bowling alley was once called the “holy grail of bowling” in a New York Times article. It was also featured in an episode of the Netflix show Daredevil, according to IMDb.

The $60 million figure is based on a price of $155 per buildable square foot, listing broker Stephen Preuss of C&W told CO. He added that that is a bargain considering that Long Island City, Queens, sites are asking $250 per square foot.

As for why Mar Mar Realty is selling the site, Mr. Preuss said: It “is a private family that has owned it for decades. They are looking to exit that market and cash out.” A representative of Mar Mar Realty declined to speak to the Commercial Observer.

The zoning alteration process could take up to a year, but it could be worth the wait.

“There are not a lot of these types of sites—what I mean is mid-sized to larger development sites that could build hundreds-of-thousands-of-square-foot developments—and we have gotten strong amount of interest so far,” Mr. Preuss said.