Urban Landscape Designers are Busier Than Ever 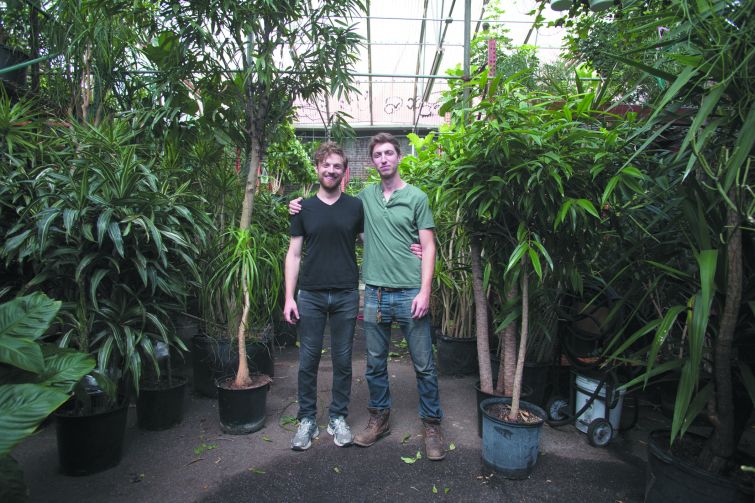 Since 1733, when Bowling Green was established “for the beauty and ornament of the said street as well as for the of the inhabitants of this city,” greenery has been appreciated for its immediate and long term benefits to New York City’s residents and properties. Street landscaping, according to a comprehensive Department of Transportation design manual, decreases energy costs, subdues street noise (“providing health and psychological benefits”), attracts customers to nearby businesses and increases property values.

This is not news, of course, yet these days developers, building owners and tenants have renewed interest in landscape design.

“We are very proud of our landscaped roofs at 250 Hudson Street and Symphony House (235 West 56th Street), as well as our straight, extensive green roof systems at 255 Greenwich Street,” said John Resnick, on trend to say the least. Landscape architects, designers and gardeners are bustling with requests for green roofs and rooftop gardens, green walls and vertical gardens, terraces, sidewalks, atriums, lobbies and every other imaginable space.

“Landlords realize this is attractive,” said Stuart Schechter, the owner of Interior Foliage Design, recalling the creation of the plant-filled 277 Park Avenue atrium in the early 1980s. “Plants and flowers are part of marketing. Outdoor spaces can reflect what’s inside.”

In 1979, when Mr. Schechter was 17 years old, he sold tropical plants from the back of a pick-up truck at ten Manhattan corners, including 47th and 6th, 65th and Broadway and 41st and Park. “The city was much different,” he said. “Back then you just tried things. Plants were very popular. They clean the air. They make people happy.”

The impromptu business involved driving to Florida with a friend to pick up plants, storing them, selling them, and returning to the sunshine state for more. Business was good for a couple of years. Then someone asked for plant care. “That account changed everything. We’d change clothes in the car for meetings. We got larger and larger accounts. Then the crash came,” said Mr. Schechter, who has survived a few. “We lost some work but people always had to have the appearance that things were fine. One piece can soften a lobby.”

Today, from a 5,000-square-foot greenhouse and 16,000-square-foot warehouse and yard in Long Island City, Mr. Schechter runs one of the city’s largest landscape design firms with his brother Phillip, sons Ian and Matt and a staff of about 25 who design, install and maintain green space and individual pieces.

Plants, containers and planters fabricated by Interior Foliage Design and its subsidiary Greening Stone (dedicated to outdoor work) can be seen in and around buildings citywide: Saks Fifth Avenue (frontage), Giorgio Armani, 760 Madison Avenue (roof), 515 Madison Avenue (terrace), 45 Main Street, Dumbo (hallway) and countless others. Boxwoods and red maples were en route to 131 Varick as we spoke. And plants used temporarily line the space. There’s a tree from Jon Stewart’s farewell party (cherries and lindens were craned in to the flight deck of the Intrepid) and there’s a lime tree from a Corona commercial. Fashion Week rentals are up next (picture walking through an English garden or Hamptons estate before entering a tent).

Before we leave, we climb two ladders to a green roof planted two inches deep with self-sustaining succulents (they hibernate in winter). Rainfall on roofs, sidewalks and roads results in runoff that leads to floods and polluted rivers and other waterways. Green roofs slow down the flow and help evaporate water, explained Ian. They also reduce energy costs by cooling down otherwise hot, exposed surfaces.

Urban landscaping in New York—also called greenscaping—is unlike anything, or anywhere else.

“The image of a guy on a lawnmower? That’s not my world,” said Danny Sponzilli, the chief executive officer of Sponzilli Landscape group. The NJ-based firm Mr. Sponzilli’s dad started 46 years ago (his brother works there, too) specializes in massive, complicated urban projects like Yankee Stadium, Brooklyn’s Barclays Center and the new Whitney Museum downtown. “Years ago people didn’t appreciate landscape design the way they do today. Architects and developers are realizing outdoor amenity space is equally important as the interior.”

Of course, in an urban environment that means things like permitting and street closures. “There’s the city below the pavement as well as above,” said Mr. Sponzilli. “It’s cool.”

Last month, his firm shut down part of 57th Street for 8-hour overnight blocks to complete the new roof over Carnegie Hall. Tools involved included cranes and pneumonic soil blowers. These blowers can blow soil up to 14-stories high. Carrying the necessary 2,500 cubic yards of soil (200 truckloads) would have taken two months. Instead, the process took five days. As with any green space, everything starts with the soil. This batch was engineered to drain well and carry the right nutrients to the 40-foot trees (maples and hornbeams) and other plants.

Landscaped rooftops are a trend Mr. Sponzilli noticed around 2006 when working on the Metropolitan Museum of Art. “About that time developers were starting to want to maximize dollar per square foot and create an amenity space that takes advantage of views, roofs and courtyards.” 2008 slowed things down but momentum returned. Sponzilli has landscaped roofs for the likes of the Battery Park City Conrad Hotel and the Park Avenue headquarters of J.P. Morgan Chase. Farms are part of the current trend too, generally meaning a few flats included for growing edibles.

“Urban landscapes have changed dramatically in the past 40-something years,” said Jason Hellendrung, principal, Sasaki Associates, which created Greenacre Park (217 East 51st Street) for Abby Rockefeller Mauzé to provide New Yorkers “some moments of serenity in this busy world.”

Around 1970, cities were in the midst of urban renewal and areas of downtowns were being raised and redeveloped, said Mr. Hellendrung. “In New York this was the time when Robert Moses was at his height. Cities were turning their backs on streets and street life, creating urban parks that were elevate above the street or sunken plazas below the street,” he noted.

Sasaki recently analyzed property values in Pittsburgh, part of a larger study including New York City’s High Line and Brooklyn Bridge Park, that showed reviving riverfront access with parks and trails led to a 60 percent increase in nearby property values, from 2002 to 2013. The citywide average was 32 percent. “The pattern in Pittsburgh and in other cities across the country is clear: properties with close proximity to high quality park infrastructure increase in value more than properties that do not,” reads the report.

A 2007 report said New York City had fewer acres of public green space than any other U.S. city, prompting the city to set a goal of having park space within a 10-minute walk of every resident by 2030. 109 acres of new parkland were added in 2014. Green space and greenery in and around commercial buildings supplements and enhances this initiative.

Few locations showcase that complement more than 7 Bryant Park, on the southwest corner of West 40th Street and Avenue of the Americas. “We couldn’t carry Bryant Park across Sixth Avenue,” said Tommy Craig, head of Hines’s New York office. But they did want to be connected. “It would be more natural to put retail in a corner space, but we created an orientation into the park, an arrival sequence that’s unlike any other building on Sixth Avenue.”

He’s talking about plants and benches under the entry canopy (public space!), and the 547-square foot (24 feet long by 16 feet high) curved wall full of 4,000 tropical plants (33 species) in the lobby, created by Manhattan-based Vertical Gardens Technology. Look for white anthurium and peace lily flowers, yellow gynura and purple hearts, which are pink.

“A vertical garden enhances the beauty of the space, cleans the air and provides oxygen,” said designer Marie Christine Steffanetti, citing research by NASA. “Plants are capable of cleaning indoor air of toxic chemical soup that is common in modern buildings.”

Through the process known as transpiration plants actually cool their surrounding environment slightly. With each additional plant this increases and therefore a green wall, with hundreds of plants, can reduce the temperature of a room by anywhere from 3 to 7 degrees centigrade. Some studies have shown that interior green walls can cut electricity bills by up to 20 percent.

Ms. Steffanetti and her partner Laurent Corradi, a hydraulic systems engineer, founded Vertical Gardens Technology eight years ago, following a patent for their system. Since then they’ve created vertical gardens (a k a living walls) for clients like Lincoln Center, Devoción (a Williamsburg cafe that wanted a Colombian “forest” to complement their Colombian coffee) and Phyto Universe (a Manhattan spa/salon that wanted botanicals as a nod to the ingredients in their products).

Installing the hydroponic garden at 7 Bryant Park was a nearly six-week process: a month of construction and 10 days of planting. In this and every vertical garden the thirstiest plants go to the bottom, near the water and nutrient source, and the trees go to the top so they can create a canopy.

Studies say by diverting awareness from the self to the scenery, vertical gardens (like a walk in the park or other natural setting) can elicit positive physiological responses. If you don’t believe plants can be calming, walk into the David Rubenstein Atrium at Lincoln Center and just try to stay anxious.

“An open, accessible and inviting environment—that is an essential goal of Lincoln Center,” said Mr. Sewhcomar. And now, in part thanks to the greenery, that goal is being realized.

Emphasize landscaping and people will come.

“People don’t want to wait. They want to move in tomorrow. A landscaped terrace raises the value of an empty space,” said Mr. Schechter.

And if mini-vans loaded with spiral arborvitaes (perfect for dramatic entry doorways), pencil cacti (perfect for minimalist design), corn plants (perfect for zero sunlight) and bamboo (perfect for screens) are a sign, the value of greenscaping is appreciated citywide.