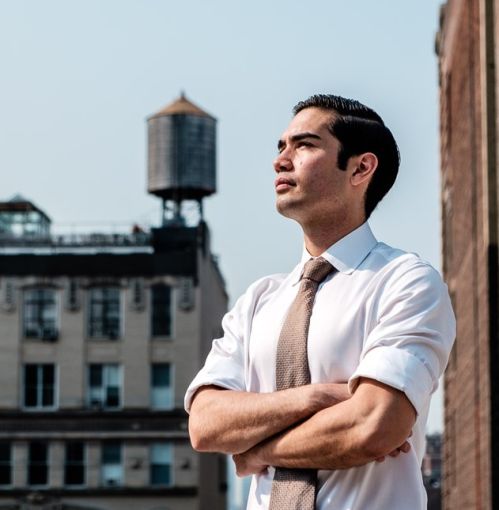 From most everywhere in New York City an upward tilt of the head offers an appealing view, a sight you cannot replicate anywhere else. Not the skyscrapers and spires—even though, yes, they are standouts indeed—but something more uniquely New York City: rooftop water towers.

Their likenesses and silhouettes appear in countless works of art and the towers themselves—also called tanks—have even served as canvases, too (check out The Water Tank Project, a global clean water awareness campaign supported by more than a dozen members of the real estate industry). That said, visual stimulation is just a byproduct when it comes to these structures so vital to New York City life.

“A lot of people think they are out of service or abandoned, but they serve a vital need,” said Henry Rosenwach, the 26-year-old scion of the Rosenwach family whose name is synonymous with this New York phenomenon. “Until water is gone people don’t care. It’s such a simple thing.”

Mr. Rosenwach paused and wondered aloud whether the simplicity is the cause of the disconnect, recalling a documentary in which people in Washington Square were asked to identify water towers. Half did not know what they were. “And they weren’t event tourists, they were New Yorkers. I don’t know. It’s very weird to me.”

Water towers should be more on people’s brains now, however. The first thing you should know about water towers is that they are not cooling towers, though they may share a roof. (“The term ‘cooling tower’ means a cooling tower,” the city’s Administrative Code explains in a Gertrude Stein sort of way. “Evaporative condenser or fluid cooler that is part of a recirculated water system incorporated into a building’s cooling, industrial process, refrigeration, or energy production system.”) Rooftop water towers store water for domestic use (drinking, showers, laundry) and fire suppression.

At the end of July, the Department of Health and Mental Hygiene (DOHMH) began an investigation that ultimately linked a Legionnaires’ disease outbreak in the Bronx to cooling towers. In August registration of cooling towers, fluid coolers and evaporative condensers became mandatory for building owners, followed by an inspection with proof order.

For companies like Rosenwach Tank, one of three primary water tower manufacturers and installers in New York City, that meant an uptick in calls, and a whole lot of explaining, mainly about the basics.

Rosenwach does make and service cooling tanks through a subsidiary—Cool Water Technologies—but we visited the Long Island City headquarters to meet Henry Rosenwach and talk water towers and history. Rosenwach Tank has made the iconic, mostly wooden containers for taller buildings (think elevators; over six stories) since 1896. The company installs, cleans and repairs them, too.

Accordingly, Rosenwach water towers can be found in every borough, on top of buildings of all scales, including 30 Rockefeller Plaza and newly developed 432 Park Avenue. And though neither the city nor Rosenwach Group can say exactly how many water towers there are (17,000 is the high estimate) or how many were installed by Rosenwach, you’ve undoubtedly washed your hands in their water tower-stored water.

Here’s how it works: city pipes bring city water to building basements where pump stations pump water up to the tank on the roof. The rest is all about gravity, a main reason water tanks rarely malfunction.

In fact, water tanks are so reliable, said the fifth-generation vice president of the family firm, that nobody cared about them until Superstorm Sandy (when some of the tanks ran out) and recent rooftop tank news.

Before officially joining the company in 2013 (read: career vs. short term jobs) Mr. Rosenwach spent two years at Cohen Brothers Realty where he absorbed lessons of real estate and management from Charles Cohen and other executives. “I was able to see how management saw our company, from that side of the coin. Mr. Cohen is a top-notch individual. Sitting in a room with him and the people who give him guidance taught me how to speak to people of that stature and class,” said the Vanderbilt graduate, modestly considering landlords and “fancy” corporate offices a league apart from his construction-like day-to-day.

“It’s a whole different atmosphere,” he said, from a desk in front of a display of antique tools, in a windowless office loaded with job site specs and awards plaques. “After our meeting I’m going to be on the subway, sweating and climbing tanks for the rest of the day.”

A day that started like most days, six a week, at 7 a.m. as a vice president closely linked to the CEO: Henry’s father Andrew runs overall operations (a symphony of employees and jobs, “90 percent of the city has his cell number,” said the younger Mr. Rosenwach). Andrew’s last, and perhaps only, vacation ever was the day of Henry’s college graduation. Henry—between inspections, collecting water samples, meeting clients, managing insurance—learns from him daily.

“‘Welcome to hell,’ dad says, trying to break me. There’s no job too big or small. We’re sales, marketing, you name it. We figure it all out. There’s no school for this.”

Careers at Rosenwach start on the truck: delivering materials, removing debris. Henry refers to this and other outdoor work as the “boots and jeans” side of the job. “If you don’t do that then you really don’t know how the men operate, timing, what certain things entail. Those were some fun summers.”

Henry holds a real estate salesperson license, a Real Property Administrator designation from BOMI, and recently finished two NYC Fire Department Certificate of Fitness exams: S-12 (City Wide Sprinkler Systems) and S-13 (City Wide Standpipe System). He’s working toward a variety of other certifications and licenses, and applying to NYU Stern. Andrew, who is also a licensed Master Plumber #949 and a Fire Suppression Contractor #276B, got his MBA there.

Henry’s sister Alissa is an interior designer with another company, but she could easily find a place at Sitecraft, Rosenwach Group’s outdoor furniture subsidiary. Look for their wooden benches and planters at the likes of Hudson River Park and Google at 111 Eighth Avenue. The company relocated its Williamburg-based manufacturing to Somerset, N.J. two years ago (selling the site on Wythe Avenue between North 9th and 10th Streets) and plans to move all operations there in the coming months. For now, manufacturing happens in Long Island City.

Incidentally, the majority of water tanks are wooden because wood is less expensive, doesn’t freeze in winter and easy to lug upstairs in pieces.

Rosenwach also runs United Tower Maintenance, AMR Mechanical (a plumbing contractor) and Herbert Rose Building Restoration. “We make it our priority to meet all the standards and be a one-stop-shop to customers,” said Henry. That now includes annual filings of domestic water tank inspection and quality reports. Splashbox.nyc is a site created to manage building certificates and correspond directly with the DOHMH—cleaning is the domain of the DOB.

In the past ten years, said Henry, proudly citing the successes of his kin—“People still talk about my grandfather. He ran the tank game,”—tank exteriors went from black (tar) to tan DynaGrip covers (introduced by Andrew). The covers create a thicker membrane around the tank, elongating lifespan (most last about 30 years), a revolution in the industry. Andrew also updated controls and ultrasound sensors and invented the recently patented two-compartment wood tank. Maximizing space on the roof is as important as everywhere else.

A new technology may supplant the humble water tower someday but with current and new building construction, tank replacements and their real estate holdings Rosenwach has never been busier.

“They don’t look glamorous,” Henry momentarily conceded before retracting with examples of artists and other appreciators of the urban beauties. “Water towers are something New York can call its own. And we’re happy to be a part of it.”